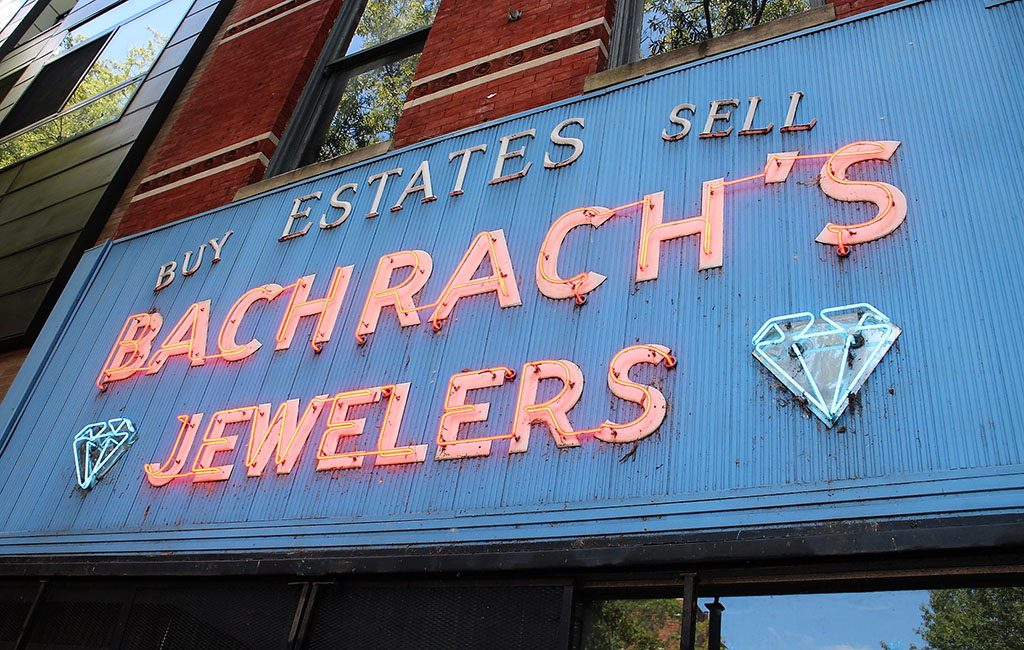 “(My mom) had gotten a call saying they were going to close,” Kiritsis recalled. “We’ve been getting our silver from Bachrach’s since I was child.”

After nearly 130 years in Richmond and more than 50 years at 111 E. Broad St., Bachrach’s closed on Halloween in 2016, liquidating its remaining assets and placing its three-story, 5,250-square-foot building up for sale by Christmas.

At the same time, business was booming for Emilie, who owns and operates fitness and health website GoFor20.com and was looking for more space for her business.

She searched all over the city, including Manchester and Scott’s Addition, but a nostalgic walk downtown led her toward what she was looking for.

“I grew up in Midlothian, so I remember coming downtown to get new shoes, and taking pictures with Santa at Christmas time,” Emilie said. “My dad bought my mother’s engagement ring from Schwartzchild Jewelers when they were down here.”

That’s when she noticed the “for sale” sign at the shuttered Bachrach’s building.

“It’s such a beautiful building that still retained original Richmond architecture from when it was built in 1886,” Emilie said. “It seemed like this was where we needed to be.”

Emilie and her husband Paul Kiritsis, an orthopedic surgeon and sports medicine specialist with Richmond-based OrthoVirginia, purchased the building last month for $392,000, according to city tax records.

The property was most recently assessed for $303,000. Brokers Ann Schweitzer Riley and Tom Rosman of One South Commercial worked the deal. 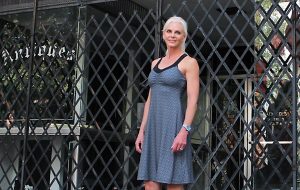 The deal is the couple’s first commercial real estate investment in Richmond.

Emilie said they are determining how best to repurpose the structure, but said it will have retail on the ground floor and apartments above.

“I plan to carve out a space for GoFor20.com, and lease the remaining space,” she said. “Whatever we do, we want to complement what is already on Broad Street.”

The couple plans to use their own capital to finance the project and is still carving out a budget. Emilie said they are exploring the use of historic tax credits for the overhaul, and are working to secure an architect and general contractor.

“I want to restore the building to its former glory,” Emilie said. “I want this building to really stand out downtown.”

But getting there may prove challenging.

Ground-floor access to the building’s upper levels was sealed off at some point in the past, prompting the Kiritsis’ to access the top floors via a ladder from the ground up to a second floor window.

“It looks like time stopped,” Emilie said of the upper levels. “There are papers from the 1930s scattered about, gas lamps from when the building was powered by gas and old dental slides from when a dentist operated in there … it’s pretty creepy.”

Then there are the safes – five from Bacharach’s on the first floor, with the largest weighing between 8,000 and 10,000 pounds.

“We have to get the safes out,” Kiritsis said. “That will allow us to better plan for the space we have and what we want to do with the building.”

As for the neon Bachrach’s Jewelers sign that still hangs above the doorway, Emilie said she and Paul are trying to find it a new home.

“We really want to restore this building properly,” Emilie said.

Momentum along the Broad Street stretch of downtown continues to gain steam as investors and business jostle for frontage.

Richmond-based Monument Cos. last month purchased the Sunny Men’s Wear building at 326 E. Broad St., where it’s teaming up with EAT Partners’ owner Chris Tsui to open a restaurant along with 20 apartments.

Thread Count Shirts is preparing to open at 209 E. Broad St. in a building redeveloped by UrbanCore development, and children’s clothing retailer Little Nomad opened at 104 W. Broad St. after shoe retailer Round Two moved to 202 W. Broad St. in 2015.

Emilie said the new businesses, along with the prospect of additional development, prompted her and her husband to act on the Bachrach’s property.

“I can remember when this area was a really bustling place, and coming down here with my father who worked downtown,” Emilie said. “To see where downtown was more than a decade ago to where it is now is incredible. I’m glad that we’re going to be a part of it.”