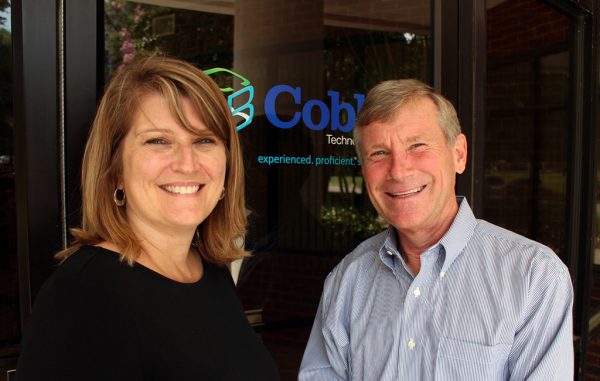 If you’ve listened to Richmond radio in the past 20-plus years, chances are you’ve heard those ubiquitous, self-described “terrible” ads from Cobb Technologies featuring Freddy and Toni – owner Freddy Cobb and company president Toni Gorveatt.

And if you’ve heard the ads lately – if you didn’t change the station or turn off the radio first – you may have noticed something different, a self-awareness of sorts: Freddy and Toni embracing the “worst radio ads” title bestowed upon them for years in local best-of lists.

As Freddy tells Toni in one recent spot: “Cobb is known for its terrible radio ads, and I’m proud of that. We’ve got to uphold the time-honored tradition of worst radio ads. We dominate our competition in price, service and quality, so I thought I’d throw them a bone in the radio category so they wouldn’t feel so bad.” (Audio below)

While the ads have always been a bit tongue-in-cheek, this recent push to an even more self-deprecating approach spurred BizSense to sit down with Freddy and Toni to ask them about that creative strategy, how Freddy comes up with his “terrible” ideas, and how those “worst” ads have ended up paying off for the company, which sells printers and copiers and recently moved and expanded its Henrico headquarters on the heels of its 25th year in business.

Richmond BizSense: You’ve been making these “terrible” radio ads for more than 20 years now. How did the idea for them come about?

Freddy Cobb: I wrote them, and I just thought it was fun to be funny, to make them memorable. I knew I wasn’t good enough to have good memorable ads, so we had bad memorable ads.

Toni Gorveatt: I think some of the shtick on how I feel about the ads and how Freddy is, that has rolled from real life. I’m always giving you a hard time for some of the crazy things you do, and I think it just kind of blended.

Freddy: You’re not the only one who does that, by the way.

Toni: We give each other a hard time, even off the radio. So it wasn’t hard to get there.

Freddy: It pretty much came natural, and then I would write the bickering into the ads, a lot, and so people always ask me about my wife, because they assume, because there’s so much bickering going on – says something about the state of marriages, I guess. But that was part of the fun too.

We tried at one point to do something that was a lot more calm and professional, if you will, and they were so boring. 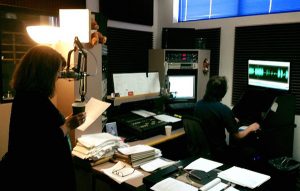 RBS: You’ve had an on-again, off-again catchphrase, “Cobb it.” Where did that come from?

Freddy: That came from my kids. Their teacher said she was going to Xerox something, and they corrected their teacher and said “No, you’re not going to Xerox it. You’re going to copy it.” Then we’re sitting at the dinner table and one of the kids – they fight over who gets credit for this – said, “Daddy, you shouldn’t say ‘copy it,’ you should say ‘Cobb it.’ That’s where it came from.

Toni: I’ve never heard this story. Well then, I like it a little better now.

RBS: So the shtick was reflecting reality in that, Toni, you were a little reluctant to do the ads?

RBS: Did you feel like your job was on the line if you didn’t do them?

Freddy: (laughs) No, I was worried my job was on the line!

Toni: I never felt like my job was on the line. I also would never have not done them. Doesn’t mean I had to like them.

In reality, doing the ads and being silly and the whole banter, I think, has played in our favor substantially. My not liking the ads got to a point where I wanted everyone to really know what we did here, that we have some depth in what we actually provide. And it has been challenging to tie those two together through the years.

Freddy: Real challenging for me, since I don’t know what you do.

RBS: How have you tackled that challenge, of blending the humor with the message in your ads?

Toni: Our industry was evolving, and we were evolving. We weren’t just a copier and fax dealer, so how do you let the community know that you do these other services?

I will admit, when we backed off of the “Cobb it” and tried to inject more of that content, they’re not as exciting, they’re not as fun. So you’ve got to put them out there and then you circle back around and attract people to the ads with the “Cobb it” or whatever we decide to do that’s silly. But it is a challenge, because you’ve got 60 seconds.

RBS: Did you ever consider working with an ad agency? Was it a conscious choice or a budget decision to do the ads on your own?

Freddy: We had worked in the very early days with an ad agency. We were founded in Lynchburg – Toni wasn’t on board yet – and we did have an agency, and then when we came to Richmond, I think I just sat down and started writing.

Our message early on was we’re locally owned. A lot of the companies had been bought and sold, they were rolling up into these huge companies, so our message was: stay local, we’re going to be more responsive. Then we started blending that with the humor.

Toni: I think we gravitated towards radio because (Freddy) understood buying radio and it was a way to reach a higher segment of the population. We dabbled a little in TV early on, and you did some billboards early on – we worked with Alpha (Media) in Tidewater and Lamar (Advertising) here. But radio has been the steady…

Freddy: It’s been there, for better or worse. 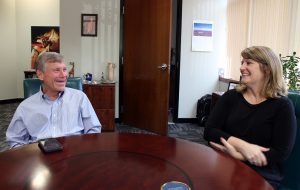 The duo has been working together at Cobb for 24 years. ‘We give each other a hard time, even off the radio,’ Toni said. (Jonathan Spiers)

RBS: What was the thought-process behind this latest series of ads where you’re consciously poking fun at yourselves and aware of how your ads are being received?

Toni: I think the reason we’ve stayed that course is solely because it gets attention. We do have the few calls and get the people who, I’m sure, have heard it one too many times. I think there’s also a large portion of the audience who finds humor in them.

How many ads come and go on the radio, and once they’re gone, they’re gone – you don’t remember anything really about the company. Even if people don’t always hear the message, they do identify these two people working for Cobb and we’re local. There’s recognition there, which I think a lot of companies over 25 years still haven’t been able to achieve.

RBS: How many new ads do you do in a year? Do you have an annual budget you spend on advertising?

Freddy: Not just radio – there’s a lot of other stuff: the Virginia Tech (ad), the (Richmond Flying) Squirrels billboard and suite, UVA sponsorship, the Hermitage High School (ad). They start adding up.

RBS: Freddy, how do you come up with a new script? How do you keep from repeating yourself?

Freddy: I’m not sure I do. Clearly that has been known to happen. Sometimes I’ll just be doing something mindless and your mind’s running.

Toni: Current events sometimes. Sometimes you tie into stuff that is happening in our industry, or you tried a little politics. With the election, you did something around that. Not that that’s the focus of the ad, but there’s stuff that sparks an idea with you.

Freddy: I guess just like all of us, when you’re in the shower, you’re thinking crazy stuff; a long drive; or maybe you read an article and go, “Hmm, I could do something from that.”

RBS: Are there other local companies whose commercials you feel stand out in a similar way?

Freddy: Some good ones that hit on local is that Gene Cox one where they’re riding around – Elephant Insurance. That’s a good ad. That’s TV, but that’s definitely one I look at and go, “Boy, we’re thinking alike on that one.”

Freddy: Our competition in this in the Richmond Magazine (best and worst list) – they usually have a runner-up and a third place, and those are usually clearly of our ilk, they’re not very good ads. And it’s the Midas guy, Mark (Smith) – his are memorable and bad, and I know Mark, and I tell him, “Hey man, sorry” – and James River Air. He’s got some really memorable stuff.

Toni: I hate to say it, but I never listen to local radio anymore.

Freddy: (whispering) I don’t either.