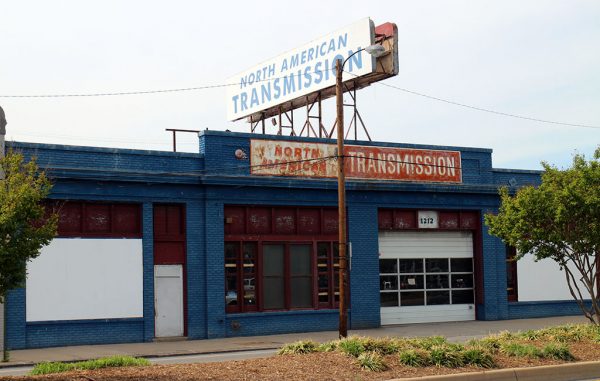 Auto repair shops are becoming a hot commodity along the Boulevard.

One week after the Woody’s Auto Service building on Myers Street was sold for more than $1 million to make way for a AAA location, a local franchise of fellow car care chain Midas purchased the North American Transmission building at 1208-1216 N. Boulevard for $1.29 million.

Midas of Richmond purchased the 15,575-square-foot building in a deal that closed Monday. The seller was the family of Albert and Annabele Chiocca, who owned the building since at least 1999, according to city property records. A recent city assessment valued the 0.37-acre property at $655,000.

Mark Smith, owner of Midas of Central Virginia, which totals four locations including Midas of Richmond’s two shops, in Short Pump and near Willow Lawn, said he had been eyeing the North American Transmission building for years. The transmission shop had leased the building until it closed last year.

“I’d hunted that specific location for probably three years,” Smith said. “I love the market; I love the fit it has for other stores. I think there’s a great play to be made there.”

Smith said he’ll invest $750,000 into renovating the building, which has served as an auto repair garage since it was built in 1927, save for a stint as a dry cleaning facility in the ‘40s.

Smith said the renovations will stay within requirements for historic tax credits. It will renovate the interior, which features skylights, and the exterior, notable for its billboard signage on the roof.

The shop will include spaces for other organizations Midas of Richmond works with, such as Virginia Blood Service and FeedMore. Smith is working with Susan Orange and Ray Trevillian of Baskervill on designs. Capstone Contracting Co. is the general contractor. 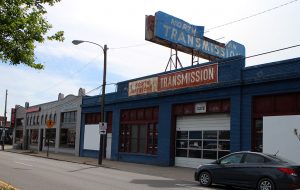 The building will be Midas of Central Virginia’s fifth location in the region – and just a block away from the planned AAA center at the Woody’s Auto building at 929 Myers St. Smith said he’s not concerned about the neighboring competition.

Smith said he is aiming to open the location in September.

While the historically industrial Boulevard corridor and neighboring Scott’s Addition have attracted new users in recent years, the Midas and AAA transactions buck that trend, with similar users filling space that has been used in those ways for decades.

Goode, who with Toy handles leasing at Scott’s Addition’s redeveloped HandCraft building, said the North American Transmission building attracted interest from a variety of potential users, from office tenants to restaurants to entertainment venues, since it was listed for lease about a year ago. He said the property’s lack of parking and required renovations turned most parties away, the majority of whom were interested in buying rather than leasing.

“We had various scenarios to redevelop the building. We couldn’t find the right fit,” Goode said. “The owner decided they could sell it, and we had a lot of people interested in buying it.

“The Scott’s Addition market is in such an evolution right now. We had a lot of different users look at the building,” he said. “But the parking was the main thing.”

While new uses such as bar-arcades and a bowling alley are rolling into the neighborhood, Goode said these more recent transactions should come as no surprise considering the buildings’ past use.

“I don’t find it surprising that you have two buildings that have been used as auto service for decades to be used that way again,” Goode said. “The bottom line with Scott’s Addition is it’s the commercial real estate market that ultimately determines what uses and rents will be.”

It has already had a long life as an auto shop. Mark Smith is also an incredible employer and asset to the greater Richmond community. SA is fortunate to have him join the neighborhood.

He is placing it where it should be…in a commercial corridor full of gritty buildings.

I’ve been all through the streets of SA and I just can’t see where the appeal is…there is none. With all of the beautiful neighborhoods throughout RVA- this isn’t one of them.

Jack Smith – Scotts Addition has a long history – just because it recently (very recently) became hip with a few trendy spots and new housing, doesn’t mean that is the only road it will follow. If anything, the car repair shops have more of a position to complain about all the hipster eateries opening up around them! I am sure all the folks that rent apartments in Scotts Addition (there are very few home owners, right?) would love for the neighborhood to transition to “their tastes” but the fact is all those renters are mostly new and too many… Read more »

Really?!?!?! This is good news? It was bad enough when Cort Furniture moved in. Now a bigger auto repair shop and a Midas? Maybe new Walgreens and Rite Aid will move in to make the lameness complete.

That’s what’s amusing. People are moving into an industrial area because they want it to be ‘hip and cool’. Scott’s Addition is and has been for a long time, an industrial park. Why people would move there instead of places like the Fan with more residential properties and green spaces is beyond me. SMH

Amusing to read criticism of industrial operations in an industrial zone that is still zoned industrial.

I personally don’t see the appeal of living in an area with virtually no trees or green space, but hey, go spend $1.x mil on a brownfield warehouse and call it ‘lofts’…

Mark Wise you are spot on. I remember when most of the ‘trendy’ areas of Richmond (Scott’s Addition, Manchester, Shockoe Bottom, et al) were blue collar industrial areas.

Mark Smith here — yes, Midas of Richmond will be coming to the Boulevard — bringing 8 to 10 career opportunities, a bigger footprint for VA Blood Service, more awareness for FeedMore, a Loaner Library for anyone and everyone who chooses to enjoy it just like we have in each of our stores and an expanded childhood literacy/early education effort. Complimentary Loaner Cars — an expanded pick up and drop off program. And, Brakes, Oil Changes, Tires & Total Car Care I accept the fact that those who oppose our move, won’t be swayed by this — I also realize… Read more »