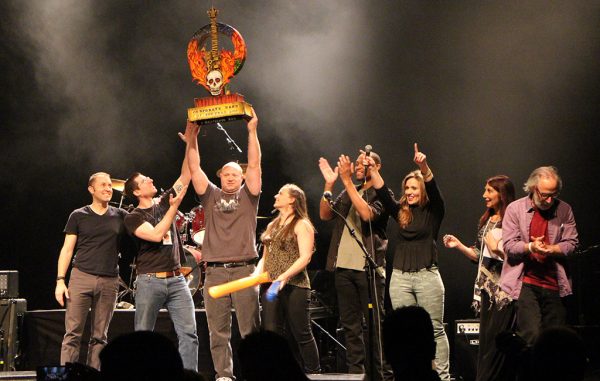 Richmond’s “corporate rock” crown is back on the line this weekend, as bands representing three local companies vie for the “golden guitar” trophy at the second annual Battle of the Corporate Bands.

Last year, it was WestRock’s Glass House that rocked the house en route to winning the title of Best Corporate Band. It will be back Saturday night to defend its title at The Broadberry, facing off against returning competitors Class 5 from Dominion Energy and newcomer 951 East, representing downtown law firm Hunton & Williams.

The night also will include a performance by a youth band from Mako Music School, which turned heads last year with selections from the musical “American Idiot.” Proceeds from the battle benefit Firehouse Theatre, which puts on the event.

Five bands faced off at The National last year, drawing about 200 attendees and raising approximately $6,500 for the local theater. While this year’s contest involves fewer competitors, Joel Bassin, producing artistic director for Firehouse, said the performances would be no less impressive.

“I haven’t heard 951 East, but I’ve heard buzz,” Bassin said. “Everybody says that these lawyers are really rocking out.” 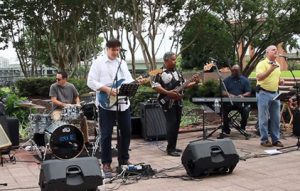 While not a new group, having formed two years ago to perform at company events, 951 East’s participation in this year’s battle is a result of last year’s event, when Hunton & Williams attorney Sherry Hutter was in the audience as a then-member of Firehouse’s board.

When Hutter inquired about the law firm participating this year, she learned it already had a band to enter, made up primarily of IT employees.

“I didn’t even realize we had a band,” Hutter said. “When I saw them perform and they were really good, I thought: wow, these guys need to perform in the community and compete in this competition.”

Sassine said they’re planning an eclectic set, including the Georgia Satellites’ “Keep Your Hands to Yourself,” The Doobie Brothers’ “Long Train Running,” and a medley of Gloria Gaynor’s “I Will Survive” and Daft Punk’s “Get Lucky.” 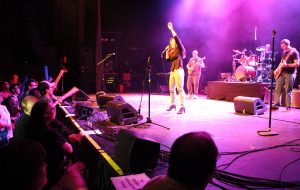 Kat Simons from Mix 98.1 again will emcee the event, which will be judged by Matt Treacy of Sound of Music and Free Jambalaya, Marie Folden of Battle Music & Entertainment, and Justin Bailey of Black Iris Music. Corporate sponsors for the event are Sam Ash Music Stores and Ellwood Thompson’s.

Tickets can be purchased at The Broadberry and on the Firehouse Theatre website. They cost $20 each for general admission on the floor, and a limited number of reserved VIP seats are available for $40 each.

Doors open at 7 p.m. Saturday, with the battle beginning at 8.

[…] This year’s battle was held at The Broadberry, drawing 320 attendees and raising approximately $6,500 for the theater. The night also included a performance by a youth band from Mako Music School. […]