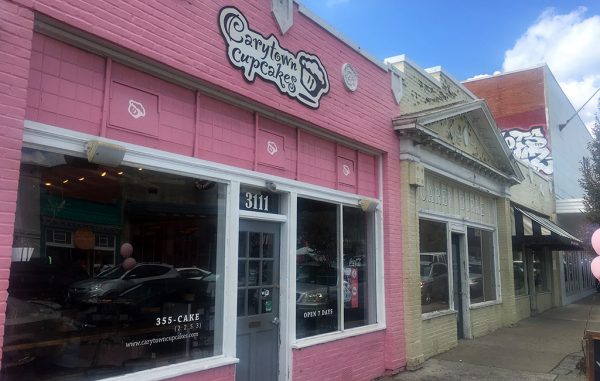 It turns out cupcakes won’t be on the menu to fill part of a longtime Carytown rug shop.

A new bar dubbed The Jasper is slated to take over 3113 W. Cary St., space currently occupied by Carey Burke Carpets, which is closing.

The Jasper is led by Kevin Liu, owner of neighboring Carytown Cupcakes, along with Mattias Hagglund and Thomas Leggett formerly of Heritage and The Roosevelt, respectively.

BizSense previously reported on building permits that described work on the space as an expansion of Carytown Cupcakes. But Hagglund said the spot will be a late-night, after-dinner destination focused on drinks, as well as small plates and appetizers.

“We three are big fans of well-organized and well-done cocktails, but we’re also going to have cheap domestic and nice local beers. (It’ll be) a little bit of everything for everyone,” he said.

Hagglund is the former owner of Heritage, which he sold last fall, while Leggett tended bar at The Roosevelt. Liu owns Carytown Cupcakes and The Tin Pan.

The Jasper is named for Jasper Crouch, a bartender and caterer in Richmond in the 1800s. Crouch was a freed black slave and Chief Justice John Marshall’s top drink maker at Marshall’s Quoit Club, a social club that met during the summer.

The group is targeting a late 2017 opening for the new bar. It’ll have roughly 72 seats, with 14 available at the bar.

While Liu is already established in Carytown with his cupcake shop, the other two co-owners are bullish on the neighborhood.

“For what we’re trying to do with a bar-focused environment, Carytown is the place to be, at least for something that’s truly a bar,” Leggett said. “Portrait House was kind of pioneering in bringing late night back (to Carytown).”

“The last few years there’s been an increase of nicer dining and drinking options instead of the takeout spots that have always been there, and are great, but it seemed like the time was right to come in,” Hagglund said of Carytown.

Work on the Jasper is already underway, with WillHouse Construction as the general contractor. Johannas Design Group is the bar’s architect and Campfire & Co. is handling interior design.

Carey Burke Carpets remains open in the other half of its space, with owner Rick Poh planning to close it as he prepares to retire. The Jasper is leasing its space from Poh, who owns the property.

[…] the other side of West Cary Street, work is underway on The Jasper, a bar slated to open in late […]