The two merging companies will rebrand as Touchstone Bank.

When locally based Bank of McKenney announced in June it would acquire Citizens Community Bank in South Hill, Virginia, the two institutions said they would search for a new brand to better reflect the combined franchises.

After hiring a Richmond marketing firm and going through dozens of names, they’ve found their new moniker.

The banks announced Tuesday they’ll rebrand as Touchstone Bank, pending approval of Bank of McKenney shareholders and upon closing of the deal, as expected in November.

“In the past, a touchstone was used to test the purity of gold and silver,” said CCB chief executive James Black, who will be CEO of the combined companies. “Today, anything that tests the standard of quality is considered a touchstone.”

The all-stock deal, valued at $19 million, will create a combined Prince George-based company with $447 million in assets and 13 branches covering McKenney’s territory on the southern edges of the Richmond region and CCB’s reach in South Hill, Gasburg and Boydton, as well across the North Carolina border in Roanoke Rapids, Henderson and Louisburg.

Black said the banks enlisted Richmond-based Free Agents Marketing to come up with names. A long list was whittled down to a few, with Touchstone Bank emerging as the frontrunner approved by the boards of both sides, he said.

He said the goal and challenge in coming up with a new name was to play off “the adjectives we used to describe ourselves.” 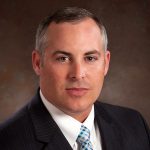 “You conduct a soul-searching and cultural process that identifies your values and aspirations,” Black said. “We talked with customers and employees and we identified those key values and strategic objectives.”

Assuming shareholder approval, signage on the combined bank’s branches will be replaced with temporary Touchstone Bank signs the next business day after the deal closes.

The combined bank, like Bank of McKenney, will be publicly traded and a new ticker symbol will be needed and is yet to be determined, Black said. He wouldn’t comment on how much is being spent on the rebrand.

Bank of McKenney CEO Richard Liles was not available Tuesday to discuss the rebrand. Upon closing of the deal, he’ll serve as a salaried executive chairman through 2018.

2 local bank deals get thumbs up from regulators - Richmond BizSense