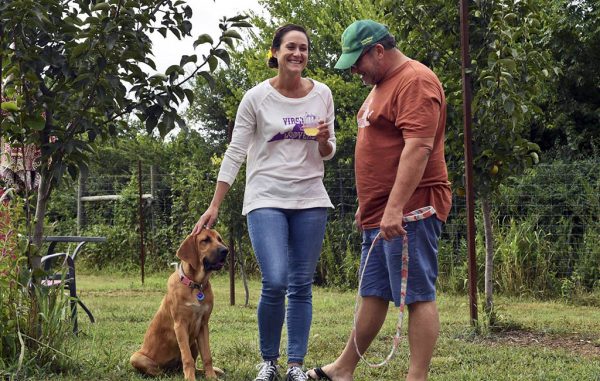 Liza and Eric Cioffi moved to Goochland from California in 2013, and launched the cidery in 2016. (Photo credit: BigTree)

It’s been a hectic six months for Eric and Liza Cioffi.

In late March their Goochland County home, which sits on a farm next door to their business, Courthouse Creek Cider, was destroyed in a fire.

Now, their business and their family are on the move – in multiple directions. The couple and their kids are preparing to move back out to the farm at 1581 Maidens Road. They’re also expanding their business to the Richmond’s most competitive neighborhood for booze makers.

Courthouse Creek Cider is opening a tasting room in The Highpoint building, which is being redeveloped at 3300 W. Broad St. in Scott’s Addition.

“The idea is to introduce our ciders … and generate interest for folks to come out and see us at the farm and see some of the more reserve ciders,” Eric Cioffi said. “The farm will remain what it is, which is home base.”

The cidery will occupy 1,700 square feet in the former Sea Dream Leather building facing West Broad Street, known for its mural of Bernie Sanders. The property is undergoing a $1.6 million renovation to be a space for creative professionals.

Eric Cioffi said the Scott’s Addition space will not have production equipment, and to make sure it’s able to produce enough cider, Courthouse Creek is adding two 20-barrel Foeders, which are large wooden fermentation barrels, to their cidery in Maidens.

“One big thing we’re being very careful about is maintaining the quality of (the cider),” he said. “Everything we do is in barrels.”

The downstairs area of the new Scott’s Addition space will have more of a bar feel with standing room and high-top, bistro-style seating. Eric Cioffi said the upstairs is planned to have more of a farm feel with communal tables.

The Highpoint is expected to be complete in November or December, and Eric Cioffi said he hopes Courthouse Creek will be pouring ciders there in January or February. Locally based 510 Architects is designing the building, with Hunnicutt Construction as general contractor. 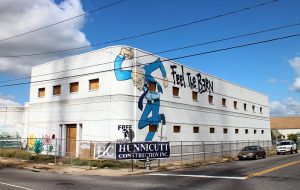 While Courthouse Creek’s Goochland facility wasn’t damaged in the March 31 fire, the business closed for a few weeks and reopened April 22.

Eric Cioffi said the fire came at an inconvenient time for the business, as it was preparing to expand distribution. It currently distributes to some local retailers including Growlers To Go, Total Wine, Once Upon A Vine and Uncle Russ’ Dockside Seafood Market in Williamsburg.

“Our first restaurant (we distributed to) was last month at Postbellum. Hopefully we’ll be able to revisit that and target that,” he said.

The Highpoint announcement coincides with good family news for the Cioffis, as well. They’ve been living temporarily in a rental home in Short Pump while awaiting permits for construction on their new home on the Goochland farm.

“I just found out our permit got pulled for the house as well,” Cioffi said, meaning they can move back home soon. “We’re all really excited to get back out at the farm.”

The Cioffis founded Courthouse Creek Cider in 2016 and opened the tasting room less than two weeks before the fire. The couple originally hails from central California and moved to Goochland in 2013, where they bought the property where their house, cidery and orchard sit.

Eric and Liza left their jobs as a lawyer and teacher, respectively, to chase the dream of starting their own farm. When the cost of doing so in California proved too high, the couple uprooted themselves and their four kids to head to Virginia.

Courthouse Creek snagged one of the final spaces in The Highpoint, which David Morrison, who owns the building with Robert Olson, said is completely filled.

Morrison said they’ve made rent at The Highpoint lower than market standards to allow tenants be self-sustaining. The development also will feature an 1,800-square-foot event space, outfitted with a commercial kitchen.