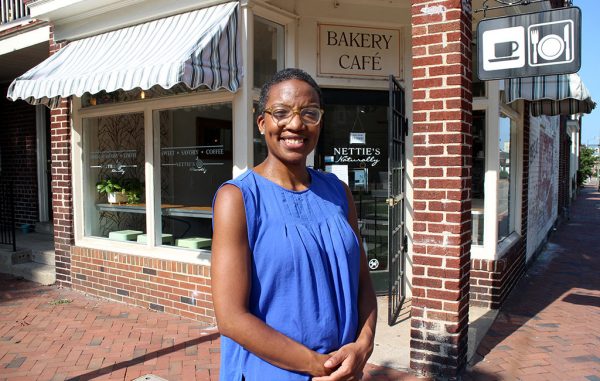 A downtown bakery space that was closed this summer when its owner was denied re-entry to the country is getting a second life from a familiar set of hands.

Shola Walker, the former assistant baker of shuttered Jackson Ward shop Nettie’s Naturally, is reopening the space at 100 W. Clay St. as her own bakery, Mahogany Sweets, with the blessing of her former boss, Nettie’s owner Lynette Potgieter.

Potgieter, a South African native who had been living and working in Richmond for six years, closed Nettie’s Naturally in August after she was denied a visa stamp to re-enter the U.S. while visiting her sister in Switzerland. She has since returned to South Africa, where she is now living with her parents.

A BizSense report about her situation drew inquiries from readers wanting to help, including a local congressman’s office and a senior city government official. A GoFundMe page was set up on her behalf – more than $3,000 from 48 donors had been raised as of Friday – and several readers offered to take over the business or help keep it going.

In the end, it was Potgieter’s second-in-command who emerged with an offer to take over the space, starting her own business while in essence continuing what Potgieter had started.

While Potgieter is retaining ownership of the Nettie’s Naturally name, which she intends to revive with a new business in South Africa, she agreed for Walker to take over her lease and start her own bakery with all of her old equipment that was left in the space.

Opening her bakery with her sisters Michelle Sanders and Shantell Malachi, Walker said she’d been thinking of starting her own business but didn’t think of doing so now until friends and family suggested she take over the Nettie’s space.

“At first, I was like, ‘I don’t know if I want to do that,’ because I was looking elsewhere, outside of Virginia,” Walker said. “Four or five of my friends asked me, ‘Why don’t you take over Nettie’s?’ So I texted Lynette and asked, ‘What do you think about this?’ She said she was actually really happy that I was considering it, because she really wanted to leave Nettie’s in good hands.

“Having that blessing from her, I thought maybe this is a good thing, a good transition,” she said. “I also thought it was a good way to honor her, having worked with her and our friendship.” 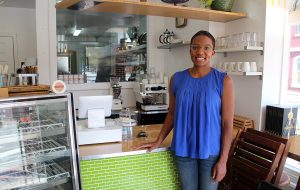 Walker plans to keep much of the interior space the same. Potgieter is allowing her equipment and furnishings to convey with the space. (Jonathan Spiers)

Potgieter said she’s happy that Walker will be continuing what she started in the Jackson Ward spot.

“Nettie’s Naturally has been my dream that I nurtured from scratch for five years, and it gives me peace in my heart knowing that Shola will be continuing in the space where Nettie’s Naturally came to life,” Potgieter said in an email.

“Shola is one of the most wonderful people I know. Her positive attitude and outlook on life, sense of humor and values, especially when it comes to honesty and integrity, far exceeds that of many people I have come to know,” she said. “I am happy and proud to call her my friend and wish her all the best with her new adventure. I know she will be a great success!”

Where Nettie’s Naturally specialized in gluten-free and vegan bakery items, Mahogany Sweets will do the same, Walker said, with several different recipes and more of a Southern flair.

Offerings will include a lemon chess pie, a mocha chocolate torte that she said is similar to Nettie’s, a coconut cream pie, and a ginger snap granola. There will even be an homage to her mentor: a cookie called “The Nettie.”

Having cleared her plan with Potgieter, Walker said she has assumed the remainder of her lease with the building’s landlord, Historic Manor, and last week she received her certificate of occupancy and a positive inspection report from the city.

She’s aiming to open the bakery for wholesale business early this month, with the storefront café and retail sales to follow in November or December. She and her sisters are putting their own capital into opening the bakery, which is Walker’s first business venture. She did not specify the amount of capital involved.

Walker will be leaving her job at Nota Bene, the Shockoe Bottom restaurant she returned to after fulfilling the last of Nettie’s wholesale orders and closing up shop in late August. Walker said she’s hoping to pick up some of Nettie’s previous wholesale business while also adding new clients.

Walker said the transition has been smooth thanks to Potgieter, who Walker said told the landlord to give her first dibs despite interest in the space from other parties. She also noted the kitchen equipment and café furnishings that Potgieter is allowing to convey with the space – a $30,000 investment when Potgieter opened the storefront in 2014. 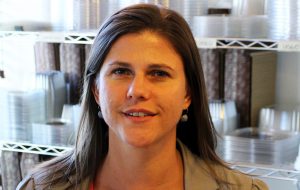 While the interior will remain largely the same, a Mahogany Sweets logo will replace the Nettie’s Naturally name on the storefront’s signage and windows. Walker is working with local firm Image 360 on those changes.

Walker said she wouldn’t have gone forward with her business in the Nettie’s space without Potgieter’s blessing, particularly in light of her former boss’s ordeal.

“One of the reasons I originally wasn’t sure if I wanted to use the space was because it really did leave a bad taste in my mouth,” Walker said of Potgieter’s visa stamp denial. “It felt like disrespect, honestly, because Lynette was abiding by all the rules, she had all her paperwork in order. So for her to not be allowed to come back into the United States, it didn’t make any sense, and it was heartbreaking.

“When I finally decided to ask her what her thoughts were on me taking over the space, it was really important to me to have her blessing, because I got a chance to see how hard she worked in that space,” Walker said. “If she said to me, ‘No, I would prefer you didn’t do it,’ I wouldn’t have done it, honestly – not only because she’s my friend, but also because she put a lot of work into that space and into her business.

“When she gave her blessing, it felt like, to me, this was a way I could honor our friendship and me having worked for her, because I’ve learned so much from her.”

For Potgieter, who has been waiting for her application for a green card to process, seeing Walker take over her space brings some closure to a chapter in her life she’s deciding to move on from.

“I am enjoying being back in South Africa. It’s an amazing place!” Potgieter wrote. “I am surrounded by my loving family, old friends and own culture, something money can’t buy.

“Since I had to close my business, there is nothing left in the U.S. for me anymore, and I’ll be continuing my dream in my home country,” she said. “I have brought a wealth of experience with me and am so grateful to everyone who contributed to my life in the U.S.”

Potgieter added she’s especially grateful to everyone who donated to the GoFundMe page, which was set up by Richmonder Liz Fishman.

“I could not have survived my ordeal without it,” she said.

You wrote, “Mahogany Sweets will do the same,…with several different recipes and more of a Southern flare.”
I believe the correct word would be “flair”.
Thank you for the

(Continued)
Thank you for the positive and upbeat article.

‘I am enjoying being back in South Africa. It’s an amazing place!” Potgieter wrote. “I am surrounded by my loving family, old friends and own culture, something money can’t buy.

‘Since I had to close my business, there is nothing left in the U.S. for me anymore, and I’ll be continuing my dream in my home country,” she said. “I have brought a wealth of experience with me and am so grateful to everyone who contributed to my life in the U.S.’