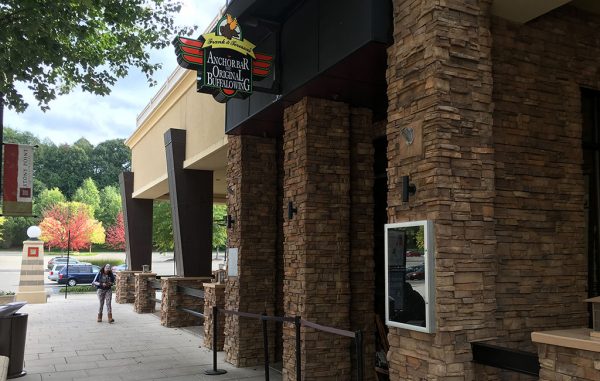 A New York-based restaurant’s Richmond outpost has been shuttered after less than a year in business.

Employees standing outside the establishment Monday afternoon, who wished not to be identified, confirmed the restaurant’s closure.

Calls and an email to David Allred, the restaurant’s franchisee, were not returned by press time Monday afternoon.

The entryway to the restaurant was cordoned off on Monday and many of the patio tables had not been placed outside, despite scheduled dinner service in a few hours.

A new-to-market concept, Anchor Bar was brought to Richmond by Allred, a local IT veteran who opened it in February after taking over the 8,500-square-foot space left vacant since 2014 by Champps Americana.

Allred said prior to opening that he’d likely use the Stony Point location as a testing ground for additional Virginia franchises.

Anchor Bar operates five locations in New York and two spots in Canada, according to its website. The Stony Point spot was its first in Virginia.

The restaurant’s claim to fame, according to its website, is that co-founder Teressa Bellissimo in 1964 created the now-ubiquitous sauce that gave rise to the term Buffalo wings.

I wish something would be done to get Stony Point back on track. It’s just a shame. When I moved her 7 years ago it was the “in” spot and ALWAYS busy.

Day 1 of Marketing class you are taught “Location, Location, Location”. This place could have done well if more due diligence had been put into selecting a location that would provide a sports bar demographic.
Choosing a struggling shopping mall physically disconnected from population centers did not seem like a recipe for success.

This was rumored to be the first foray into franchising the concept. One might conclude that the local owners had little to no restaurant experience.

Overpriced food.
No advertising/marketing.
Everything else the other commenters said.

Tis a shame. For better or worse, the dining public has raised the bar of expectations higher than previous years.

I went a few times – best thing on the menu was the roast beef on weck (not the wings).

I agree with the comments of being “physically disconnected) from population centers – we moved into the old neighborhood behind the mall – close enough I could walk there (1/4 mile) – but there is no neighborhood access. Instead, I drive over 3 miles (out to Huguenot and then Chippenham) to get there – as far away as Collegiate is…

So if they built a bike path or foot bridge would that help?

That place never had a chance. You could tell it was not going to make it when you walked in, it just always seemed empty. They gave up early during the decoration phase. That chain might have created the wings but too many other places have them now for that to be a draw. If it were up to me, I’d take one of the (empty) smaller shops in the heart of the mall and turn it into a small cozy pub place. I’d also want to get a business that drew some traffic in on a regular basis. To… Read more »

[…] is underway for a new H&M store, but other spaces in the mall are vacant, including the recently shuttered Anchor Bar […]

I moved here from Buffalo last year, even we don’t go to that restaurant. They invented the Buffalo wing, but there are wayyyyy better places to get them in Buffalo.

They didn’t know what they wanted to be. It’s convenient to our home, so we went there several times. Wings were great, but rest of menu was limited. They wanted to attract a sports crowd, but wouldn’t invest in the MLB, NBA, NFL, and NHL packages that would allow them to show out of market games. It just struck me as a poorly run place. They went halfway, and half way never works. Too bad.