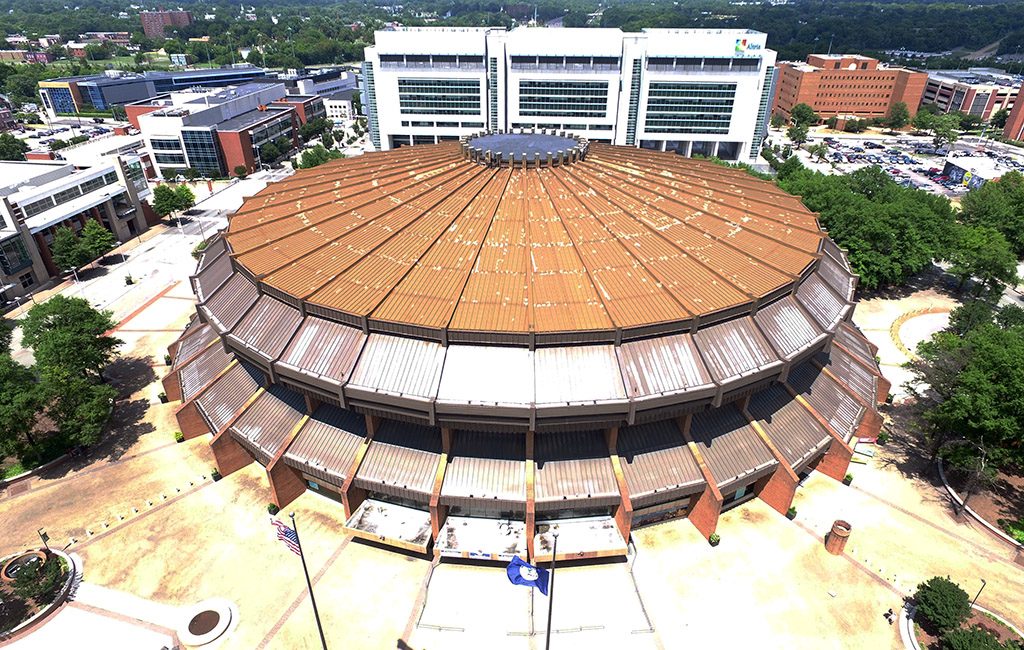 A group of influential local businessmen may have some competition in their quest to build a new downtown arena to replace the aging Richmond Coliseum.

Mayor Levar Stoney on Thursday announced the city has issued a request for proposals for an arena-anchored development that would look to revitalize about 20 acres of the city bounded by North Fifth Street, East Leigh Street, North 10th Street and East Marshall Street.

Dubbed the North of Broad/Downtown Neighborhood Redevelopment Project, respondents now have 90 days to pitch proposals for the 10-block area that should include a new 17,500-seat arena, a new hotel with at least 400 rooms to serve the convention center, preservation and reuse of the old Blues Armory building, mixed-income housing and reuse of sites occupied by outdated city buildings.

Also on the city’s wish list is a new 65,000-square-foot transfer station for GRTC to be built in the vicinity.

“We are setting a high bar for our respondents,” Stoney said during a press conference at City Hall.

The area in play encompasses 20 properties, 15 of which are owned by the city or an affiliated entity. The largest of those parcels is the 7 acres upon which the Coliseum stands.

The city’s wish list in the RFP is similar to previously reported plans that have been mulled by a group of private investors, including Dominion Energy CEO Tom Farrell, Altria CEO Marty Barington and C.T. Hill, retired head of SunTrust’s Mid-Atlantic operations.

Plans discussed by the investor group include building the new arena where the Richmond Coliseum currently stands at 601 E. Leigh St. with 17,000 to 18,000 seats.

The group’s plans also would call for tearing down what’s left of the old Sixth Street Marketplace and transforming the adjacent Blues Armory into a multi-level food and entertainment complex with a market on the first floor, music venue on the second floor and top-floor event space.

A new hotel would be built on land behind the Blues Armory and next to the Coliseum. 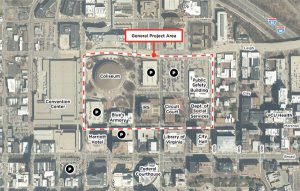 Map of the 10 blocks slated for redevelopment.

The Farrell-led group has not formally submitted plans to the city, but has retained Fairfax-based Concord Eastridge and CEO Susan Eastridge, along with Michael Hallmark and his Los Angeles-based Future Cities, as master developers of the massive project.

In response to the city’s announcement, Jeff Kelley, a spokesman for Farrell’s group, said, “Mayor Stoney has laid out a bold vision for downtown Richmond.

“We look forward to reviewing the RFP and to a competitive process that moves the city forward,” Kelley said.

Asked about the group’s plans, Stoney said, “I’m well aware of their ideas, but this is a City of Richmond project.”

Stoney and the 30-page RFP said any proposals would not be funded with direct city debt and an emphasis must be placed on job creation for local residents and the use of minority-owned businesses in the development process.

“All of Richmond must benefit from this development, not only after it’s completed, but while it’s being built,” Stoney said Thursday.

The proposals must include financing that would not increase the city’s debt load, but that can potentially take advantage of tax-increment financing, which allows for new tax revenue generated by the project to be put back into the development.

Plans for the new arena must include either demolition and replacement or rehabilitation of the existing Coliseum. Respondents also must have a plan for the Coliseum’s existing $2.9 million debt load.

The city also wants to see when current operations at the coliseum would end to make way for a new arena onsite, when the new venue would open and who is proposed to have naming rights.

Farrell’s group potentially would look to have Dominion as the naming sponsor for the facility.

RFP responses are due Feb. 9, 2018. The city would then evaluate the pitches, with a goal of selecting preferred plans and beginning preliminary negotiations in March and April.

Full contract negotiation would then look to be completed and sent to City Council for approval by Sept. 30.

Respondents must include a $50,000 submission fee, which will be held by the city until pitches are selected and contract negotiations begin. The deposits of those who aren’t chosen would be returned.

Lee Downey, director of the city’s department of economic and community development, said Thursday that other groups besides Farrell’s have Richmond on their radar.

“This is an interesting site for many people,” Downey said of the 10-block area. “We’re looking for the market to be creative.”

The prospect for a new arena in Richmond may have received a jolt this week when news outlets in Hampton Roads reported that Virginia Beach city council voted to end its contract with a developer that had planned to build a $220 million, 18,000-seat arena at the oceanfront after the group missed a financing deadline. The matter appears to still be up for debate, according to the Virginian-Pilot.

The new tax bill before Congress proposes to end tax free bond financing of sports venues. I wonder how this will affect this initiative if it’s passed to include that clause. Note as well that the area encompasses the Courts building and the police HQ. they’ll have to be replaced prior to this redevelopment. That’s big money for the City. There are a lot of hurdles pending. I hope our city staff has properly vetted this proposal to a number of developers.

Police Headquarters is on Grace Street and all the Courts moved out. The 501 N 9th Street building (old Public Safety building) is 90% empty and houses cold/hot weather shelter, some drug testing probation/pre-trial service areas, and I think they still use the hold cells for Court on G level. Level A and B are abandoned except for maybe some storage. Most of G is closed off and the 2nd floor is vacant (the roof leaks). It should have been plowed under in the 1990s. The City is NO authority over the Courts building at 400 N 9th Street. The… Read more »

Sadly, it looks like a bigger version of the Broad Street CDA, which ended with taxpayer bailout. It also looks like Mayor Stoney is breaking his campaign promise to put schools first.

Ingress-egress into that area isn’t enticing. No mention of parking for 17,500 seats.
Move the project to the Diamond where the city already owns 60 acres. VCU/MCV could take the Coliseum area and put it to better use.

Too many one-off ‘visions’ for specific areas of the City. How about a city/region-wide master plan? Perhaps even something to better utilize our greatest asset, the James River? Seriously, how much has the city spent developing and reviewing proposals for The Bottom and The Diamond areas?

Regional Master Plan, especially for regional facilities, is a great idea. Of course considering the last City of Richmond Master Plan was done in 1999 and the update is still dragging along with no meetings or firm timeline I don’t think it will gain much traction.

Funny Congress moves to end the ban of tax-exempt stadium development area bonds (OMG they have a good idea that benefits citizens) that almost always screw the taxpayer and this administration wants to jump on the bandwagon of this sinking ship. Can’t wait to see the details of the RFP.

Congress is not ending the ban of tax-exempt bond financing for stadium construction use. Its ending the practice of it.

[…] earlier this week, Mayor Levar Stoney announced the city has issued a request for proposals to redevelop the Coliseum and roughly 20 acres surrounding […]