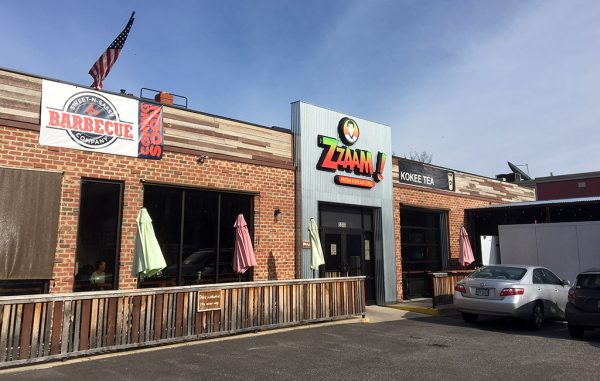 Zzaam’s Carytown location will be converted into a food court. (Michael Schwartz)

Derek Cha is at it again.

The founder of the Sweet Frog frozen yogurt chain is revamping the Carytown location of his other food business, Zzaam Fresh Korean Grill, to open the neighborhood’s first food court.

The project will convert Zzaam’s building at 3300 W. Cary St. to allow it to share the property with a barbecue joint, bubble tea concept, self-serve bar and itinerant oyster bar.

Dubbed the Zzaam Food Court, it will be among the first iterations in Richmond of the food court trend, which has popped up in larger cities around the country, and brings multiple independent restaurants under one roof.

“I’ve noticed similar concepts in New York and Washington, D.C., and decided it was time to introduce it to Richmond,” Cha said. “Carytown, given the number of restaurants and attractions in the area, seemed to be a perfect fit for this type of concept.”

Since deciding on the concept this summer, Cha said, he has invested nearly $500,000 to renovate the space for new tenants. Construction is underway.

Richmond-based Voorhees Design Inc. is the architect for the space and Romero Sanchez is the general contractor.

Zzaam will be joined in the food court by two new-to-market brands: Sweet N Sassy Barbecue Co., which has one location in Fredericksburg, and Kokee Tea, which serves bubble tea and fruit smoothies and has five locations around Virginia and Maryland.

Both are set to open their kitchens in the next two to three weeks, Cha said.

Tangier Island Oyster Co., which grows oysters in the Chesapeake Bay off its namesake island and is run in part by several Richmonders, also will have space in the food court on a few days throughout the year, Cha said.

“I know the guys at Tangier Island Oyster Co., and when I was developing this concept for Richmond, I wanted them to be a part of it,” he said. “I told them to bring the oysters and I’ll provide the space.”

Cha also has been busy developing a new concept of his own for the food court.

He’ll open RVA Draft, a bar that will offer 50 beers, wines and ciders from self-serving taps.

The serial entrepreneur first launched Sweet Frog in 2009 – eventually growing it to more than 300 locations worldwide before selling to Boxwood Capital Partners in 2015.

In 2014, Cha launched Zzaam Fresh Korean Grill as a food truck concept before growing the brand into brick-and-mortar sites.

Zzaam operates six locations across the U.S., including in Colonial Heights, Midlothian and Carytown. It also has restaurants in Charlottesville, Connecticut and California.

With the tenants in place, Cha said he is focused on making the food court a destination.

“Food is one thing, but you want people to have something more to do,” he said. “There needs to be a fun factor.”

To encourage families and group gatherings, Cha plans to cordon off Zzaam’s nearly 15,000-square-foot parking lot and line it with picnic tables, fire pits and games, including oversized Jenga and a foosball arena.

“Since it’s getting colder outside, people can roast marshmallows at the fire pits, or drink a beer or have some wine with the friends or family,” Cha said. “We just want people to stay and have a good time.”

Cha said he would like to bring other popular food concepts to Zzaam Food Court, including more food trucks, donut carts and pizza ovens.