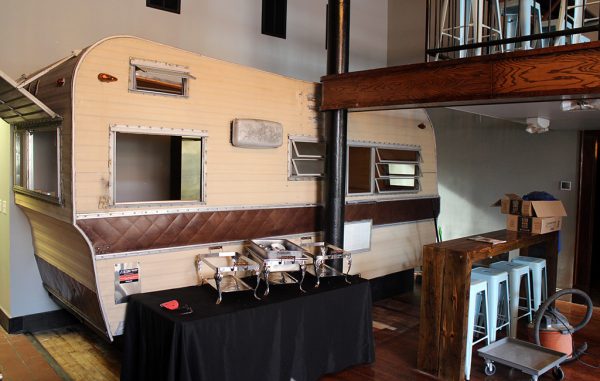 A modified food truck spliced into the brewpub’s back wall. (Mike Platania)

Just in time for a respite from Black Friday shopping, Shockoe Bottom’s newest watering hole is open for business.

The three-barrel brewpub will have three new beers on tap, including a blonde ale and honey red ale, and also will serve beers from Lickinghole’s main brewery at 4100 Knolls Point Drive in Goochland.

The 6,000-square-foot space includes an upstairs loft and can seat roughly 100. A modified food truck is built into the back wall, with a full kitchen behind it.

Lickinghole Goodwater will be open on weekends through the new year while it awaits a full ABC license. Once granted, Stockton said, it likely will be open Tuesday through Sunday.

“The plan is to eventually be a brunch spot,” Stockton said. “No one in town really does breakfast beers – radlers, breakfast stouts, mimosa-type beers.” 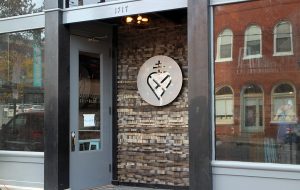 Earlier in 2017, co-owner and CEO Lisa Pumphrey and Stockton met Marley’s half-brother Richard Booker while visiting Jamaica and brought him on board to help develop food and beer recipes for Goodwater.

Lickinghole Goodwater is a block away from the 17th Street Farmers’ Market, which is undergoing a major redevelopment scheduled to be complete in spring 2018.

The opening comes six months after Lickinghole announced a $14 million expansion, the plans of which originally included upgrades to its Goochland location and opening a taproom in Lynchburg.

In August, the company changed course and opted to open the taproom in Shockoe Bottom instead of Lynchburg. It still is planning the expansion at its Goochland home base.

Loved visiting the main brewery in Goochland. Very pretty views and good atmosphere with the live music and mountains in the backdrop. Excited to visit this new location closer to home!