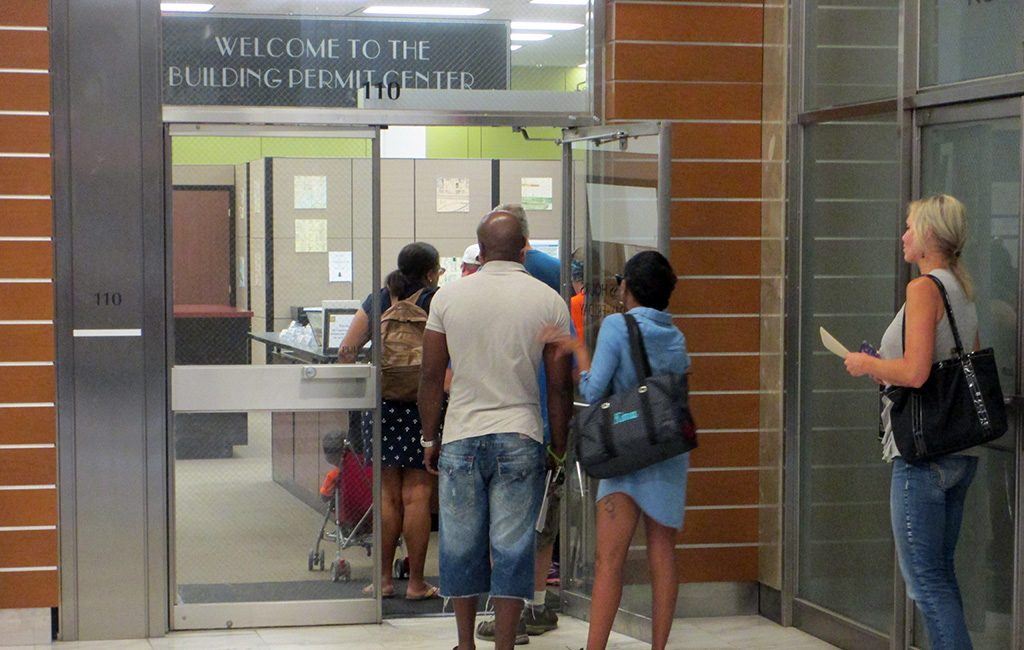 Lines out the door are common outside the city permitting center. (Jonathan Spiers)

Responding to complaints from developers that the city’s review process has been slowing down their projects, Richmond Mayor Levar Stoney has announced changes aimed at improving operations in the city’s inspections and permitting office.

In a letter to developers and other stakeholders Nov. 28, Stoney lists four changes underway at City Hall aimed at improving interactions with customers doing business in Room 110, the building inspections and permitting bureau.

They include adjusted hours – 7:30 a.m. to 4 p.m. – to open and close the bureau permit center an hour earlier in accordance with peak demand times, physical improvements to Room 110 to facilitate customer flow and ensure a “one-stop shop” experience, emailed permits to reduce wait times, and validated parking for bureau customers in the city’s parking deck at Seventh and Marshall streets.

The changes come in response to complaints from local developers who have said the city’s process for reviewing required permits and conducting inspections has caused their projects to fall behind schedule – a trend that some said, in a BizSense report in August, has gotten worse as development activity has increased in the city.

In an interview in August, Stoney noted several efforts the city was undertaking to address those complaints, including meetings with officials from neighboring Henrico County about that jurisdiction’s processes for permitting and inspections. Meetings with developers and stakeholders have continued since, helping to shape the recommendations announced in Stoney’s letter.

“We heard a lot from people related to their experiences applying for and receiving permits from Room 110,” the letter states. “To that end, I am pleased to present a series of steps that the City is implementing as of December 1, 2017, to improve customer interaction with permitting in the City…”

Mark Olinger, director of the city’s planning and development review department, which includes the building inspections and permitting bureau, said the changes are aimed at improving customer experience after an effort a decade ago to make the office more of a one-stop shop. Since then, he said increased demand for permits and inspections has resulted in longer wait times – and longer lines often visible spilling out into the City Hall lobby.

“I’ve always felt that we needed better space,” Olinger said Wednesday, “so the mayor has committed to helping us make improvements to 110, to provide some separation between people waiting and people working, to make it feel a little more welcoming, a little more up-to-date.

“I think it’s more important than that, because as we continue to move forward with things like fewer paper plans and online applications, we’re going to have computers where people can upload their plans without bringing in paper,” Olinger said.

The changes are being welcomed in the development community, from both developers and groups such as the Home Building Association of Richmond. Mercer May, who has been involved in the discussions as the association’s government affairs director, lauded the moves in a written statement.

“The Home Building Association of Richmond, and in particular the Multifamily Council, is excited to see the Mayor and his team taking progressive, positive steps towards making the functions of this Department more effective, efficient, and customer-friendly,” Mercer said.

“For too long the Department has been neglected even though their work is crucial to sustaining the economic renaissance happening inside Richmond. Multifamily developers, single-family home builders, and Richmond citizens renovating their homes would all benefit immensely from upgraded processes and services. The functionality of this Department undoubtedly has a direct correlation to Richmond’s economic growth, so the better it operates, the better it is for our entire community.”

Developer Jeremy Connell, who was among those who shared their concerns with BizSense in August, likewise welcomed the announcement. 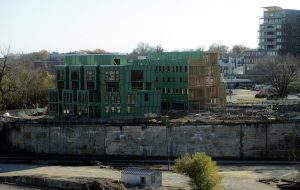 The 7west condo project in Manchester is going vertical after months of delays. (Jonathan Spiers)

“It’s a start,” Connell said. “It’s a step in the right direction, everything helps, and I’m glad to see them make the changes.”

Other developers BizSense spoke with said they have seen improvements in the city’s response times since August, while others maintained that little has changed. Connell, whose 7west condo project in Manchester is going vertical after months of delays he attributed to permitting, said he couldn’t comment on any changes since the project has progressed beyond that stage.

The city’s response to the issue has included a pair of meetings held in August with Henrico officials. One of those meetings involved a tour of Henrico’s Permit Center, which Deputy County Manager Randy Silber said was established years ago to be a one-stop shop that could turn around smaller requests within an hour.

Other changes were made in 2015, when Silber said Henrico faced similar complaints from developers that resulted in shortened and streamlined review processes, a fast-track process for large economic development projects, and twice-yearly meetings with developers.

“Henrico County also has been criticized over the years with regard to our processes,” Silber said. “The development community felt that we weren’t as quick as we should be, so we took a hard look at that and made some changes to our processes back in September of 2015.”

Silber said the county was happy to have the meetings with the city, which he said resulted from discussions between Stoney and County Manager John Vithoulkas. Olinger, who was among the city officials who took part in the meetings, said they laid some of the groundwork that resulted in the mayor’s recommendations, though he said they also made clear a difference in staff levels.

“One of the big takeaways is they have more people than we do,” Olinger said. “So what we need to try and figure out is how we work smarter, because I’m not sure we’ll ever get to the level of employment that they have.”

Olinger’s comment echoed those shared by Stoney in August, when the mayor told BizSense he wished the city had the same staffing numbers dedicated to permitting and inspections as Henrico. Silber said such comparisons are not easy to make.

“It’s a difficult thing to compare apples to apples when you’re looking at Henrico County vs. the city or anybody else, because we all have different ways of handling our processes and counting those numbers,” Silber said.

While the city has seen an increase in development activity in recent years, Silber said demand is similarly upwards in Henrico, which he said faces its own challenges with staffing.

“I would think that we’re probably tracking something similar to what the city is seeing as far as active development occurring,” he said. “That creates challenges in trying to staff up to handle that, because you want to be able to have the right resources to provide the reviews and approvals, and yet you have to be sensitive to not over-staffing, because these things run in cycles.”

Olinger said the city continues to work on rolling out its new EnerGov Citizen Self Service system, which he said requires training but will improve response times with quicker sharing of digital documents rather than paper files. He said his department is also expecting to fill several vacant bureau positions by the end of the year, including two engineer positions, a zoning officer and more permit inspectors.

While he expects those hires to help with improving operations, Olinger said maintaining staff will continue to be a challenge.

“My take has always been: as we get fully staffed, we do well, then somebody accepts another position somewhere else and I’m back to having to fill positions,” Olinger said. “I’m hoping at the end of this year or early part of next year we’ll have a full complement of staff, and if we can keep everybody intact, I think things will be much better.”

The four changes that take effect Friday include:

» Earlier office hours for the permit center, 7:30 a.m. to 4 p.m., moved up an hour to better meet peak traffic times and to allow bureau staff time to conduct other office business. The mayor’s letter said traffic after 4 p.m. has been light. Staffing hours are unchanged.

» Renovations to Room 110 to improve customer flow and reduce wait times, which the mayor said averaged about an hour earlier this year and now average about 30 minutes.

» Emailed permits as soon as plans are approved. Customers are encouraged to send permit documentation to staff via email.

» One- and two-hour validated parking for Room 110 customers at the city parking deck at Seventh and Marshall streets, aimed to reduce parking challenges around City Hall.

An effective on-line system will be the true revelation for both permit seekers and city staff. Hopefully, Energov will be the answer and not a roadblock.

The Multifamily Council of HBAR was initiated four years ago to work hand in hand with the City staff to improve the processes. Mayor Stoney appears to be fully on-board with making it work. These changes appear to be progress.

I had a great front-end experience based on the changes instituted, but I am still waiting for my permit application to be reviewed after 6 weeks. I am supporting two mortgages, and I’m getting ready to loose my place on the contractor’s schedule while I wait for the understaffed permits office to review my permit. While I haven’t wanted to be pesky, I have also not received any responses to my inquiries. In the last two weeks, I have called the general office, and the reviewer with whom I originally spoke prior to submitting my permit application, and I have… Read more »