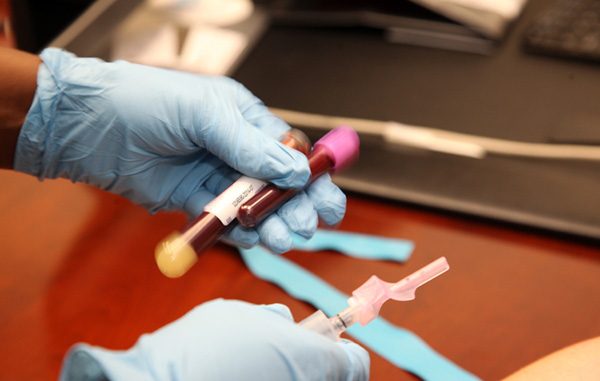 Iggbo launched in 2015 with an Uber-like business model to simplify the blood-drawing process. (Iggbo)

A local startup that has built a reputation as the “Uber of blood draws” is expanding its offerings and taking a cue from another well-known tech company.

Iggbo, which launched in 2015 with a system that dispatches phlebotomists to patients’ homes to draw blood, announced last week that it’s offering access to other healthcare services and building a network of brick-and-mortar locations using excess space in doctor’s offices, which can be found and booked through the company’s online app.

“It’s much like what Airbnb has done to the hospitality industry,” COO Blake Wehman said. “Many labs have dormant or un-leveraged space.”

When a doctor orders a blood sample or other service but is unable to perform it at its location, Wehman said, they can connect with a patient through Iggbo to find a nearby office with an unused exam room and available workers and schedule a meeting.

Both patients and doctors can use Iggbo’s online search to find a lab that can provide the service needed. It also provides real-time updates on appointments.

The company isn’t subleasing space within each brick-and-mortar location – it collects a flat fee on services brought to each care location via Iggbo. The office gets paid by the provider that ordered the service.

“It’s their branding and franchise,” Wehman said of the medical offices providing space. “They’re running business as usual, they just now have revenue from people we drive to them from our site.”

Spicer said providers set the price for services and choose which other providers see the appointment opportunity.

Iggbo also is pivoting beyond its original niche as a blood-testing intermediary.

“From a patient perspective, I can have a more readily available network of places to get my blood drawn. If I’m a lab that wants more blood back, I have access to more locations to get it from. And if I’m a medical facility, I can make more revenue for the labor I already have that’s being underutilized,” Wehman said.

Since its launch two years ago, Iggbo has raised $16 million in capital and been operational in 1,300 cities.