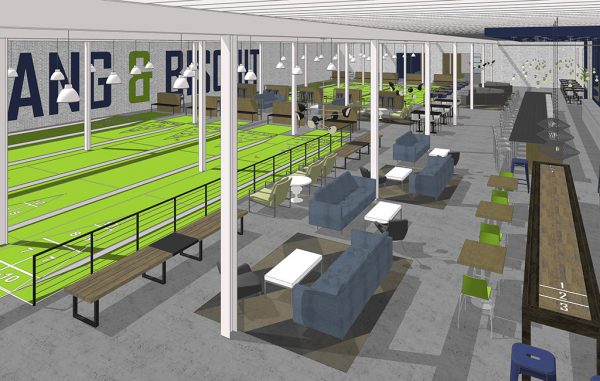 A pair of payroll executives, a commercial real estate broker and a construction company head walked into an old Scott’s Addition warehouse – and a shuffleboard bar was born.

David Gallagher, co-founder and CEO of Richmond-based Dominion Payroll, along with a group of investors, are planning Tang & Biscuit Shuffleboard Club at 3406 W. Moore St.

The group, which consists of Gallagher’s fellow founder David Fratkin, Colliers International broker Clint Greene, and Henry Shield of Commonwealth Construction Management, will build the new venue in an 18,000-square-foot building they acquired last month for $1.7 million, according to city property records.

They’re poised to invest up to $2 million to overhaul the former warehouse into Tang & Biscuit and they’ve tapped Steve Nardo, former CEO of concierge medical practice PartnerMD, as the general manager.

Shuffleboard is a game where players use cues (tangs) to push weighted discs (biscuits) that glide down toward a target on a narrow court.

Gallagher admitted that images of retirees working a tang to get their biscuit on the board came to mind when he thought about shuffleboard, but that image was dashed last summer after he visited a Brooklyn, New York club where shuffleboard was the main attraction.

“You had the young and the old playing together, interacting with each other,” Gallagher said. “I kept thinking to myself, ‘Wow, this would be great in Richmond.’”

He wasted no time assembling a group of investors to purchase the warehouse and put in motion a plan to bring the entertainment complex to the area’s most sought-after commercial neighborhood. 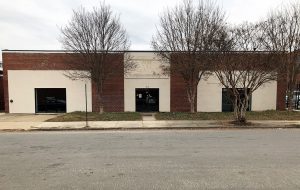 Greene’s Commonwealth Construction Management is handling the building renovations. Richmond-based 510 Architects, based in the nearby HandCraft building, has been tapped as Tang & Biscuit’s architect.

Plans call for the facility to include 10 floor shuffleboard courts and six shuffleboard tables, Gallagher said. The venue also will include 4,000 square feet of rental space for corporate events and private parties.

“There will be other things, too, that we plan to offer there besides shuffleboard,” Gallagher said. “We’ll have ring toss and multiple board and card games as well.

“Scott’s Addition was the perfect place because it’s a neighborhood that bridges so many people together,” he said.

While the main attraction will be shuffleboard, the group is working on a fast-casual food and beverage concept for the venue that includes pizza, sandwiches and a 50-foot bar offering beers and cocktails from local booze makers.

The addition of Tang & Biscuit further solidifies Scott’s Addition as the area’s next entertainment spot.

Work is ongoing on River City Roll, a 22,000-square-foot, high-end bowling alley going up at 939 Myers St. The venue is on track to open in during the first quarter 2018.

Another bar-arcade is in the works from Comfort and Pasture co-owners Jason Alley and Michele Jones, along with Saison owner Jay Bayer, at the former bingo hall at 2900 W. Broad St. The venture, which will combine a bar, arcade, restaurant and brewery under one roof, will be called Bingo.

What I like about the shuffleboard element is that anyone of any age group can play and enjoy the competition. You don’t have to be “good” or athletic to have fun. This will have as much appeal to us boomers as it will to the millenials. It’s a great idea.

Interesting to see how the numbers work out for all these places. Looking a lot like bubble businesses. Remember the ICE bar? it would also be nice to know what is happening with Bingo place. Not a permit applied for so I doubt that as the article said “they’ll plan to open during the fourth quarter 2017, or early 2018.”

Michael;
I don’t know that Scott’s Addition ifs filled with bubble businesses.
I think that there is a top limit to craft beers and breweries, but we are no where near that point yet.
Also, peoples tastes have changed.
All the young people lining up for limited edition beer releases now will not always have the time to do that, but they are also going back to PBR.