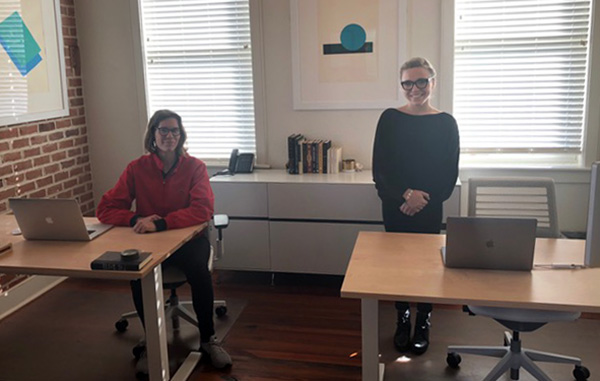 Born out of family ties to the insurance business, a new local startup is looking to tap into the so-called “gig economy.”

Hannah and Jade Sullivan last month went live with Pogo, an online platform based in Church Hill that offers commercial insurance policies for freelancers, consultants and others who are self-employed.

Through its website and brokers, the five-person company aggregates available business insurance policies for users, akin to Kayak.com for flights and travel.

“The insurance people are these experts that speak in definitions,” Hannah Sullivan said. “We’re kind of the middle man. We reach out to carriers for you and sift through the info for you.”

After graduating from the VCU Brandcenter in 2014 and stints in the New York City ad business, the married couple began working on a back-end tool for insurance agents through Hannah’s father, Steve Love, an insurance industry veteran.

As that idea percolated, they began talking to self-employed friends about insurance needs.

“They just had a laundry list of how annoying it was, saying how they have different policies from different companies,” Hannah said. “That’s where the idea came from – we can help people like our friends, so we tried.”

The Sullivans kept costs down in launching the company by designing and building the website themselves, which they said was one of the most time-consuming parts of getting Pogo off the ground.

“It was excruciating, honestly,” Hannah said. “Getting the verbiage right alone was tough … We spent months working on user experience before we did anything else.”

Pogo’s online form asks users what they do for a living, what types of insurance they’re looking for, where they’re located and more. The site then offers policies such as general liability, business auto, workers comp and inland marine.

“You fill out one quote, and then our agents work with our carriers. They do all the dirty work,” Hannah said.

Pogo is free for customers, and earns its money by taking a portion of each sale. The duo said their target market is independent contractors and consultants.

“The entire workforce is changing,” Hannah said. “If people are not going the self-employed route and they want to, it’s because, ‘Oh my god benefits.’ They’re a huge part.”

The challenges facing Pogo lie mostly in getting insurers and customers to use the site.

“Insurance companies aren’t the fastest-moving people on earth. It’s a matter of talking to them and convincing them to take a risk and do this tech idea,” Jade said.

And the customers often have their own reservations.

As for the future, Jade said they’re most concerned about continuing to build Pogo’s technology and market it. Hannah added they plan to develop profession-specific packages. The pair sees small- and medium-sized business as a market going forward.

“We serve entrepreneurs and small businesses,” Jade said. “We’re focusing on the self-employed to start because we feel like they’re underserved.”

While there are other companies aggregating insurance, the Sullivans said, most aren’t focusing on business insurance.

Another locally based startup in the industry is Compare.com, which focuses on auto insurance, and also offers insurance on small business, home, health and other policies.

Hi Aldo! The link is pogo.co 🙂