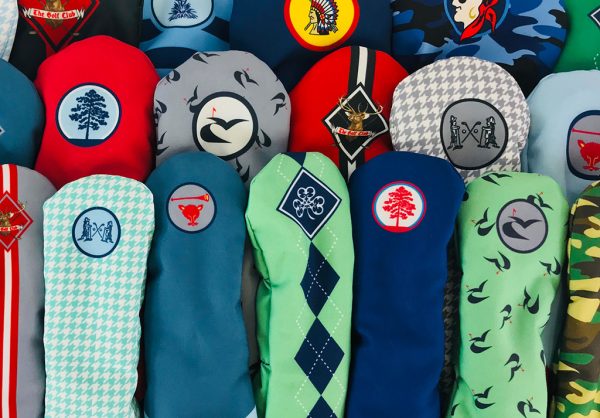 A local company known for making belts for golfers has turned its attention to dressing up the clubs in their bags.

J.T. Spencer is adding golf club head covers to its line of products. The company, headquartered at 7921 W. Broad St., specializes in golf belts and is a licensed producer for clothing retailer Peter Millar.

Owner Steve DeWalle said he thought of adding to J.T. Spencer’s product line last spring, but the peak season arrived and forced the idea to the back-burner.

“Fast-forward six months ahead and we had a staff member who needed a project to do one morning, so we asked her to try to stitch one up,” DeWalle said of the head covers. 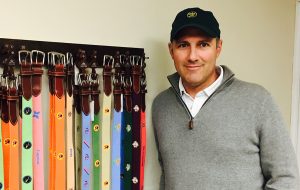 Steve Dewalle with a selection of JT Spencer belts.

After landing on a final design, DeWalle brought samples of the head covers to the PGA Merchandise Show in Orlando, a multi-day trade show where golf companies debut new gear.

“We took it down there and didn’t plan to show, but we did and it was a big hit,” he said.

The covers, which typically protect the heads of drivers and wood clubs, will be made in-house at J.T. Spencer’s headquarters.

“We created a new style that I don’t think anyone else is doing,” DeWalle said. “Recently, knit ones and leather ones have come into popularity. We’re making ours with a lightweight canvas that we custom-make and then dye.”

The new head covers retail for $48 and will be posted on J.T. Spencer’s website in coming days. DeWalle said custom head covers are already being produced and sold for Peter Millar.

J.T. Spencer produces custom belts for the likes of Kinloch Golf Club and Country Club of Virginia. The belts are sold under the Peter Millar brand.

“It’s nice being partners with Peter Millar because they have a massive distribution network. If we come up with a new product that their execs like and we roll it out, we have 14 sales reps in the U.S. and another 12 in the U.K. and Europe,” he said.

J.T. Spencer sold about 60,000 belts in 2017 and has products in 800 shops. The company has nine employees, and DeWalle said they’ll likely add about four more over the course of this year.

There will soon be two new venues at which to put golf belts to use locally, as driving range competitors Drive Shack and Topgolf are both racing to open facilities here.

Drive Shack has begun work on a $25 million range in Goochland, while Topgolf recently received approval from Henrico County to build a location just west of Scott’s Addition.