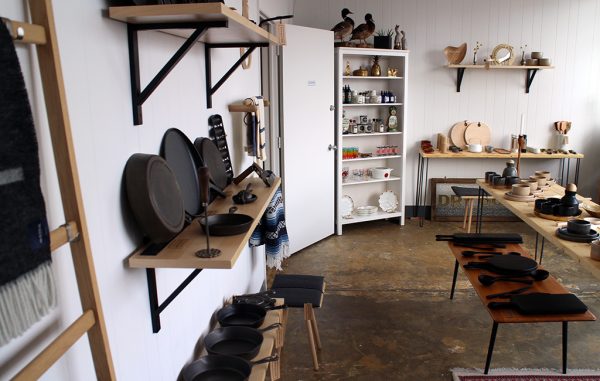 A seasoned chef has settled into Scott’s Addition to open the neighborhood’s latest retail shop.

The shop was founded by Bobby Bland, formerly head chef at restaurants stretching from Raleigh, North Carolina, to France, New Zealand and Spain.

In 2011 he moved back to Richmond, and while working at Ram Tool Construction Supply Co. in sales, he began finding and restoring vintage cookware as a hobby.

“It was all stuff I was finding and restoring, a lot of cast iron,” Bland said. “It was becoming a collection and I was like, ‘Oh my god, I’m becoming a hoarder,’” he joked.

He then began selling to friends and at various events in Richmond and along the East Coast, leading to a shop of his own.

“I knew I wanted to do a brick-and-mortar,” he said. “All of the sudden this place jumped into the market and I just jumped on it.”

Bland’s shop is the latest retailer this month to move into the Sound of Music building. Orange, an art and home decor store, reopened in recent weeks after relocating from Carytown.

Much of Accoutre’s inventory is from smaller manufacturers from the U.S., Scandinavia, Japan and Italy and can’t be found in other shops around the state. It carries brands like Black Creek Mercantile and Skagerak, which hail from Kingston, New York, and Denmark, respectively.

Bland said a smaller shop grants him access to smaller brands that hand-make goods and can’t produce enough to sell to larger chains like Williams-Sonoma or Sur La Table.

“(These companies) play ball with smaller guys as it is … Skagerak was real keen on getting in because they have a lot of representation in other parts of the U.S. but not really over here on the East Coast,” he said.

The name comes from the French word accoutrement, meaning accessory, or “to outfit.”

Elsewhere in the Scott’s Addition retail scene, Richmond Bicycle Studio closed at the end of January at 1717 Summit Ave.