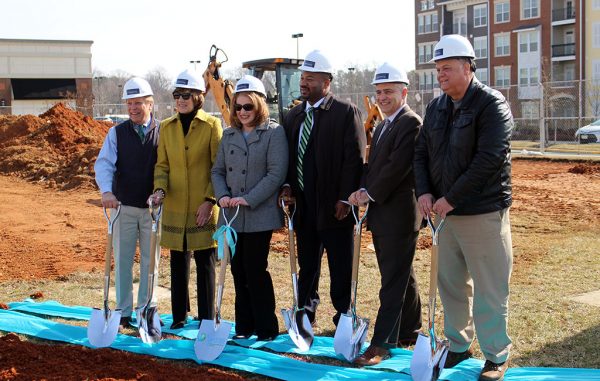 Another new user is set to rise at the former Cloverleaf Mall site.

Spectrum Transformation Group, a clinic serving people with autism and other developmental, behavioral and mental disorders, broke ground last week on a facility in the Stonebridge development near the intersection of Midlothian Turnpike and Chippenham Parkway.

The new 7,200-square-foot location will replace Spectrum’s current Chesterfield digs near the intersection of Courthouse Road and Midlothian Turnpike.

“We’ll have a lot more treatment rooms,” said Melinda Moore, who founded the organization with her husband Cedric in 2010. “Two of them will have an observation booth so we can have parents being trained, observing (their kids) from behind a one-way mirror, or parents can be interacting and the staff can be looking on.”

Moore said the organization is purchasing the half-acre plot from S2 Capital Partners, a Northern Virginia-based firm that in 2016 paid $12 million for a piece of Stonebridge, including a retail strip and adjacent land.

The new facility will have a classroom and sensory gym – a play area designed for kids with different sensory-recognition abilities. Spectrum helps people of all ages, but specializes in helping children with autism.

“Spectrum was born out of a need for accessibility to intensive treatment for children with autism,” Moore said. “The sensory gym allows them to get the input they need, or to escape and get a little quiet.”

Spectrum, which also has another location in Harrisonburg, will move its staff of 40 into the new facility. Moore said she hopes to open by yearend.

Union West Construction is the builder on the project. Homeplaces Ltd. is the contractor. Davis & Green Electrical are the engineers and Courtney Ludeman Interiors is handling interior design. The overall cost of the project was not disclosed.

Stonebridge is on the site of the former Cloverleaf Mall, which was demolished in 2011. The overall development was a joint project between Charlotte-based Crosland Southeast and Connecticut-based Hutensky Capital Partners.

The development is anchored by a 123,000-square-foot Kroger Marketplace and has other tenants including Panda Express, Qdoba and Sweet Frog. A Zaxby’s is currently under construction.

Also under construction at Stonebridge is a $7 million, 50,000-square-foot facility for Richmond Volleyball Club. The site also includes Element at Stonebridge, a 400-unit apartment project spread across three buildings.

The acquisition and revoning risk taken by Chesterfield County appears to be bearing fruit after a long incubation period. The Element certainly looks the part as a quality apartment community. It’s not often I congratulate a government for successfully meddling in private sector affairs but they’ve done it right and deserve the accolades. I believe the effort was led by Tom Jacobson.