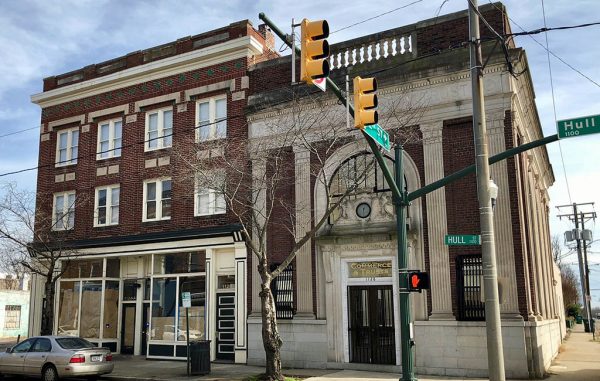 A local couple is doubling down on the Hull Street beer scene, which they are single-handedly creating.

Michael Hild and Laura Dyer Hild, who through their Church Hill Ventures LLC have acquired dozens of properties on and around Hull Street in the neighborhood’s Old Town section in recent years, have another brewery in the works.

The Hilds confirmed Wednesday they are working to open Manastoh Brewing in the old Bank of Commerce & Trust building at 1128 Hull St.

The 3,100-square-foot building sits catty corner to the forthcoming Dogtown Brewing Co., a brewpub they are constructing at 1209 Hull St.

The Hilds purchased the Bank of Commerce property in 2016 from Louise Ware Houses LLC for $525,000, according to city records.

The brewery and restaurant will fill the three floors of the bank building, which was constructed in 1921.

The property also includes a 1,000-square-foot rear addition built in the 1960s, where the Hilds plan to build four additional stories that will house about a dozen apartments. Michael Hild said the addition would involve popping off the existing roof and back wall, extending the building to the alleyway and going vertical.

While Hild would not disclose the amount of investment for the newest project, he said the venture would be owned by Laura and could open by mid-2018.

“Think of Manastoh as one concept with different levels,” Hild said. 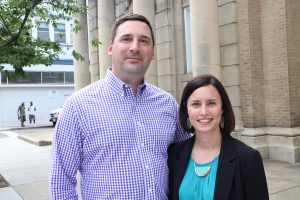 The addition will also create a sixth level that would serve as a second rooftop bar and deck.

Joseph F. Yates Architects has been tapped as the project’s architect.

The project would immediately be sent out to bid for a general contractor if City Council rezones the property to a B-5 designation, Hild said, which would relax parking requirements and allow for more residential density than the current mixed-use designation.

The council is set to vote on rezoning Manchester’s Hull Street corridor at its Feb. 26 meeting.

“We’ve had this planned for a year,” Hild said. “But with the existing zoning, you needed that extra density to make it work, and when we purchased the building, the numbers weren’t there … so we had to delay the plans.”

The name Manastoh honors the original Native American population in Manchester before it was settled by English immigrants in the late 1700s.

It was also a tribute to Laura’s grandfather Earl Smith, a member of the Monacan Tribe who advocated for equity in government and military policies that affected Native Americans.

The Monacan Tribe was granted federal status as a Native American tribe in January.

“It just seemed fitting to pair the announcement with the Monacan Tribe being federally recognized,” Hild said.

Manastoh’s menu will pay homage to the region’s native game, using locally sourced ingredients, meats and fish. Hild said they are working out other details, including the size of the brewing operation.

Manastoh will be the Hilds’ fourth active project along that stretch of Hull Street. In addition to Dogtown Brewing, work is underway to redevelop and open a Hot Diggity Donuts at 1204 Hull St. and Butterbean Market and Café at 1213 Hull St. They’ll look to open the donut shop in April, Hild said.

As for owning two breweries on the same block, Hild said there is room for both Dogtown and Manastoh because they will have varied menus.

“We envisioned Dogtown to be more of a brewpub, while Manastoh will be more involved with the brewery and a full-scale restaurant,” he said. “I think what we are creating is going to be something that will be embraced by the neighborhood, and we’re really excited about what is happening.”

The Hilds are creating a destination in Manchester. RJ Smith has some exciting plans on the 1500 Hull Street block as well. The corridor is exploding with new investment.

After the news of the historic tax credit denial on Broad Street of a brewery, it will be interesting to see if they are trying for the tax credits on this project.