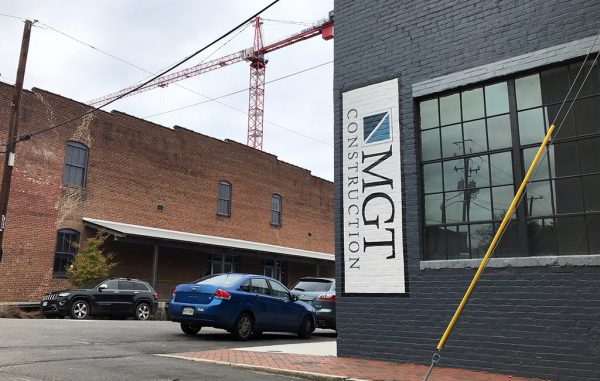 Several months after a lawsuit brought to light an alleged accounting scheme and claimed it had become a “cash drain,” the construction arm of local real estate firm Thalhimer has been put into bankruptcy.

MGT Construction Management filed for Chapter 7 liquidation on Thursday, showing it owes as much as $50 million to hundreds of creditors while claiming only $100,000 to $500,000 in assets.

Founded in the late ’90s, MGT is a wholly owned subsidiary of the broader Thalhimer umbrella, under which the Cushman & Wakefield | Thalhimer brokerage and Thalhimer Realty Partners development arms operate.

Headquartered at 611 Bainbridge St. in Manchester, MGT has done work around Richmond as well as outside the region. Some of its larger local projects have included serving as general contractor on Thalhimer Realty Partners developments.

The Chapter 7 filing comes as MGT had been in the process of winding down, citing financial issues brought into the public eye largely by a lawsuit filed in October in Richmond federal court by former Thalhimer property management head Steve Brincefield.

Brincefield, who retired from Thalhimer in 2012 after 38 years with the firm, claims several of the company’s top executives had a hand in wrongfully depleting the value of the Thalhimer employee stock plan by millions of dollars in part to allegedly cover up troubles and “accounting schemes” at MGT.

The case alleges violations of the federal Employee Retirement Income Security Act, conspiracy, conversion and other counts accusing the defendants of self-dealing and using the stock plan as a “tax-free cash warehouse.”

It claims the defendants discovered the scheme in October 2016 and devised a coverup and unwinding plan to fill the financial hole caused by MGT.

The company has yet to explicitly confirm that the winding down of MGT is related to the allegations made in the Brincefield case. It did admit in court records that it discovered at least one unnamed MGT employee had been “engaging in a fraudulent accounting scheme.” That scheme, the company stated in court filings, caused inaccuracies in its financial statements that had been relied upon in managing the employee stock plan.

Thalhimer released a prepared statement on Thursday, in which it said the MGT bankruptcy filing is “one of the final steps to wind down (MGT’s) business.”

The release quoted Warfield and Mike Kain, a consultant hired last month to take over for Logan as MGT’s president and to take on the role of MGT’s chief restructuring officer.

MGT has no other current employees besides Kain and all its active projects have either been completed or passed off to other contractors or surety bonding firms.

“Closing down a business is difficult for everyone involved,” Kain said in the release.

The company has emphasized in recent months that MGT and its problems are distinct from Thalhimer’s brokerage and development arms and Warfield’s prepared statement on Thursday continued that refrain.

MGT is represented in the bankruptcy case by David Spiro and David Browne of local law firm Spiro & Browne.

It’s unclear how, if at all, the bankruptcy case will affect the Brincefield suit. The defendants in that suit have yet to file responses after successfully pushing back filing dates in order to give Thalhimer time to conduct an internal investigation, the results of which are sealed from public view in the court record.

The next hearing in the case is set for March 7 at 8:30 a.m. in Richmond federal court before Judge John Gibney Jr.

The Chapter 7 filing will put a freeze on any pending litigation MGT itself is involved in. The company has been party to many lawsuits over the years, often involving subcontractors, as both plaintiff and defendant, all not atypical in the construction business.

The rate of its legal issues seems to have picked up over the last 12 months, at least locally. MGT was sued at least six times since January 2017 in Richmond Circuit court alone. It also filed four cases of its own in the city during that time.

The most recent case was filed in Richmond Circuit Court on Jan. 25 by Provost Construction & Sons, which claims MGT owes $305,000 for unpaid work on projects in Richmond and Norfolk.

There should be an article of how many subcontractors MGT has hurt financially through their shady accounting practices that Mike Logan did. I think it is extremely sad when a corporation has big as Cushman & Wakefield/Thalhimer allowed MGT to do their shady practices and they also did not care about the little guy (Subcontractor). I hope the courts will also investigate Cushman & ,Wakefiled/Thalhimer. MGT’s bankruptcy can possible put small contractors out of business….this is just so wrong by every account.

Ms. Harris,
Right you are. It’s taken years but the chickens have come home to roost for this crew. The little guys pay the price even after being beaten down time and again.