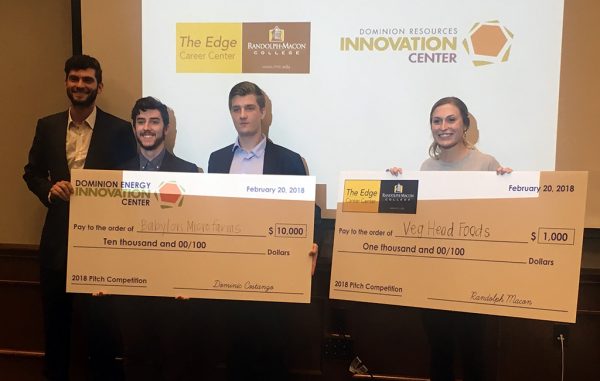 A UVA-born startup focused on water-based gardening is set to sow more seeds after taking home $10,000 in a pitch competition this week.

Startups pitched to a panel of judges that included Virginia BioTechnology Research Park president and CEO Carrie Roth and Startup Virginia executive director Bryan Bostic. The $10,000 prize was provided by the center, an Ashland-based office and coworking space for startups.

Founded in 2017, Babylon makes a “microfarm,” which grows produce through hydroponics, a gardening method using nutrient-rich water instead of soil as a base to grow plants. Babylon has set up microfarms in some Charlottesville eateries and UVA dining halls.

Other finalists were TMI Consulting, a Richmond-based firm focused on diversity in workplaces, and AnswersNow, an online service connecting parents of autistic children with therapists. AnswersNow was part of Richmond-based accelerator Lighthouse Labs’ 2017 class.

In addition to the startup competition, three R-MC students also pitched for a $1,000 prize, provided by the college’s The Edge Career Center.

The competition was the second startup pitch contest in the region in recent months.