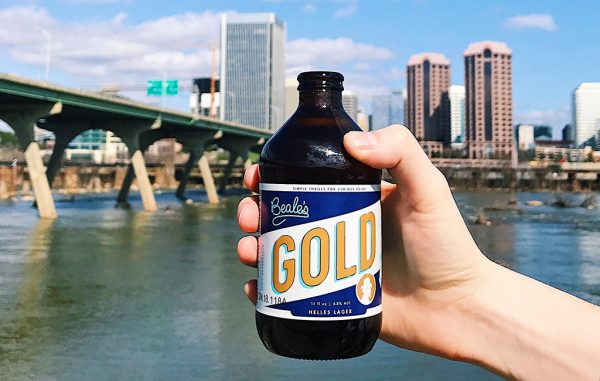 Beale’s, a brewery in Bedford, will begin distributing its beer to Richmond. (Beale’s)

By way of Bedford, Virginia, the sister brewery of a Petersburg beer maker is thirsty for a piece of the Richmond market.

Beale’s, founded last year in Bedford as an offshoot of Petersburg’s Trapezium Brewing Co., has plans to begin distributing to Richmond next month.

The beer coming east is Beale’s Gold, the brewery’s flagship Helles lager. Kegs and eight-packs of 11-ounce stubby bottles will be sold on store shelves and bar taps in the region through Loveland Distributing Co., which Trapezium uses.

Trapezium owner and co-founder Dave McCormack said Beale’s distributes to nearby Lynchburg and Roanoke, and aims to continue expanding its footprint east beyond Richmond.

“The thing that we recognized years ago is there’s a hole in the lager market,” McCormack said. “When it came to distribution, there’s a lot of redundancy … We wanted to create something completely different and hyper-focused on lagers.”

Beale’s, a $2.3 million venture that opened a 15,000-square-foot facility last summer, isn’t the only local brewery to notice an opportunity in the lager market. Hardywood Park Craft Brewery is beginning to distribute its Richmond Lager, which will be brewed at its forthcoming Goochland facility.

Trapezium also has plans on tap for 2018.

McCormack said he aims to have a new brandy still up and running in the Petersburg facility this summer.

Trapezium also is building an outpost in Amherst, Virginia, about two hours west of Richmond. Dubbed Camp Trapezium, the facility will be in a former hydro-powered mill that sits on 100 acres of land, which the brewery purchased last summer.

“We’ll be cultivating yeast from the land, making more Belgian styles and wild beers,” he said.

Camp Trapezium broke ground earlier in February and aims to open in June.

McCormack stays busy beyond running the breweries, as he’s president of Waukeshaw, a development company that specializes in historic rehab projects in Petersburg and the Tri-Cities.