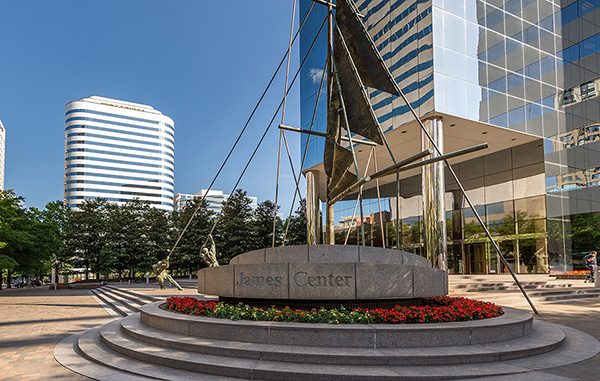 One of the largest office complexes in downtown Richmond is ready for its makeover.

The first wave of redevelopment is slated to begin in coming weeks on the James Center, which spans nearly 1 million square feet across three buildings at 901, 1021 and 1051 E. Cary St.

Bill Goodwin’s Riverstone Properties, which bought the 30-year-old buildings a year ago for a combined $108 million, has tapped architecture firm Baskervill and Hourigan Construction to design and handle tens of millions of dollars’ worth of renovations across the three properties.

Plans call for the renovation of architectural elements that soften and enhance many of the gathering and lobby spaces in the building, Boykin said. A conference center for tenants would be added to the second level.

“These improvements will dramatically update the architectural finishes of the building, bringing exciting new opportunities to the James Center by better connecting our office, retail and parking,” Boykin said.

All the changes would be dedicated to the interior of the building, he said. Similar efforts will then be seen in the other two towers. 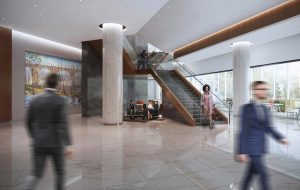 Once the One James renovation wraps up as planned in the fall, Boykin said the next phase of work would spread to the complex’s Atrium – the primary concourse area that connects the Omni Hotel and James Two and Three buildings.

All 33 elevators throughout the complex would be modernized to improve performance. The sky bridge, which crosses South 10th Street and connects the One James building to the Omni Hotel and Two and Three James buildings also would be renovated.

Boykin said the bulk of construction will be completed during overnight hours and on weekends to minimize disruption to tenants.

While he would not disclose the cost of renovations, he said improvements to all three buildings would be in the “tens of millions of dollars.”

Riverstone Properties has hinted on major improvements to the James Center since purchasing the properties last year.

The work is aimed at attracting new tenants to fill 330,000 square feet of vacant space across the three towers.

Boykin would not comment on new tenants that might be in play, other than juice bar and bistro The Pit and The Peel, which is preparing to open in the Atrium section of the complex.