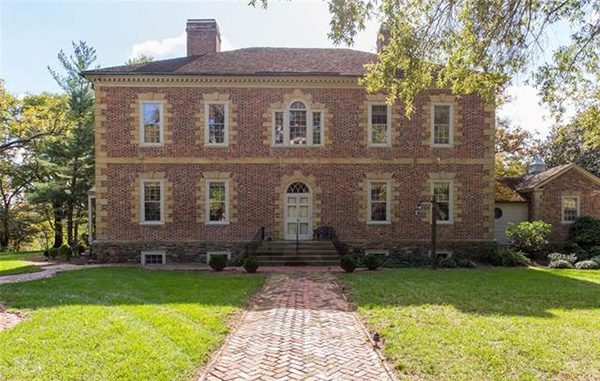 A reconstructed 18th-century home once owned by a relative of Patrick Henry hit the market last week for the first time in 90 years.

The former Garden Club of Virginia president and Historic Garden Week chairwoman owned the home with her husband, Parke Farr Smith, a World War II fighter pilot for the Royal Air Force who flew stunt planes at Kings Dominion and owned a local building supply company before his death in 2013.

The Colonial Revival-style home, originally built in Hanover County around 1750 by Henry’s half-brother John Syme, was dismantled in 1928 and reconstructed at its current location, a 7.7-acre tract to the west of the northern end of the Huguenot Bridge.

Originally called Rocky Mills, the house and outbuildings were moved by Fred Nolting, who sold the property a year later to Alice Smith’s grandfather, Hardy said. The home has been kept in the family ever since and is now owned by the Smiths’ four children, he said.

Hardy said the history and size of the property, along with its proximity to the city and the University of Richmond, make the listing unique. He said those factors, coupled with two independent appraisals, helped him determine his list price – as did the sale of a comparable property nearby: the since-demolished mansion at 101 S. Ridge Road that sold in 2016 for $5.5 million.

That home – the most expensive to be sold in the Richmond area in years – was demolished last year. The buyer, Matt Goodwin, son of local philanthropists Bill and Alice Goodwin, is building a new house on the 6.3-acre property that’s estimated to cost upwards of $2.7 million, according to a permit filed with the county. The house is being built by John W. Montague Jr., a Manakin-Sabot-based builder who also did the demolition.

Hardy said the Goodwin sale, even though the house was demolished, factored into his decision to list Fairfield at $5.9 million.

“There was a beautiful home on it, but that home is no longer in existence, so in essence that purchaser paid about $5.5 million for that parcel, which is about 7 acres as well,” Hardy said. “That influenced our opinion.” 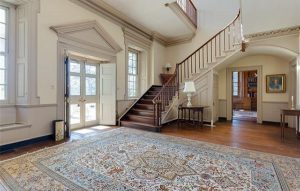 The Colonial Revival-style home was built around 1750. (CVRMLS)

Hardy said he has received interest in the property, which was marketed privately before it was publicly listed Wednesday.

The two-story home totals four bedrooms, 5½ bathrooms, 7,000 square feet of finished living space and a 3,000-square-foot unfinished basement. It was last transferred in 1968, when it was gifted to Alice Smith, with a transaction price of $101,100, according to county records. The property was most recently assessed by the county at $1.01 million.

The property includes a swimming pool and pool house that can serve as a guest space, a detached three-car garage with upstairs apartment and an attached one-car garage.

Designed by Herman Louis Duhrig Jr., the house is listed on the National Register of Historic Places and described in Henrico’s “Inventory of Early Architecture” as “one of Virginia’s most notable 18th-century Palladian mansions,” notable for its interior details and block-like stonework façade.

A 2002 easement restricts construction of additional buildings on the property and prohibits alterations or demolition of the house or outbuildings.

Preston S. Smith, one of the four Smith children selling the property, said they’re doing so to fulfill their parents’ and grandparents’ wishes.

“They’ve been great stewards of the property and have known what’s best for the home,” said Smith, who grew up in a house next door. “If you went inside the house, you wouldn’t think it was close to 300 years old.”

Smith, who works at a local investment counseling firm, recalled decades’ worth of memories from weddings and family gatherings. While the family is ready to bid Fairfield farewell, he said they’re not necessarily in a rush to do so.

“If we don’t sell the house or people aren’t interested, we’ll keep it. We’ll have more parties,” Smith said. “Hopefully somebody will be able to step in and carry it on. It’s a great history, it’s a great house, we’ve loved it, and it’s bittersweet.”