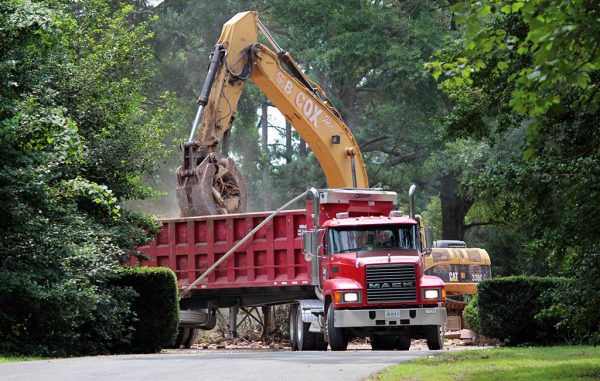 Crews pile debris into a dump truck on the property at 101 S. Ridge Road. (Jonathan Spiers)

The most expensive home sold in the Richmond area in years is now no more than a pricy pile of rubble.

Midday Thursday, the 7,000-square-foot colonial-style home was no longer visible from the road, as crews used an excavator to pile debris into a dump truck. A detached garage and pool house remained intact on the 6.3-acre property near the University of Richmond.

The work appears to clear the way for a new house to be built on the property, which was purchased last June in an off-market sale by 101 South Ridge Road LLC.

A message left for Matt Goodwin at his office Friday morning was not returned.

A demolition permit filed with Henrico County lists the contractor as John W. Montague Jr., a custom homebuilder based in Manakin-Sabot. The work was estimated to cost $50,000. The excavator displayed signage for Richmond demolition firm S.B. Cox.

Built in 1937, the eight-bedroom, nine-bathroom mansion was one of the priciest home sales, if not the most expensive, in the Richmond area in recent memory. Dover Hall, the 33,000-square-foot “castle of Goochland,” sold in 2013 for $5 million.

Meanwhile, a block away from the Goodwin property, another notable residence recently went under contract: the 19th-century Windward mansion, which was listed last June for $2.9 million. The nearly 10,000-square-foot home, owned by Donna Sharp Suro and relocated from Dinwiddie County nearly a century ago, had a sale pending three weeks ago. 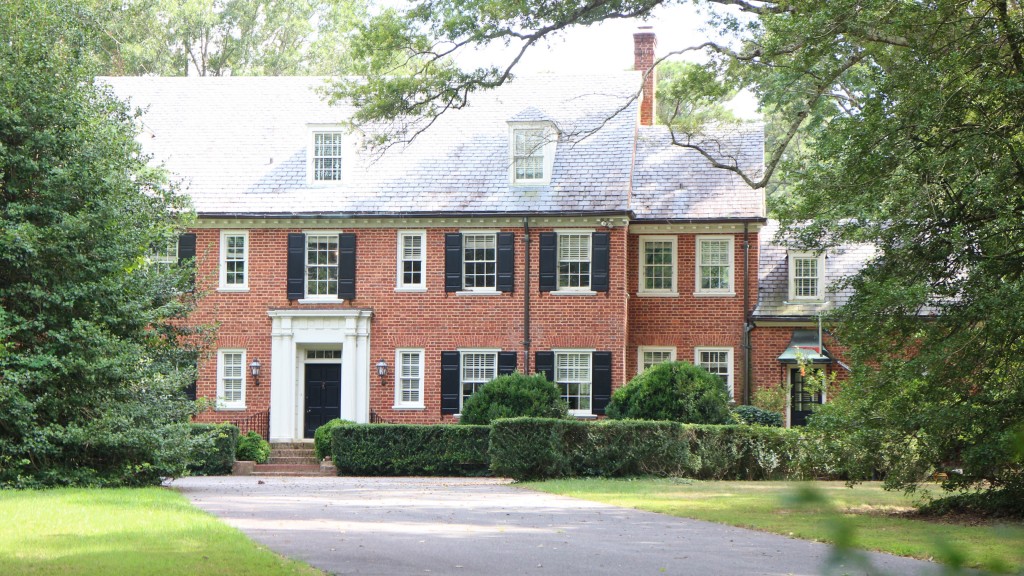 It’s not apparent why the current generation chose to demolish this home, and there may we be very legitimate circumstances, it’s sad to see such workmanship and history wiped out. Not a judgement, just an observation.

Wise decision by the property owner. Valuable, historic homes have no place in neighborhoods around Ridge Road and should be destroyed. Hopefully the guest house and pool will be dismantled as well.

Why was it destroyed? Couldn’t it have been renovated to modern day standards?

There’s another way to look at this: land in that neighborhood is now officially $1 million per acre.

Can’t wait to see the new McMansion go up!

It seems odd to buy this property if the intention was to destroy the house. Maybe there was damage to the house that is unknown to general public? If the plan is to build a NEW home, then why not build elsewhere and spare this structure?

Having watched this process from the beginning, I know the Goodwin’s badly wanted to save the all of the original structures on the property. After months of studying feasibility with the architect and contractor it just didn’t make sense to save the main house as it would have cost more money and still not given them what they were looking for in terms of functionality. In my line of work we are fortunate to get to see many of the interiors of these beautiful older Richmond homes. In many cases the curb appeal far exceeds the functionality of the layout… Read more »

an 80 year old ersatz colonial is not a great loss. perhaps a smaller, greener and more energy efficient home may take its place. in any case, one can do what one wants with one’s property.

Mia, as the saying goes “The Greenest Building is the one already standing.” Even if the house is replaced by a home with the latest in green technologies and building practices, it would likely take decades for those energy efficiency improvements to justify demolition and reconstruction in terms of the environmental impact. Not to say they don’t have every right to tear down and rebuild as they see fit, and one can only hope that whatever they build is as energy efficient as possible but the idea that one can tear down and rebuild for efficiency’s sake is kind of… Read more »

It’s a pretty brick colonial, but I haven’t heard any hard facts that it actually has real historical significance. Three houses from the 40’s on Leonard Parkway have recently been torn down to the foundation, and it certainly wasn’t newsworthy. I’d say if there was a family that had done right by Richmond, for decades, it would be this family. Let’s trust their judgement on this one.