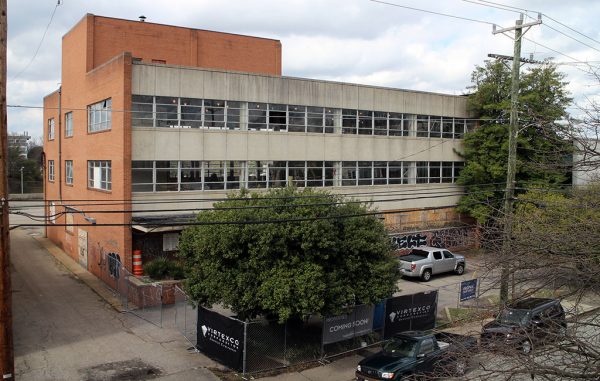 A boarded-up office building near Scott’s Addition is being turned into apartments by a team of sister real estate developers.

Sarah and Mary Krumbein are leading the redevelopment of the 20,000-square-foot building at 1004 N. Thompson St., along the Museum District side of Interstate 195, into two-dozen market-rate apartments and two income-based units.

“We were really excited about the mid-century-era architecture and making sure that that’s preserved in Richmond,” Krumbein said.

She and Mary – a graduate of New York’s French Culinary Institute who works for their father’s local company, Richmond Mortgage Inc. – have been investing in real estate since 2004 through their company, Hampshire Properties. The projects have ranged from house rehabs in Northside and Church Hill to a multifamily building in New York, where they previously lived.

For the Thompson Street project, the Krumbeins secured state and federal historic district designations for the row of six buildings, now known collectively as the North Thompson Street Historic District. The designations give the buildings historic property protections while also making the project eligible for historic tax credits.

The Krumbeins are touting the project as the first multifamily development to use Richmond’s Affordable Dwelling Unit Program, which allows developers to increase the density of their projects above existing zoning if they designate a percentage of their units in a given project to income-based rents.

As a result of the density bonus, the building will include two income-based, one-bedroom units with a maximum monthly rent of just under $1,050. The rest of the building will be filled with market-rate units – 18 one-bedrooms and eight two-bedrooms – with rents ranging from $1,100 to $1,650. Unit sizes will range from 600 to 950 square feet. 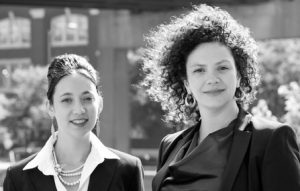 “So it’s a small percentage,” Krumbein said of the project’s ratio of market-rate to income-based units. “But we’ve helped bring the program to life with the City of Richmond’s help.”

“We think it’s a really good incentive,” she said. “We also see a lot of affordable housing and interesting zoning techniques taking place in other markets, so we’re excited to be part of bringing them here and using the ones that are on the books so that other people can use them as well.”

Preliminary site work started last month, and Krumbein said they aim to complete the rehab to begin leasing by yearend. Virtexco Corp. is the general contractor, and New York-based Sebastian Quinn Building Workshop is the architect.

The apartment conversion adds to other development reshaping the western edge of the Museum District.

On the other side of Thompson Street, Carter Snipes’ Meridian project – a row of eight modern-style rowhouses – is taking shape at the corner of Thompson and Cutshaw Avenue.

Farther south, Oliver Properties’ Carytown Crossing added 50 new apartments at Thompson’s crossroads with Patterson and Kensington avenues. Nearby, the renovated Gallery Midtown apartments were recently put on the market by Spy Rock Real Estate as part of its Midtown Apartments portfolio with The Davis Cos.

This is an exciting development along the edge of the Museum District, as it sits at the Northwest entrance to the community. Those buildings are in desperate need of renovation. Welcome to the MF community to the Krumbein sisters.

Kudos for them in seeing beauty in what others see as an eyesore. It looks like it might be ripe for a roof deck, which would be awesome.

I believe a roof deck is planned!

Glad to see the rehab, Bruce is right that site was looking bad. Still worried that the appeal of a mixed use community that makes places like the Fan and Museum District appealing is being lost as everything is built or rehabbed is into residential rental.

problem is city zoning makes that the easiest thing to do – we need to change city zoning to be more city, and less fake suburban. Getting rid of parking requirements would be a good first step. It should be a business decision, not an attempt to be a second rate short pump with a sea of parking lots.

Charles I agree and in order to change the zoning, we need to update the 1999 Master Plan. The plan says Scott’s addition is light industrial with part of Manchester as heavy industry. A lot of Special Use Permits are because the Master Plan and reality and zoning are out of date. The Richmond 300 (Mayor’s name for update) is a political joke that in 1-year into it they are already behind and still have no scheduled public hearings.

The City does have zoning districts that do not require off street parking. It would need to be rezoned. Zoning is zoning and a master plan is only a plan/guide and is not necessarily binding. Two different things and by state law one does not need to be updated for the other to change. Didn’t they just approve a new district for Scotts Addition that provides more flexibility like your suggestion?