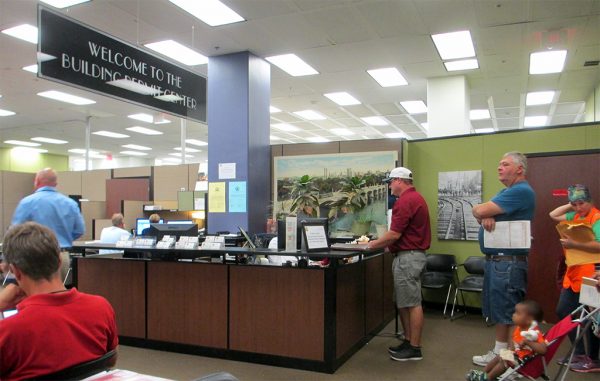 Applicants in line at the city permitting center. (Jonathan Spiers)

Three months after implementing changes aimed at improving operations, Richmond’s building inspections and permitting office has reported its highest daily number of applicants received as it awaits physical upgrades that could further drive up those numbers.

During the third week of February, the city permit center twice saw nearly 90 applicants come through its doors over the course of a day, said Doug Murrow, the city’s buildings commissioner who oversees the office.

That’s up from an average of about 55 visitors per day since the bureau started tracking such numbers last May, Murrow said.

Those changes include adjusted operating hours – 7:30 a.m. to 4 p.m. – aimed at capturing peak demand times, emailed permits to reduce wait times, and validated two-hour parking for visitors in the city deck at Seventh and Marshall streets.

Plans announced in November by Mayor Levar Stoney also called for physical improvements to Room 110, intended to facilitate customer flow and ensure a “one-stop shop” experience. Funding for that work – $500,000 – has been allocated and a project schedule set, though later than Murrow said he had been hoping.

The upgrades are being handled by the city’s capital projects office, which Murrow said anticipates initiating the work after the start of next fiscal year, which begins in July.

“I was certainly hoping it would happen long before that,” Murrow said, “but that at this time is the schedule that I have, that the renovations to our lobby to make it flow much better will happen in July.”

The $500,000 set aside for the upgrades was moved from the city’s five-year capital improvement plan budget. Mark Olinger, director of the city’s planning and development review department, which includes the inspections and permitting bureau, said the funds were reallocated from projects that were not moving forward.

The renovations are to be designed by local firm Moseley Architects, which Murrow said has an annual contract for architectural services for City Hall renovation projects. A contractor for the work has not been selected.

On top of the desired room alterations, filling and maintaining budgeted staff positions has been a challenge for the bureau, which had at least four vacancies when Murrow addressed complaints about response times last summer. Murrow said his office became fully staffed a couple weeks ago, though he noted the additions are in the process of getting trained.

“It will take a month or so before they are able to provide good, reasonable service,” Murrow said. “But we do have the extra bodies here now, and that should give us some relief. Two of the individuals are design professionals, and I think the transition for them coming into this type of environment will go very quickly.”

Wait times at the center continue to be long, Murrow said – numbers he attributes to a high volume of permit applications. Murrow said wait times have ranged from a daily average of 35 minutes to as long as 75 minutes.

“As new staff becomes comfortable with our system, we will see those numbers drop,” Murrow said.

Meanwhile, that system, which is transitioning to digital, continues to roll out its EnerGov Citizen Self Service platform, which applicants can use to file plans electronically and track a permit’s review status. That platform went live earlier this year, and Murrow said adjustments are being made by the vendor and additional components will be rolled out this summer.

The city awarded a $1.63 million contract to Georgia-based EnerGov Solutions for the system upgrades in 2012.