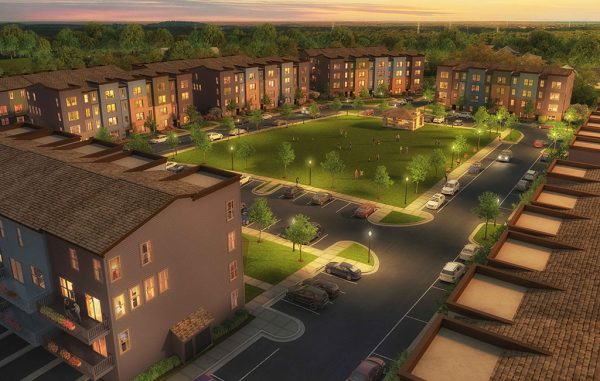 A homebuilder already busy in western Henrico is getting even busier with two infill developments set to add hundreds of homes off a stretch of West Broad Street.

Reston-based Stanley Martin Homes is looking to build more than 300 condos between two projects planned within a quarter-mile of each other: the 15-acre Wistar Glen, planned for 160 homes at 4613 Wistar Road; and the 13-acre West Broad Landing, planned for up to 200 condos at the former Lawrence Dodge dealership at 7411 W. Broad St.

The company closed March 1 on the purchase of the Wistar Glen site, an undeveloped tract along Wistar Road behind the Merchants Walk Shopping Center on the other side of Broad. It plans to construct 136 condos there, with the rest of the site to be filled with 24 townhomes by another builder.

The seller purchased the land in 2007 for $1.5 million. A county assessment most recently valued it at $1.4 million.

The site was rezoned for the development last year by local developer Hank Wilton, who had the property under contract before selling the contract to Stanley Martin, said Jeremy Swink, the company’s Southern region vice president of land.

Plans call for the condos to be built “two over two,” meaning two-level units stacked on top of one another in four-story buildings – similar to Stanley Martin’s condos at Saunders Station at Broad Hill Centre.

Swink said the builder behind the townhomes has yet to be announced. He described the project as a joint venture with another company that he said he could not yet name.

Plans for that project call for up to 200 condos, likewise “two over two”-style in four-story buildings, with floorplans starting at 1,350 square feet and prices starting in the low $200,000s. Four acres fronting Broad Street are designated for commercial development, while plans show the rest of the site filled with 18 condo buildings around a central open area.

Stanley Martin is under contract to purchase the property, which remains owned by Lawrence Motor Co. and operated as a dealership dating back to 1979.

If rezoned next month, Swink said the West Broad Landing project would go forward with development plan review and could start going vertical by first quarter 2019. Andy Condlin with Roth Jackson is representing Stanley Martin in the rezoning process.

Swink said the Wistar Glen project, already zoned, is expected to start construction in the third quarter this year.

He said all the condos are priced around the county’s median household income – about $63,700, according to the U.S. Census – with a goal of appealing to as many buyers as possible.

“We want to be an alternative for move-down buyers, and for somebody who wants to move to the West End for schools, so they can do that without spending $500,000 on a single-family detached house,” he said.

“We’re not targeting the median household income, but it’s important to be conscious of what that is, so that you can reach a broader audience and, candidly, an underserved audience.”

Swink said the Saunders Station condos have sold well since the first units sold there in late 2016. Of 166 units built, 90 have been sold, and Swink said the company estimates the rest will be sold by the end of next year.

Of the “two-over-two” product that’s become a local hallmark for the company, Swink said: “It’s not the only trick in our book … But it’s a very efficient use of the land, and it’s a way to hit an underserved segment of the market.”

Similar-style condos also are slated for Stanley Martin’s planned Lakeside Landing development beside the Brook Run shopping center on Brook Road. The company is proceeding with that project and has submitted development plans, which call for 88 condos and 24 townhomes, all to be built by Stanley Martin.

The company has revved up its building activity since entering the local market in 2014. In addition to four other properties in Henrico, it’s building homes in Collington and FoxCreek in Chesterfield, detached homes at Leakes Mill at Bacova and condos at Riverwalk at Rocketts Landing.

Finally something will be built on the Lawrence site! That stretch of Broad Street has long needed revitalization but it was an odd duck for commercial uses. I like this SM product a lot. It provides needed density along the West Broad corridor.

How odd that they would build a community around a common courtyard, and then put the outdoor living spaces off the backs of the dwellings. I love this idea, but would love to see more variation in the facade, with porches and patios that make it feel like a true community. And maybe a protruding awning or roofline to break it up a bit.