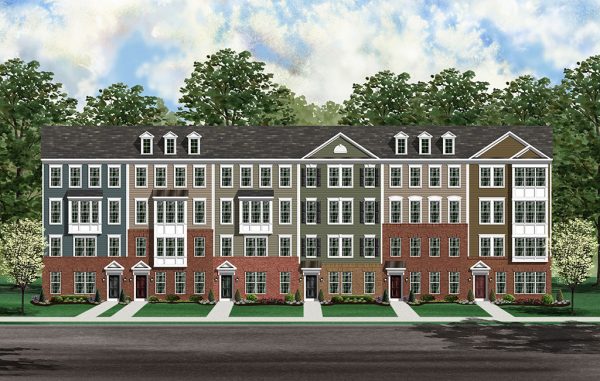 A gaping hole in a Henrico County shopping center soon could be filled by as many as 130 homes.

Reston-based Stanley Martin Homes is looking to rezone just over 10 acres beside the Brook Run shopping center on Brook Road for 88 condominiums and 42 townhomes. The county planning commission is scheduled to consider the request this Thursday.

Plans submitted to the county call for nine three-story townhome buildings and six four-story condo buildings behind retail outparcels lining Brook Road and between the shopping center and the adjacent Atlantic at Brook Run, a four-story building housing 120 age-restricted units.

The two parcels up for rezoning, totaling 10.26 acres at 5912 and 6010 Brook Road, were previously graded and planned to become part of the adjacent 1990s-era shopping center, according to county documents. Stanley Martin is seeking a change from business zoning to residential use to accommodate its proposal, with representation from local attorney Andy Condlin of Roth Jackson.

Stanley Martin is under contract to purchase the land from Village Bank, which acquired the two parcels in 2012 through a foreclosure sale for $1.02 million. The previous owner was Tetra Investment Group 14 LLC.

Jeremy Swink, Southern region vice president of land for Stanley Martin, said the company was drawn to the site’s proximity to downtown and transportation routes such as Interstate 95.

He said Stanley Martin also saw an opportunity to help revitalize the shopping center, which, according to the county, has garnered minimal demand for additional retail development since the outparcels were built in the early 2000s. The center, owned by Virginia Beach-based Wheeler Real Estate Co., lost its Martin’s Food Markets anchor in August.

“It seemed like the right revitalization play, where we could make an investment in the community and add some value,” Swink said. “By investing there, we hope to see some positive activity in the shopping center, by putting 130 units behind it and bringing a product to the market that’s going to be attainable for the median household income for Henrico County.” 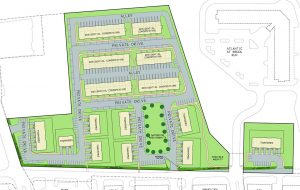 A site plan for the proposed residential development. (Stanley Martin)

Units would range from 1,500 and 2,500 square feet for the two-level condos, which would be stacked in the four-story buildings in the same “two-over-two” fashion as the condos Stanley Martin is building at Saunders Station at Broad Hill Centre. The three-story townhomes would total 2,100 square feet.

The townhomes would range from two and three bedrooms, while each of the condos would total three bedrooms. All units would include single-car garages.

Plans call for a gathering area in the center of the development. Swink said other amenities are being considered.

If approved as scheduled, he said, construction could start in 2018 with the first units available in 2019. The units would add to Stanley Martin’s other properties around Richmond, including Saunders Station and four others in Henrico, and homes in Collington and FoxCreek in Chesterfield. The company also is building condos at Riverwalk at Rocketts Landing and detached homes at Leakes Mill at Bacova.

In its report to the commission, county planning staff expressed support for the Brook Run project, noting its proximity to commercial uses and transportation corridors and its potential impact on the shopping center and adjacent Atlantic at Brook Run.

The report states the development “could complement the adjacent age-restricted multifamily community” and “could also serve to bolster the adjacent retail uses, which have faced challenges in recent years.”

Despite the loss of Martin’s, the area around Brook Run has attracted additional investment of late, with the recent construction of an Ample Storage facility next door at 5500 Brook Road. To the north, the county-owned Belmont Golf Course is slated for bunker rehabs that have prompted further discussion.

That site has had an interesting history over the last 15-20 years involving multiple law suits and strange turn of events. There have been some successes among the small retail buildings developed by Tetra and the The Atlantic at Brook Run built by Guy Blundon. Stanley Martins new community would be a boon to that corridor bringing much needed for sale housing in a very convenient location. Larry Shaia owns an interesting assemblage of single family lots down the street that could also lend itself to revitalizing that area.