The above map shows the 10 stores that will become Publix in red, and the closing nine in green.

The fate of one of the largest casualties of the Greater Richmond grocery war has been sealed.

Martin’s Food Markets on Wednesday formally announced closing dates for its nine remaining stores in the Richmond area that aren’t being converted into Publix stores as a result of a massive European merger-fueled deal.

The closures will come in two waves this summer. On July 10, the Martin’s stores at Chesterfield Meadows, Chippenham Crossing Center, Chesterfield Towne Center and Monticello Marketplace will close.

The closures will bring an end to Martin’s brief history in Richmond. Based in Carlisle, Pennsylvania, the chain entered the local market in 2010 after it acquired Ukrop’s supermarkets for $140 million.

These last nine locations are those that weren’t chosen last year by Florida-based Publix, which purchased 10 areas Martin’s stores as part of an anti-trust sell-off that resulted from the merger of the parent companies of Food Lion and Martin’s. 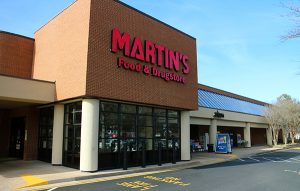 Broker Jim Ashby of Cushman & Wakefield | Thalhimer manages leasing for a few of the soon-to-be-vacant Martin’s boxes. He said the ultimate goal is to find other grocers to replace them.

“A lot of grocers are waiting to see what impact Publix has on the Richmond market,” Ashby said.

Publix has disclosed only that it will open its Richmond stores in 2018, and renovations on some of the former Martin’s stores have begun.

Another former Martin’s storefront that closed prior to the Publix deal already is being used: Goldfish Swim School leased part of the former Martin’s at Gayton Crossing shopping center. It will be joined in the 38,000-square-foot building by a to-be-announced national gym brand.

Martin’s departure lines up with German grocer Lidl’s planned arrival in Richmond. Lidl has snatched up seven pieces of property around town, and plans to open all seven stores simultaneously this summer.

Feel bad for the folks in Ashland. The grocery options is down to Food Lion, WalMart, and good old Cross Bros Grocery still going strong for over 100 years. Guess if they want more options they’ll have to head to Publix when it opens at Virginia Center Commons.

All the jobs lost, and who’s the bad guy – Martin’s? Publix? How about the US Government Regulators for forcing the divestiture in the first place!

…. Because monopolies are such a good alternative. Please, this isn’t 1885.