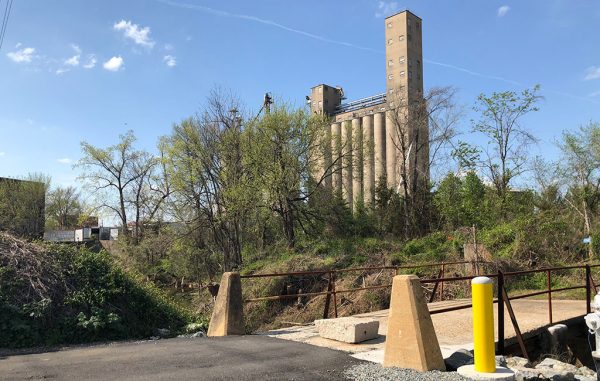 A squad of well-known local developers has their sights set on a Manchester plot next to the highly visible Southern States silos.

A group comprised of Fountainhead Development’s Tom Papa and WVS Cos.’ Jason Vickers-Smith and Richard Souter is under contract to purchase nearly 4 acres at 3 Manchester Road, where they’re pondering a potential mixed-use development.

The team is seeking a rezoning of the four parcels from riverfront district to central business district, according to an application filed last month with the city’s department of planning and development.

Lory Markham, whose agency Markham Planning is handling the rezoning appeal on behalf of the development team, said the change would let the developers seek more residential density and height on the site, beyond the six stories allowed under the current designation.

Markham said during a Manchester Alliance neighborhood association meeting last week the developers are eyeing more than 200 apartments on the site with some commercial uses. The group also is looking into adding an amenity area along the canal, and researching ways to improve the infrastructure – specifically traffic in and out of the proposed project.

Papa and Souter could not be reached for comment Friday.

No design or construction timelines have been set for the proposed project.

The group’s rezoning request could go before the planning commission and City Council in late summer or early fall, Markham said.

Pending the outcome of the rezoning, the development trio would purchase the site for an undisclosed amount. The parcels were most recently assessed at a combined $1.5 million, according to city property records.

The property has long been used for truck storage and parking, and includes a dilapidated vacant industrial building.

City planners flagged the area nearly a decade ago to be developed consistent with Richmond’s Urban Center Character Area, which calls for shedding the neighborhood’s longtime industrial footprint to allow for more residential and commercial density, and ultimately leading to its riverfront zoning designation.

But as Manchester’s popularity has soared, so has the desire to develop taller, denser developments.

Fountainhead and WVS Cos. are no strangers to density.

The two groups are behind a $58 million, 12-story apartment building under construction at 1001 E. Byrd St., on a 1.2-acre site between their Locks development and Riverfront Plaza. They also are working together on a 105-unit apartment building at West Grace Street and Stuart Circle that will replace a parking lot behind St. John’s United Church of Christ.

With the neighboring property under contract, the owners of the Southern States Co-op silos at 4 Manchester Road are taking note.

H. Pettus LeCompte, one of the managers of Riverfront Silos LLC, which owns the facility, said the firm has no plans to sell the property – for now.

“Never say never,” LeCompte said of the 80-year-old structure. “But at this time we have no plans to sell the property … we’re going to hold on to it as is.”

Riverfront Silos purchased the 2-acre silo facility at the foot of the Mayo Bridge in 2004 from Southern States for $1.1 million, according to city records.

Recognizing Manchester’s changing landscape, LeCompte said the site, if it were to be sold, would be better suited to accommodate a mix of commercial or residential uses.

“What’s there is not the best use as the city has progressed,”he said. “There used to be more industrial, and now that is transitioning to be more habitational. Manchester is an exciting place, so whatever goes on our property down the line, it will be significant.”

Richmond is going UP!

I always thought this site, if it had been done a decade ago, would have made a great place for a development incorporating a new Squirrels stadium: overlooks the James and RVA skyline and potentially easy access to the highway. Oh well. Excited to see Manchester growing!

Designs for a ballpark were done about ten years ago on the site of the Reynolds property on South Canal. I too thought it would be a good location.

Still waiting for the up par Bruce. Austin, Charlotte, New York, Toronto. That is up. We still stop at the 15 floors or less level. Obvious those commenting never walked the old industrial site and the smelly industrial canal and hum of that electrical substation. You go by the site on a Slave Trail Walk. Has potential but so does that Echo Harbor site.

We can’t command the rents to go much higher in construction than 8 floors above podium parking. The costs increase exponentially.

You are aware a ton of cyclist utilize the gravel Manchester Road to gain access to the Poop Loop trails?

The weird thing is that the silo blocks most of the view of downtown Richmond from this site. Not very appealing for a residential tower unless the silo can be removed. It’ll be interesting to see how this plays out.

I also hope the developer will design and build something better than their track record has been (I’m looking at you WVS who is building the hideous and squaty 12-story cube next to the Riverfront Plaza).

Eric, have you seen anything other than the conceptual used during the North Canal rezoning case and shown here on BizSense? The developer rarely goes to the expense of a full design until after the zoning is settled.

I have not, honestly; however, my experience is that the design doesn’t change that drastically…usually. I’m hoping that it does and proves me wrong. I was disappointed in both the height (considering the location) as well as the design. Do you have a link to another design/design modification I can see?

Looks like a good site for a Polycrete building. Energy efficient, acoustically superior and concrete won’t wash away if the floodwall breaches. 😉