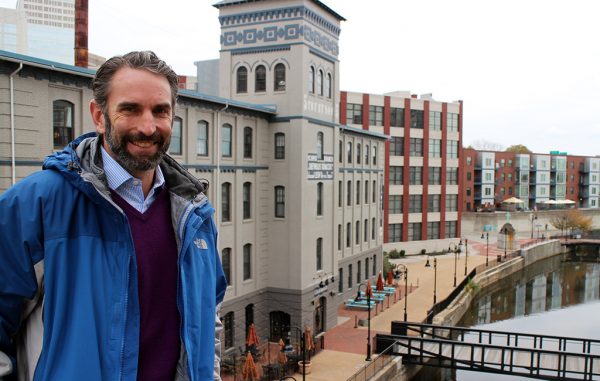 WVS Cos.’ Richard Souter at the Locks along the canal. (Jonathan Spiers)

With a previous plan for a taller bank-anchored tower scrapped, a local development team is shifting to a new project to continue what it started with its downtown Locks development.

WVS Cos. and developer Tom Papa are planning a 12-story, 237-unit apartment building at 1001 E. Byrd St., on a 1.2-acre site between the Locks and Riverfront Plaza. The parcel previously was planned for a 21-story, SunTrust-anchored tower to be developed by Dominion Realty Partners, which had been under contract to purchase the property.

After SunTrust pulled out, that cleared the way for WVS and Papa to go forward with other plans for the site – part of the multi-building former Reynolds North plant along the canal that they began redeveloping in 2012.

“When we got the property back, we elected not to add additional office space into our building,” said Richard Souter, WVS executive vice president. “It kind of complicates financing a little bit for us. Plus, we thought there was enough existing office space in downtown that we really didn’t need to add to that.”

The ground floor of the building will include 12,000 square feet of commercial space, while the rest of the C-shaped tower will be filled with one- and two-bedroom apartments ranging from 570 to 1,200 square feet, along with nine larger top-level penthouses with outdoor terraces and significantly higher rents.

An existing warehouse currently used for parking for the Locks will be torn down and replaced with a newer parking structure alongside South 10th Street and a canal-facing end-structure with four levels of additional residential and ground-level commercial space.

Souter put the development cost for the project at $58 million, to be financed with a loan from the Virginia Housing Development Authority. 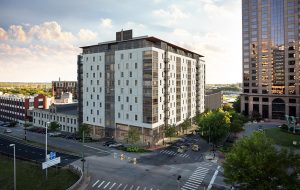 “We’ll be pushing the upper limit of the rental market.”

Amenities will include a gym and an 11th-floor pool with a clubhouse and deck with views of the river.

Souter said the project is being designed around plans to extend the canal walk on the north side of the canal from where it currently ends at Casa Del Barco. He said the city has a two-phase plan to extend the walk under the 11th Street bridge to connect with 10th Street, with a curved stairway leading up to 11th Street.

Souter said the southern end of the new project with commercial along the canal and four levels of apartments above is meant “to dress it up for the future canal walkers.”

“The commercial that we’ll build there will be built to accept the canal walk when that gets built,” he said.

Walter Parks Architects is designing the building, and KBS is signed on as the contractor.

The project would nearly wrap up the Locks, a collection of five rehabbed buildings that currently total upwards of 200 apartments. The tower would bring the total to 460, Souter said, with a final development phase planned on the south side of the canal. A city-installed footbridge connects the two sides, adjacent to the undeveloped Haxall Canal hydro plant structure.

At the east end of the Locks, WVS is also working with developer Charles MacFarlane on a 10-story Hyatt Place Hotel that would replace an existing warehouse beside the Lady Byrd Hat building largely filled by CarMax. A dispute over access to an alley between the properties earlier this year prompted a lawsuit between the Locks developers and Margaret Freund’s Fulton Hill Properties, which redeveloped and manages the Lady Byrd building.

With the addition of the hotel and Envera Health leasing space at the nearby Riverside on the James, where more residential units add to the area’s total, Souter said the area once known for producing reams of aluminum foil is realizing its promise as a downtown hub.

“The residential units at the Locks have done very well,” Souter said, adding that the buildings are almost fully leased.

“We’re working with Charles MacFarlane to do a hotel on the other side of the project. Hotels are really not our forte, but we know the residential market. What we’ve built already is doing well, and we thought we could add more units to the mix and still be successful.”

The tower isn’t the only collaboration between Papa and WVS, also the developer behind Rocketts Landing. Led by Souter and co-founder Jason Vickers-Smith, WVS is also working with Papa on a 105-unit apartment building at West Grace Street and Stuart Circle that will replace a parking lot behind St. John’s United Church of Christ.

Note: This story has been updated to include the architect and contractor signed on for the project. The acreage of the site has been corrected as well.

WVS Has the deep pockets necessary to complete the Reynold North Plant property and replace those ugly brown metal buildings with modern housing and a hotel. They’ve done a beautiful job with Fountainhead thus far on it. When it’s complete the City will have a vibrant canal front from 14th Street all the way to 4th. So what becomes the Power Plant Building? Is it destined for removal? I know it’s for sale and been so for more than ten years but what are the prospects for a concrete monolith with poor access and in the floodplain?

Eric is right. This needs to go back to the drawing board.
Not because it’s not tall enough; it’s simply hideous. This might honestly be the worst proposal I’ve seen in many years and that’s saying quite a bit.

Where is Chris Fultz when we need him! I want his opinion on this.

What really needs to be addressed is the boring, poor, uninspiring design of this proposed “giant cube.” This location begs for something much more as it is right on the riverfront, in the much taller financial district, and is most visible to anyone from the south looking north. What a complete let down and, what I feel, is an almost complete waste of space. WVS should go back to the drawing board and do this design right. I’m not opposed to an all residential tower, but make it a real tower – this giant ugly block is NOT a tower.… Read more »

I love that more vibrancy will be coming to the canal walk, but yeah, the giant cubiness of this is overwhelming. How about breaking up the mass with some interesting and varied shapes and heights?

You have a rare, unique opportunity to to put an iconic stamp on our shared, built environment, don’t take that responsibility for granted and make us all look at mediocrity every time we drive by, or even worse divert our eyes in disgust. Why is it so hard to get developers to design buildings we can get excited about? Our beautiful city deserves more than these semi-modernist kinda-contemporary failures in imagination box things….and I’m looking at you too, Rockets Landing.