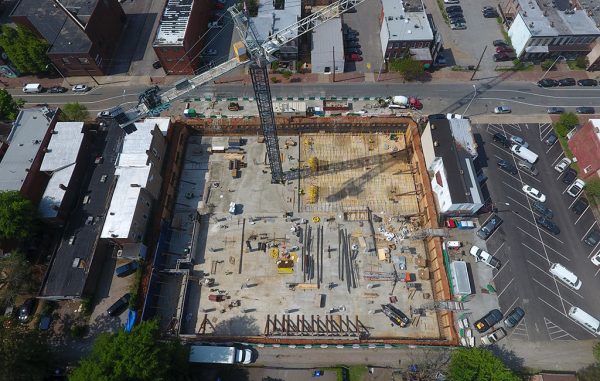 Construction is underway on The Marshall at City Center in Jackson Ward. (SNP)

A development duo behind one of the largest mixed-use projects under construction in Jackson Ward says it has no plans of slowing down as it looks to amass more real estate in the vicinity.

Since buying into the neighborhood last summer, Eric Phipps and Bryan Smith of SNP Properties have unleashed a fury of investment throughout a two-block stretch of downtown that reaches over both sides of West Broad Street.

“We see a lot of opportunities in the area,” Phipps said.  “Initially, that’s what brought us down here.”

SNP Properties entered the downtown market last September, snapping up three buildings on the same block at 5-7, 13-21 and 27-29 W. Broad St. for a total of $15 million.

A month later they closed on four small, contiguous parcels from 8 W. Marshall St. to 2 E. Marshall St. for about $2.8 million, where a five-story apartment building with two stories of underground parking is under construction to the tune of at least $25 million.

At the start of the year, the development firm launched a complete redo of the 102-unit West Broad Street Apartments at 17 W. Broad St., where it is adding stainless appliances, new washers and dryers, granite countertops, tile back splashes in the kitchen and new lighting to all of the units.

The building also will undergo exterior renovations, which includes a paint job and replacement of some of alleyway cobblestones.

“There are more professional people moving into the city, and given the location of this property, we felt it needed to be upgraded to attract those types of renters,” Phipps said. 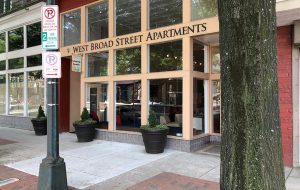 While they would not say how much they’re investing in the redo of the West Broad Street Apartments, Phipps said the firm is planning to rebrand the property The Walker at City Center – a tribute to the Maggie Lena Walker Memorial across the street and part of an overall rebranding of that section of the neighborhood the group is trying to launch.

“We’re calling the area City Center because of its access to everything,” Phipps said. “It’s between VCU and VCU Medical, it’s got BRT right in the heart of the area … it’s becoming the city’s center.”

At 13-15 W. Broad St., paper-filled windows mark the beginning of another future phase of SNP’s holdings, as work is beginning on a new restaurant in the long-vacant space.

Phipps and Smith said they’ve leased the 5,000 square feet of ground-floor space, but would not disclose any details about the concept or operator.

The restaurant is planning to open this fall, Phipps said. Ann Schweitzer Riley and Lori Markham, brokers with One South Commercial, represented SNP in that deal.

And the nearby crane towering across the street at 0 W. Marshall St. signals SNP’s largest investment in the neighborhood, as their five-story mixed-use development takes shape.

Dubbed Marshall at City Center, the project will include 166 apartment units and a 2,500-square-foot restaurant on the ground floor along West Marshall Street.

Phipps said seven of the units on the fifth floor will be two stories, with views of the city. Other amenities include a mezzanine on the roof, a pool, clubhouse, fitness center, and a two-story underground parking garage with 165 spaces.

“These are going to be shared amenities,” Phipps said. “Residents who live in The Walker will have access to pool, fitness center and parking garage in The Marshall.”

The duo is in talks with a local restaurateur to fill the commercial space that includes rooftop seating, but would not comment about the potential user or concept. 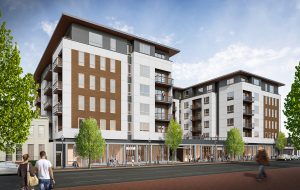 Rendering of The Marshall at City Center. (SNP)

Phipps and Smith are no strangers to the region or the development business.

Phipps, a Virginia Tech alumnus, moved to Richmond in 2004. His work for McCann Realty Partners took him to several fast-growing metros, like Dallas-Fort Worth, to oversee several development projects ranging from residential to mixed-use.

To build their portfolio at SNP, Smith and Phipps have tapped into network of private investors, including some locally.

As the urban core becomes more popular with developers, Phipps and Smith said they have their eyes set on two areas of the city: Jackson Ward and Scott’s Addition.

Phipps said they have one more deal in the works around Jackson Ward, but would not disclose any details.

“We want to do more deals down here because this is the heart of the city,” Phipps said. “When you look at the level of public and private investment, from VCU to [bus rapid transit], this area holds tremendous promise.”

Phipps has made some great investments and I like that he’s coining the term “City Center” for that area. Some big things are occurring there. Just before we sold the Marshall Adams Apartments on the corner, an low-bid investor told me that the new Marshall Apartments under construction next door would “bring down” the values of the properties around it! He couldn’t have been more wrong! The Marshall Apartments are another step forward in the renaissance of the City of Richmond.

Growth is great and all, but developers must maintain the charm that made Richmond popular in the first place. Too often they tear down the old to maximize profits. As Smith is a local “native”, I hope that he will be sensitive to that.

The “The Marshall at City Center” looks like a suburban piece of junk.