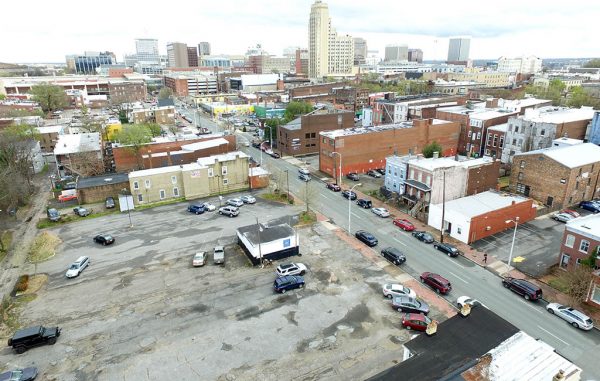 The Marshall Lofts are planned to rise in a parking lot at 2 W. Marshall St. (Kieran McQuilkin)

A newcomer to the local development scene is bringing some added height to a stretch of Marshall Street in Jackson Ward.

Eric Phipps’ EGP Properties LLC is under contract to purchase a nearly 1-acre parcel at 2 E. Marshall St., where it will build a five-story, 167-unit apartment project.

Phipps, who confirmed the pending deal last week, said this is his firm’s first large-scale development since launching earlier this year.

The $27 million Marshall Lofts will have five floors of apartments constructed above 4,000 square feet of street-level commercial space and ground-level parking, Phipps said. It also will have one level of underground parking, for a total of 165 spaces.

“We’re hoping to attract a retail tenant and a restaurant,” Phipps said.

He said the company expects to submit its development plan to the city this week.

Pending approval, Phipps said he hopes to close on the property and begin construction in August. The site spans four small, contiguous parcels from 8 W. Marshall St. to 2 E. Marshall St., owned by an affiliate of Richmond-based Genesis Properties. 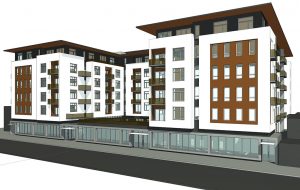 KBS Inc. has been tapped as the project’s general contractor. Walter Parks Architects is designing it.

Phipps said he has financing through Steven Walker with RPC Realty Capital LLC. Broker Tom Rosman of One South Commercial is representing Phipps in the deal.

About 80 percent of the apartment units will be studios and one-bedrooms, with the rest two-bedrooms. Amenities will include a courtyard with a pool and a fitness center, Phipps said.

The complex would add more density to an area of Jackson Ward that’s garnered increased interest from developers.

Up the street, Philadelphia-based Parkway Corp. purchased a 0.75-acre surface parking lot at 200 E. Marshall St. in November 2016 for $2 million, with potential plans to develop the site in the future.

Eggleston Plaza, a three-story mixed-used development near the intersection of Leigh and Second streets, is wrapping up. Plans call for the ground level to host Croaker’s Spot restaurant, with 31 apartments on the two upper levels.

Given the area’s continued growth, Phipps said the project will be in good company.

“This is a flight to quality instead of adaptive reuse, which Jackson Ward has a lot of at the moment.”

Great news! That area lost much residential density with the advent of the highway, the convention center, and blocks of cheap parking. It would be hard to get five stories approved in Historic Jackson Ward, this is right on the border. Surface parking on this block is a blight on first and second street, this project will inject much vitality into the area and support the eastward redevelopment of Broad Street.

An interesting project for sure! The underground parking level will be the first in the area for new apartments, and a good experiment to see if the rents can be achieved to pay for it. Congratulations to Genesis for assembling the site and selling it.