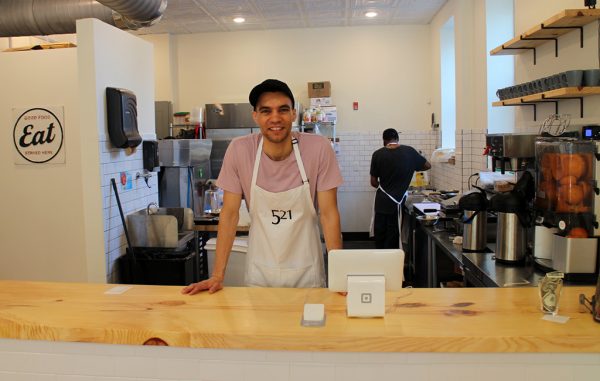 There’s a new option in the downtown breakfast scene.

Led by husband-and-wife duo Aaron Bond and Maria Jose Mejia Ruiz, 521 serves a gluten-free menu with classics like a bacon, egg and cheese biscuit, and waffles topped with cooked apples and cinnamon or stuffed with chocolate chips and coconut flakes.

Bond said the plan is to keep the menu rotating with regular specials. It also serves in-house squeezed orange juice and a house-blend coffee by local company Ironclad Coffee Roasters.

Bond said they’re hoping to be a breakfast and lunch spot for downtown workers for carryout and sit-down. The restaurant is open weekdays from 7 a.m. to 3 p.m. and Saturdays from 10 a.m. to 2 p.m.

Next door to 521 is another new eatery, Chicano’s Cocina Bar & Grill, which opened earlier this year.

The Centennial Building was redeveloped in 2016 by Guy Blundon’s CMB Development. It houses 24 apartments on its upper levels and Blundon has said he has a second phase planned for an eight-story building on an adjacent Sixth Street lot.

As a gluten sensitive eater, I love this concept! I look forward to getting in line for my gluten free biscuits. I’ve tried Chicano’s and its excellent. They might just have the best margarita in town!

This is THE best news I have heard all year. I will be there this weekend. I have so little options as a person living with Celiac. I will share this with all my friends, family and co-workers.