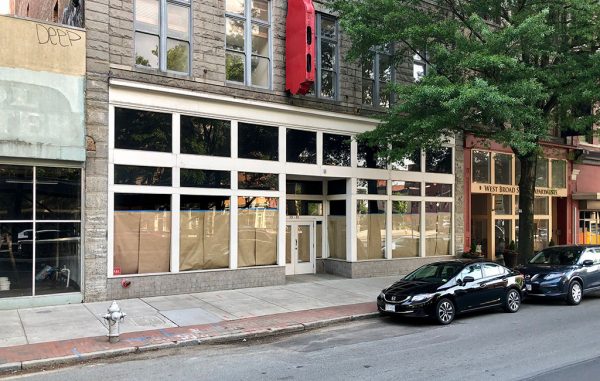 The group behind two downtown restaurants has a plan in place to revive a long-vacant Broad Street commercial space – and it’s teaming with a British pop star to make it happen.

LX Group, which operates Kabana Rooftop on the 20th floor of the Hampton Inn & Suites at 700 W. Main St. and the Belle restaurant in the hotel’s lobby, are working to establish a new restaurant and entertainment venue at 13-15 W. Broad St.

“There is still a lot in development,” Patel said. “We want to introduce something fresh and new to Richmond, and we’re looking at how best to roll out the concept … we want it to be entertaining and something special.”

The group is leasing the 5,000-square-foot location from SNP Properties, a relative newcomer to the downtown real estate market that purchased the building last September.

Run by business partners Eric Phipps and Bryan Smith, SNP also purchased 5-7 and 21-29 W. Broad St. on the same block for a total of $15 million.

Securing LX Group as a tenant is part of SNP’s plans to rejuvenate a surrounding two-block stretch the firm is branding “City Center” to attract more residents and businesses to Jackson and Monroe wards, including a new five-story, 166-unit apartment complex at 0 W. Marshall St. dubbed The Marshall at City Center.

While Patel would not disclose many details about the concepts in 13-15 W. Broad St., he said they also are looking to install a mezzanine area to host private parties and maximize dining space. PermitZip is doing the mechanical, electrical and plumbing drawings for the space.

They hope to open the venue by mid-fall.

LX Group also is planning a new venture down in Hampton’s Fort Monroe.