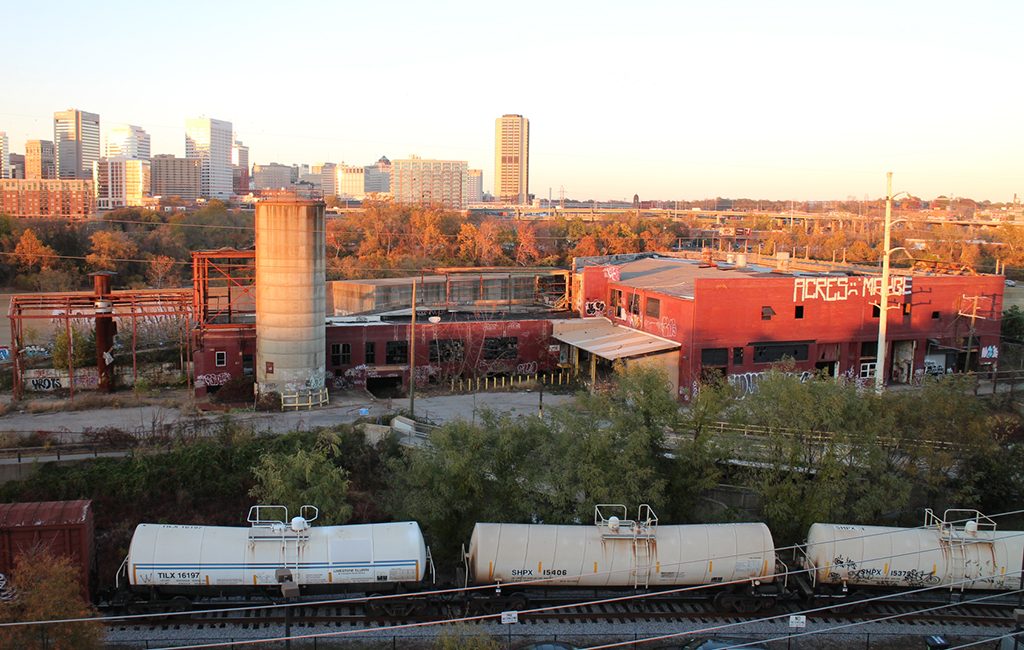 The planned site at 111 Hull St., on a quasi-island just west of the Mayo Bridge. The existing dilapidated building would be demolished to make way for a 14-story tower. (Jonathan Spiers)

After striking a deal with the city over access to the site, a local development firm is moving forward with plans to add two towers beside Manchester’s Mayo Bridge gateway.

Tom Papa, who runs Richmond-based Fountainhead Properties, has filed a development plan for a 14-story mixed-use tower – the first of two buildings planned for the 3.74-acre site of a former paper mill at 111 Hull St.

Papa, who parted ways with former business partner John Gregory earlier this year while retaining ownership of Fountainhead, is teaming up with WVS Cos.’ Richard Souter and Jason Vickers-Smith on the multi-phased, $100 million project, dubbed South Falls.

To be built on a quasi-island west of the Mayo Bridge alongside the James River floodwall, South Falls would consist of hundreds of apartments in a pair of towers to be completed in two phases, Papa said.

“This really is a beautiful site,” he said. “But there were challenges early on because of its location on the canal, and having to navigate city-owned property.”

Fountainhead secured rezoning for the property in November 2016 to accommodate the project, striking a deal with city leaders to replace an access-road bridge over Manchester Canal and pay for reconstruction of connector roads on the site. 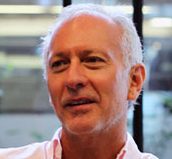 Called South Falls I, the first tower would include 256 apartments with river views in the 14-story, L-shaped building, according to plans filed with the city. It also will include 2,400 square feet of ground-level retail fronting the canal at the entryway of the development.

No plans for the second tower, South Falls II, have been filed. Papa estimates that building could total 225 apartments.

“If there is a lot of preleasing before the first building is done, then we would look into starting construction on the second building,” Papa said.

The project’s first phase would include 279 parking spaces in a parking garage and surface lot between the two towers.

Work on replacing the access bridge over the canal is set to commence this summer, Papa said. Once the new bridge is in place, demolition would begin on derelict, graffiti-tagged buildings on the site, and work on the tower could begin by late fall.

The project would take 15 to 18 months to complete.

Richmond-based KBS Inc. is the general contractor for South Falls I. Walter Parks Architects is designing the building.

South Falls I adds to a growing list of developments that Fountainhead and WVS have underway across the city.

Across Hull Street near the Southern States silos on Manchester Road, the team has nearly 4 acres under contract for another mixed-use development that could bring 200 more apartments to the area.

The two firms are also behind a $58 million, 12-story apartment building under construction at 1001 E. Byrd St., on a 1.2-acre site between WVS’s Locks development and Riverfront Plaza. They also are working together on a 105-unit apartment building at West Grace Street and Stuart Circle that will replace a parking lot behind St. John’s United Church of Christ.

Meanwhile, Gregory’s Lynx Ventures is readying a 2-acre surface lot at 400 Hull St. for a $50 million to $60 million mixed-use development dubbed The Current.

Construction on The Current is slated for the fall.

Papa, who has worked for years to secure the parcel for South Falls, said the initial stage of the project will help create a gateway for Manchester.

“It really is a beacon to the neighborhood,” Papa said. “This is a project we feel is definitely going to change how people see Manchester.”

So, what will it be: a 16-story tower or a 14-story tower? The photo caption says 16 stories, but the text in the article says 14 stories. I’m hoping for 16 stories – that was the original plan and will be disappointed to lose 2 of those stories. Excited to see a rendering though. Hopefully, Walter Parks won’t disappoint this time.

Eric, it may be referring to the number of apartment stories (12 or 14) above the parking podium(2). Walter Parks does an outstanding job of blending the old and the new. Several of his contemporary designs in Shockoe which once seemed out of place have now blended in so well that they appear to have been there for 50 years. Walter knows his stuff. He always delivers.

That may be the case for Shockoe Bottom, but their latest design of the 12-story “cube” (that’s what I call it) at the Locks is just hideous. That, of course, is my opinion, but there are many others who share that same point of view. That design looks way out of place in the middle of the financial district of downtown! It also should have been taller considering the surrounding towers of the financial district…just not very awe-inspiring (kind of a let-down, actually).

Disappointingly, it looks like they edited the captions to 14 stories now. They must have just reused the old images and missed the variance. Still better than the usual ten!

Height is the operative word these days. Purcell broke open the market with The Terraces and is repeating the formula with his newest concept and business partner Guy Blundon on South Canal. Papa is involved in several towers of course, and then there is the 2nd phase of PortRVA, the Property Result 12 story tower on the 600 block of Hull Street, and another planned at Lee Bridge. Everyone wants a piece of the “top” of the Richmond rental market. Lets hope the growth holds up and Everyone succeeds. We need the density.

This is not necessarily about razing the building on this site, but I have a request: Would bizsense consider avoiding phrases like “the existing dilapidated building would be demolished.” “Dilapidated” seems to me to be loaded language and implies that the building described isn’t worth saving, or couldn’t be reused, restored or incorporated. With RVA’s older buildings facing demolition with regularity, I think bizsense would do its readers a favor by being mindful of the trend. At one point the Jefferson and the capitol could have been dismissed in exactly that way. How old is the building in question? What… Read more »

Dennis you’ve obviously never been inside that building. Calling it “Dilipadated” is being extremely generous. Post-apocalyptic industrial disaster area would be more accurate. There are massive walls and roof sections missing, damage to structural components when machinery was removed, and essentially nothing worth saving. If you tried to preserve this building it would be so expensive to do no one would ever touch it. This project is a great thing for the neighborhood.

The issue is an apparent lack of objectivity. Richmond Biz Sense routinely refers to certain properties as “long abandoned”, “largely derelict”, “aging”, “crumbling”, etc. Whether intentional or not, this gives the impression of a bias and gives the appearance of pandering to certain parties, such as developers.

Yes, Abby, that’s it exactly. My comments weren’t necessarily about this building that is slated for demolition (Bob is right – I only know what I can make out in the small photo).

My larger point was that the cutline for this story is typical of loaded language used regularly by bizsense. I think they do a fine job in general, but they hurt their credibility in this regard.

Could someone explain what it means that some units will be “set aside” for low income renters? Does that mean the rent is reduced? Or charging the same rent per SF but with tiny apartments?

Stuart, it is my understanding that this is done to allow for financing benefits. It may allow for better rates from different financial backers based on income (i.e., the lower rent units are financed by lender A, and the higher units are financed by Lender B). It is not uncommon these days. I think the spaces are similar, just the rent is reduced. There are other benefits to the tenants and neighborhood in general by financial diversity in the neighborhood. (All of my info is based on a seminar I sat in by the Urban Land Institute a few years… Read more »

If your going to be renting an apartment at almost 2 grand a month, why not buy a house? Even splitting it at a grand. Who works where that can afford these places??