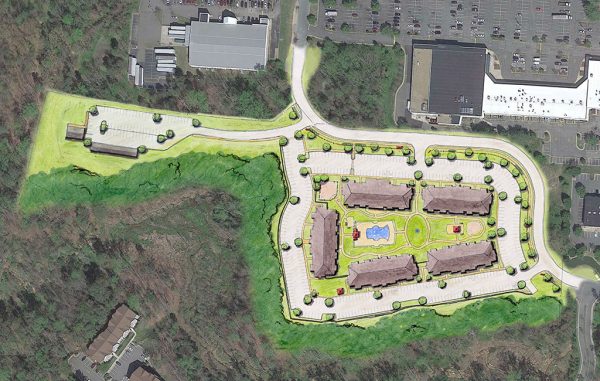 A site plan shows the five apartment buildings enclosing the courtyard area and a separated maintenance facility on the left. (Courtesy Larry Shaia)

Larry Shaia is on a roll in Hanover County.

Less than two years after moving in residents at Charleston Ridge, the 137-unit apartment complex that was one of the first multifamily projects approved in the county in more than a decade, the local developer is digging in on his next community: the 207-unit Cambridge Square Apartments in Mechanicsville.

Construction is set to start next month on the $36 million project, which will fill half of a 21-acre site at 7125 Brandy Run Drive, behind the Goodwill store and Food Lion-anchored Brandy Hill Plaza shopping center on Mechanicsville Turnpike.

Shaia, whose Charter Realty and Development Co. also developed the Charter Creek Apartments and several shopping centers in the King’s Charter area, said Cambridge Square will be similar to Charleston Ridge, with elevator access, a clubhouse, a pool and a fitness center – but with a new detail added to the mix.

“The big attraction that I’m real excited about is the courtyard,” he said, referring to an area to be enclosed by the complex’s five buildings with an exercise trail, grilling stations and a playground accessed via the buildings.

“Everything is contained in the courtyard, and it creates this community so you know who your neighbor is,” Shaia said.

He purchased the land in November for $1.26 million after securing county zoning approval. The land was previously owned by an entity tied to Menin Development Cos., according to Hanover property records.

Shaia is working with TowneBank to finance the project, which involves some of the same firms that were behind Charleston Ridge, including Purcell Construction as the builder, Winks Snowa Architects and Townes Site Engineering. Joining the group for Cambridge Square are Wendel/Evolve Architecture, which is designing the interiors, and Cite Design, which is handling landscape design. 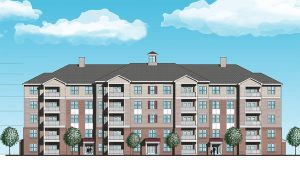 The cluster of four- and five-story buildings will consist of 47 one-bedroom units, 114 two-bedrooms and 46 three-bedrooms. Shaia said the majority of units will have views of adjacent wetlands in addition to the courtyard.

Construction is slated to finish by the end of 2019, though Shaia said he is aiming for completion by next September, weather permitting.

“We’re doing a $750,000 renovation in Charter Creek just in amenities, adding garages, a clubhouse, a pavilion and playground and dog park – all because of the demand for Charleston Ridge, which is a block away,” he said. “We created a demand, and now we’ve got to meet that demand and make Charter Creek as nice as Charleston Ridge.”

Other recent additions to the local apartment scene include 2000 West Creek, a 373-unit complex in West Creek Business Park; East 51 at Rocketts Landing, a 156-unit building under construction; and James River at Stony Point, a 280-unit complex beside Stony Point Fashion Park.

congrats to Larry Shaia, Hanover County’s most successful apartment developer. Of course, as he points out, he’s the only one! Hanover has been stifling density in its service areas far too long under the fear of the “youth gangs” mantra, as though they’ll exist in apartment communities that rentin excess of $1000 per month. For one bedroom. This site is a natural for apartment construction, but there are many others that fit the bill in a county that has the highest average rental costs and lowest vacancy rates in the region. Fewer than 10%’of these new apartments have school aged… Read more »

But who cares about the added montrosity of traffic that this will bring to an already jam packed intersection anyways. You must not drive/live around this area and don’t have to fight the constant traffic. 360 and Pole Green Roads are a drivers nightmare. Proffers towards roads?……this is a gemmick for the Board and Planning Commision to okay this mess.

I can’t argue with that Daniel. The Mechanicsville area roads were built to follow the trails the Natives made on their hunts, then paved, then widened. Never properly planned in a grid pattern. The suburbs are all cul de sac PUDs, dumping all the traffic into the same morass. Everything is automobile oriented. This particular community will be adjacent to a shopping center, at least providing some walk-ability to services without getting into a car, and the merchants with new prosperous customers. . Those are the locations to consider for apartment construction.

Not a perfect project, but any effort to add density to my car-burdened hometown is welcome. The county needs to do its part to add pedestrian accessibility to 360 and its adjoining streets. This project should be able to capitalize on its relativity to grocery store(s), public schools, the library, and restaurants, but why should driving 1000 feet be safer than walking 1000 feet?
And this ought to make DRPT’s Greater RVA Regional Transit Vision Plan all the more feasible. You want less traffic? Build density, invest in transit.