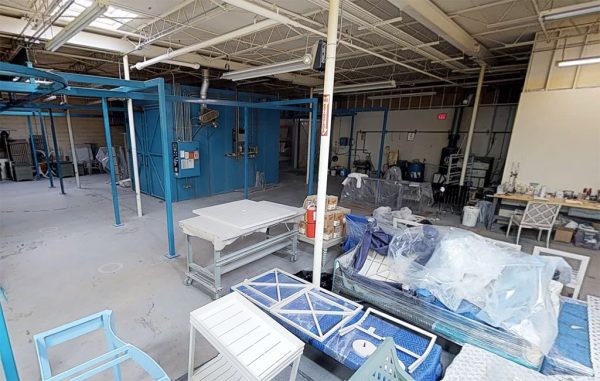 One of the company’s scans of an ongoing development. (RoomTrotter)

What started as a cure for a workflow headache for his construction drawing startup has blossomed into another new business venture for Kenny Shultz.

Shultz is a co-founder of PermitZIP, an engineering firm specializing in mechanical, electrical and plumbing drawings for small real estate developments.

Founded in 2015, PermitZIP’s promise is that it will deliver drawings on projects 20,000 square feet or less within two weeks, or they’re free.

But Shultz said a common issue for PermitZIP, which is based in Scott’s Addition, was providing a consistent visualization of a space between the engineers to the design team.

In lieu of taking 1,000 photos of the buildings along the way, he bought a 3-D scanner for PermitZIP to create images and renderings of the buildings’ interiors, allowing users to walk through and rotate akin to Google Street View.

After some early success using the scanner, Shultz realized it was too time-intensive to have his staff spend hours collecting the scans.

“I thought, ‘Alright what if I had a company that provided this to me at a price that I could afford?’” Shultz said.

So he took matters into his own hands and created that company. In early April, Shultz launched RoomTrotter.

To get the company off the ground, Shultz bought three more scanners and began hiring independent contractors to go out into the field and perform the scans.

He said the 3-D models RoomTrotter offers are accurate within an inch of the actual spatial data, a luxury typically only big projects are afforded.

“For the small stuff we do, it’s perfect. It’s reliable enough to make good construction decisions,” Shultz said. “If you need something down to an inch, you might need to go field-measure it, but it’s extremely valuable data.”

In addition to the 3-D scans, RoomTrotter also creates point clouds, a collection of data points in a specific space that Shultz said is helpful for architects.

He’s keeping with the theme of simplicity with RoomTrotter as he has with PermitZip, offering scans at 5 cents per square foot with a $150 minimum.

“I see the whole small projects market as a massive opportunity, and RoomTrotter fits in that. I wanted to make it at a rate that people could afford and use on a repeat basis for each project,” Shultz said.

Thus far, RoomTrotter has done scans for upcoming projects such as The Spur and 1806 Summit.

“Trots,” as Shultz describes them, are booked through an online app that sends the appointment out to all of its workers, who then pick up the work.

RoomTrotter has four scanners with plans to double that number, and aims to have about 20 independent workers by summer’s end. Shultz said he received a small angel investment to kick off RoomTrotter and has been getting courted by other investors.

Shultz also has plans to grow PermitZIP beyond just the Richmond market and aims to establish franchises of the concept nationally. He said he sees the addition of RoomTrotter for all PermitZIP projects as a potential catalyst for that growth.

“The problem with (small projects) is you don’t have as many resources, and you don’t know what the price is going to be. Now we’re just breaking it down. This is a service that only big projects could afford previously,” he said.