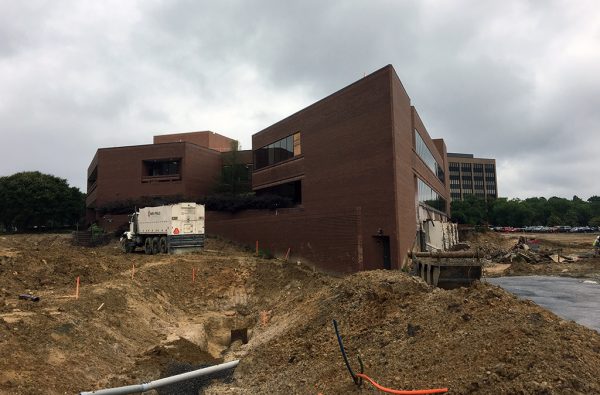 The building and its surrounding parcel are under heavy construction.

The gutting of a once-troubled West Broad Street office building is in full swing, as its new owner readies it for a slate of new tenants that have already signed on.

Jimmy Stanley and Henry Shield of development firm Stanley Shield are giving the Brookfield Commons office building at 6600 W. Broad St. in Henrico County a reboot after years of waning occupancy rates and a brush with foreclosure.

Stanley and Shield purchased the three-story, 94,800-square-foot building and surrounding 6.8 acres in December 2016 for $3 million. They’ve since landed three tenants that will fill all but about 18,000 square feet. 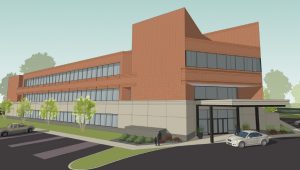 A rendering of the expected finished product.

Pulmonary Associates of Richmond has signed on to take the entire 32,000-square-foot third floor, while Virginia Women’s Center is set to occupy all 25,500 square feet of the first level, Stanley said.

That leaves about 17,700 square feet on the second floor available for lease, Stanley said.

There’s also a new construction component to the plan, as work will begin this fall on a new stand-alone one-story, 7,000-square-foot medical office building on the property at the corner of Dickens Road and West Broad Street. That will bring the Brookfield Commons campus to about 101,000 square feet.

Medical office is a change of use for Brookfield Commons, which was constructed in 1977 and first served as an office for an insurance company. The complex housed multiple office users through the years, including the University of Phoenix and the Virginia Department of Transportation.

After Brookfield Commons teetered on foreclosure in 2013, special servicer C-III Asset Management took over the building following the loss of two large tenants, eventually selling the distressed asset to Stanley.

Once the existing office tenants had vacated, Stanley said work to overhaul the facility began during the third quarter of 2017.

The work includes a new roof, new electrical wiring and plumbing, along with significant exterior work that includes excavating the lower half of the building to expose the basement portion of the facility at street level.

Stanley would not disclose the renovations cost.

Stanley said the first tenants are slated to move into their space by mid-November.

“There is a need for medical space in this area,” he said.

I had the privilege of meeting the developers yesterday at Mekong Restaurant. Its exciting to see new life pumped back into that building. The entire Glenside area seems to be revived as of late. There will be some exciting announcements coming soon regarding other properties in the area. Stay tuned!