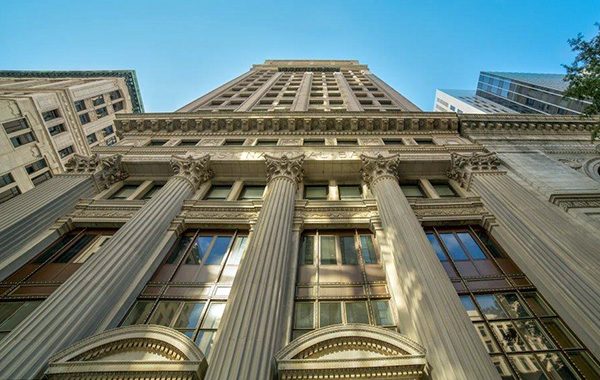 The First National Bank building at 823 E. Main St. sold after about 6 months on the market. (CBRE)

It’s the largest apartment acquisition price in Richmond in at least five years, according to city property records.

The building has 18 floors of residences, a six-story parking garage and a three-story annex building with 37 apartments. It most recently was assessed by the city for $26.6 million.

Rushmark purchased the property in 2000 for $9.5 million, investing $35 million to convert it into apartments. Renovations were completed in late 2012 with the help of historic tax credits.

The deal closed June 25. The property hit the market in January.

While Gates Hudson could not be reached for comment Monday afternoon, Cox said the firm is developing a plan to lease up nearly 6,000 square feet of retail/office space on the building’s ground-floor level.

The First National Bank building was constructed in 1913, its classical revival-style structure rising as one of the city’s tallest buildings at the time. The apartment conversion made it one of the largest apartment complexes in the city’s central business district.

Upon its sale, First National boasted a 96 percent occupancy rate, according to a marketing brochure. Average rent is $1,500 per month. The property also includes a 268-space parking garage that netted more than $500,000 in revenue in 2017.

An entity tied to Dalian Development, a Washington, D.C.-based company with a track record for large residential and mixed-use projects in dense areas, purchased the Party Perfect building at 3210 W. Marshall St. for $3.8 million in May.

“Richmond is on investors’ radar … creating a competitive marketplace that is driving pricing,” Cox said. “We’re seeing a lot of new buyers for every property we market.”