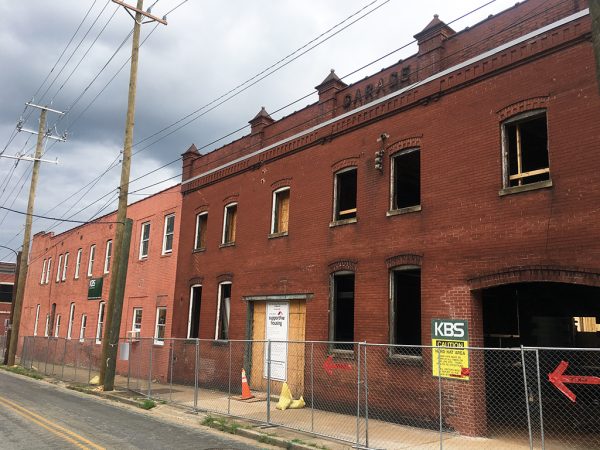 Virginia Supportive Housing is renovating the 123-year-old building to add apartment units for the homeless.

The project will nearly double the building’s footprint and number of apartments from 47 to 80. It is also adding a semi-underground parking structure with 26 spaces.

A rendering of the finished product. Courtesy Johannas Design Group.

The nonprofit, which focuses on alleviating homelessness by providing permanent housing and other support services, announced plans to renovate and expand the building at the corner of West Clay and North Harrison streets in 2015.

VSH has provided housing in the building, which it previously leased, for 27 years. It purchased the building and roughly half-acre parcel for $479,000, per city property records.

Executive Director Allison Bogdanovic said the purchase cleared the way for the expansion, construction for which began in January.

“We pretty much took it down to the shell. It really ended up almost being an adaptive reuse,” Bogdanovic said. “The old apartments were very small, but now they’ll be 350 square feet with full kitchens and bathrooms. It’s sort of like a whole new apartment building.”

Once completed, New Clay House will have roughly doubled in size to 35,000 square feet. VSH razed an old warehouse located behind the building and is building the parking structure on an old parking lot.

Bogdanovic said the project budget rose from $12 million to $19 million due to additional costs associated with the parking structure, utilities and other work to preserve the 123-year-old building.

VSH is funding the project through a variety of sources, including loans from the Virginia Housing Development Authority, historic preservation and solar tax credits, private donors and foundations, and city grants.

Bogdanovic said they’re aiming to complete the building by year-end and have residents move in during the first quarter of 2019. In addition to housing for VSH residents, the building will have several apartments with rents below 30 percent of a tenant’s annual income.

Local firms KBS and Johannas Design Group are the general contractor and architect on the project, respectively.

VSH operates 650 housing units throughout the state, 160 of which are in Richmond, and serves about 1,500 individuals each year. The nonprofit posted $9 million in revenue on its most recent tax forms, per nonprofit database GuideStar.

Beautiful. Grateful to see forces work together to help those in true need. And close to a grocery store… nice. Wishing much success!

I have a friend on disability. He’s been homeless for months, sleeping in his car. He believes he may never be able to have an apartment again. I don’t know the nature of his disability or what he COULD afford, but would like to get him in touch with the right people that can help. Who should I get him in contact with?