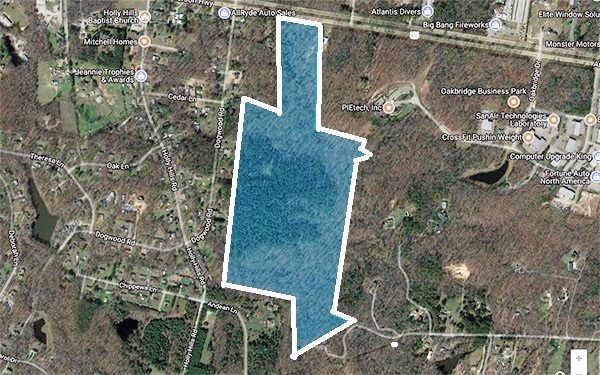 The highlighted area is the land that was just sold and is slated for development.

A global land development company based in Canada is entering the local market with a deal in Powhatan County that could result in hundreds of new homes.

Calgary-based Walton Global Investments closed Friday on its purchase of a 74-acre tract on the south side of U.S. 60 between the Holly Hills area and Oakbridge Business Park, about a mile west of Windy Hill Sports Complex and Westchester Commons.

The purchase price was $1.15 million, said Randy Cosby, a broker with Commonwealth Commercial who worked the deal with colleague Chris Jenkins.

The transaction had not been recorded with the county assessor’s office as of Tuesday. The latest county assessment valued the land at $926,000, according to Powhatan property records.

Cosby said he has plans for the Powhatan property, and that development could include as many as 300 homes with a variety of types, including townhomes and single-family houses. He said the county’s land-use plan also calls for a commercial component, and the development would include walking trails and parks.

Cosby said the deal is the first in the Richmond area for Walton, a privately owned company with corporate offices in Phoenix, Germany, Hong Kong and Singapore. The company’s developments include residential and mixed-use communities in Canada and in the Carolinas, Florida, Maryland and Texas.

Commonwealth Commercial represented the sellers of the land, Mary and Jean Brydon, who acquired it in 2009 through a $1 million transaction, property records show. Cosby said Brydon’s family owned the tract for decades.

He said the land had been under contract about a decade ago but a sale never occurred due to the economic downturn. He said the family had pursued rezoning before and listed the land four months ago with Commonwealth Commercial, which identified Walton as a prospective buyer.

“They had been through the ringer on the rezoning process,” Cosby said of the sellers. “We were able to find a buyer that has looked in the Richmond market but hasn’t made any purchases yet. They were willing to close prior to rezoning, so that shortened the timeframe a lot and took a lot of the risk out for the seller.”

Cosby said the land will need to be rezoned to accommodate Walton’s project. He said a timeframe for rezoning and potential development has not been set.

“They’re going to work collaboratively with the county until they get to what they feel like is a well-received plan by the community, and then they’re going to go forward with the rezoning,” Cosby said. “They are pushing to make that happen as quickly as possible.”

Some of Walton’s other projects listed on its website appear to blend rural land use with suburban development. In Maryland, a 342-acre residential community called Canter Creek calls for 50 percent of the land to be preserved as open space and includes a 25-acre park. In the Carolinas, Walton’s Bonterra Village mixed-use community southeast of Charlotte includes horse stables, pastures and trails.

Cosby said the Powhatan development likely would be the largest residential community in the county. He said the only comparable development he is aware of in Powhatan is Casey Sowers’ Winterfield Place, which calls for just over 200 homes and 75,000 square feet of commercial space on 50 acres that straddle the Powhatan-Chesterfield county line.

The Powhatan property is in the vicinity of new development in neighboring Chesterfield, including East West Communities’ Hallsley community to the southwest.