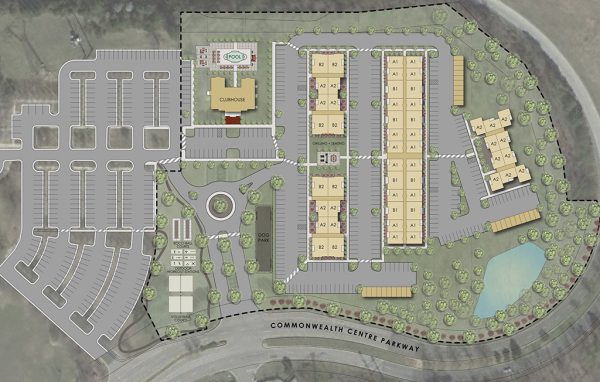 After launching several projects in Midlothian, a local apartment developer is branching out into Chesterfield County’s Brandermill area for his latest deal.

“When you think of the number of rooftops being added nearby, along with the area’s strong commercial growth, it was ideal for apartment development,” Blundon said.

CMB is under contract to purchase the land from Richmond-based construction firm EDC, which has owned the property since 2001, according to county property records.

Accustomed to doing deals in the county’s Midlothian section, this is Blundon’s first development in the Brandermill section, which is undergoing a wave of new multifamily and single-family development.

“We’ve been very active in Midlothian for years,” Blundon said, touting his 120-unit The Atlantic at Charter Colony age-restricted apartment development completed in 2006; and the 320-unit The Park at Salisbury apartments that was completed in 2004.

Dubbed Commonwealth Apartments, plans call for the construction of four apartment buildings, which will vary in height due to the topographical grade of the property.

“There’s going to be a four-story and three-story building, and another set of two buildings that’s going to be four and five stories and include elevators,” Blundon said. “We want to be able to offer a diverse set of housing on the site.”

Other site amenities include a 5,000-square-foot clubhouse with a pool, volleyball and bocce ball courts, 30 garages for enclosed residential parking and a dog park. Blundon added the development will also include several trails, with plans to tie them into the area’s pedestrian network.

“The idea is to have residents walk or bike to the movies or to the bowling alley which is all nearby,” Blundon said.

Roughly 60 percent of the proposed 240 units will be one-bedroom, Blundon said. The remaining units are slated to be two bedrooms.

Construction on Commonwealth Apartments is slated to begin in spring 2019 after the closing of the land purchase. Bruce Milam, a broker with Colliers International, is handling the pending transaction.

Purcell Construction is the general contractor, while Poole & Poole Architecture is designing the apartment project. Towne Engineering is the civil engineer.

Once completed, Newport News-based Drucker & Falk will manage and lease the property.

The site falls within one of the county’s regional mixed-use designation areas, which, since 1987, has called for corporate office, commercial, light industrial/research and development and higher density residential uses.

Chesterfield Board of Supervisors approved amending the vicinity’s 152-acre regional mixed-use plan to accommodate the apartment development at its June 27 meeting.

The remaining properties within the mixed-use area, which includes the Target-anchored Commonwealth Center shopping plaza, Regal Cinemas and Uptown Alley, were not affected by EDC’s request.

Commonwealth Apartments adds to CMB’s growing multifamily count across the region and state.

Blundon is under contract to purchase 2801, 2823, 2825 E. Main St. near the foot of Libby Hill for a 144-unit apartment development that includes about 4,000 square feet of commercial space.

Work is also wrapping up on CMB’s final phase of the Campus View, a 736-bed, 15 building student housing development in Harrisonburg, where once completed, will be 100 percent occupied and cost $50 million.

“We’re completing the final three buildings of the 15, and will have them fully leased by the fall semester for students,” Blundon said. “It’s been a 4-year project.”

In Manchester, work is wrapping up on Blundon’s 10-story River’s Edge residential tower at City View Landing. He said that project – another collaboration with Purcell – is moving in its first tenants.

Blundon and Purcell also teamed up on The Winterfield at Midlothian apartments, a 238-unit complex beside Blackwood Development’s Winterfield Crossing along Midlothian Turnpike.

it’s been a pleasure for Austin Newman, my colleague at Colliers, and me to work with Guy Blundon and Tom Eilerson on this Commonwealth Center site. It’s a property that just begged to be rezoned for apartments to take advantage of its access and proximity to retail and entertainment. Congratulations to everyone who have had a role in its design and approval by the County.

Why are you congratulating developers and a design that is 150′ from an interstate? That means housing, pool and clubhouse has consistent noise of cars at 60+ mph. I see no sound barrier in that design, also betting these apartment walls will not have the sufficient insulation to keep out the drone of cars whizzing by either. Article quotes “The idea is to have residents walk or bike to the movies or to the bowling alley which is all nearby,” Blundon said. This location doesn’t promote connecting to the retail, movies, or bowling, because absolutely NO sidewalks around! So people… Read more »

Erick, its sound urban planning to place intense traffic uses as close to highways as possible, with less intense uses such as single family homes further from the highway. This site is tucked into the slip ramp of Route 288 connecting it to retail and entertainment uses, which really are only a short walk away, but the builder can’t dictate that residents walk, ride a bike or drive their car. As for noise attenuation, that will be dictated by the builder, who has a very good sense of the market. If he fails to deliver proper sound insulation, his rents… Read more »

Bruce, I disagree with this being sound urban planning, but there is no need to go into why I think this. But you are right, I am not in “this business”, but as a Structural Engineer, I know a flawed design when I see it, but as a member of the public, you do not need a degree in urban planning to know it is flawed, use your eyes and head. Also it’s laughable to answer in a way of “if you do not like it, do it yourself”, no that’s not how it works in the real world. As… Read more »

Erik, ever wonder if someone who is investing millions of dollars thinks about all the issues before moving forward?

Oh I know they have thought about these issues, but that doesn’t change their minds, they care about the profits, which making a profit is not bad, but the bad, is they are not creating a community that the area and it’s people can thrive in and sustain a life in that location. So Guy’s comment of ““The idea is to have residents walk or bike to the movies or to the bowling alley which is all nearby”, is just smoke he is blowing to the public, the design presented proves otherwise.

What am I missing? They can walk or bike to the adjacent development without setting foot on the public road (which is 35 mph). Also keep in mind that the exhibit included in the article is schematic. There will be plenty of required features that do not show up on this plan.

The main issue I see with this new apartment complex is the traffic. There are already numerous accidents (due to poor initial concepts) with the increased foot and auto traffic this is going to be a logistic nightmare. You can’t widen 360 anymore, with the weekly accidents on both the 360 exit off 288 and within the shopping area, this is just a complete joke for the neighboring communities. This again just shows Chesterfield’s poor judgement in lieu of contractor dollars. Think of Short Pump Broad St exit etc. on steroids.

Stuart, while I appreciate your points, I’d just note that the details of the road geometry and traffic capacities are under the review of VDOT. The county does let the state know what priorities they have in their 6 year plan. I know they are beginning a project to extend turn lanes (heading east on 288) now to help with the congestion at the Hull Street Road interchange. On the other hand, zoning and land use falls entirely on the county

I completely understand the 6 year plans, etc. However, point is you can’t create new land, only acquire existing and there is not much of that left to create the necessary changes to compensate the increased traffic.

Stuart, I know this won’t sound right, so I’ll apologize now. I mean no harm. All roads and improvements are built by buying land. Once the need is there, the government can buy or take the land for an allegedly fair price. Think about the Downtown Expressway. There were many homes that were demolished. The need outweighed the housing at that time (apparently).

There are new designs that help minimize highway footprints and/or move traffic (think roundabouts) that help, but it almost always becomes a battle over land-use and access.

Completely understand as I worked in that industry for many years. My point is that there is no more land for that particular area to maneuver the correct or necessary improvements to ease congestion that already exists. So by throwing this additional construction, more people, etc. into an already disaster of planning is just bad. Again, they had years to plan Short Pump and look at that nightmare. This is simply Short Pump 2.0. You look further down Charter Colony and there is more going to be added there as well without much thought given to that major cut through.… Read more »

Fortunately, Erik, this country was built by men and women who believed in their ability to “create a better mousetrap” and did not find that challenge “laughable”. I feel lucky to have many of those individuals, including Guy Blundon and Tom Eilerson, as my clients and friends. As a structural engineer, you obviously can see a lot in a schematic footprint, including noise attenuation, structural integrity, and even the future of community sustainability. I’ll be glad to pass along your name to Poole&Poole Architects as a resource.

This smells like the latest apartments that went in at the failing Stony Point Mall It was touted as “walk, live and eat” at the mall. Great community living. It was nothing but a money grab for a small piece of undeveloped land The reality of the development was , its directly under high voltage power lines(which every health organization in the world agrees they pump out EMFs), Cherokee road residents were upset the developer went back on a deal they agreed not to develop, and the walkers have to play frogger to get to the mall or they are… Read more »