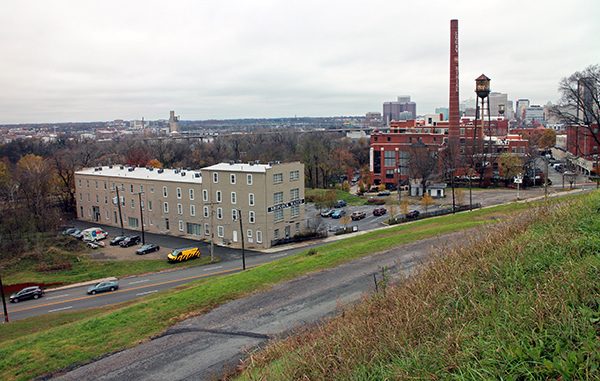 The properties as viewed from Libby Hill.

A years-in-the-making apartment building planned near the foot of Libby Hill is inching closer to construction, with a new developer signed on to see the project through.

Conceptual plans for a five-story complex at the corner of East Main and Pear streets have been submitted to the city, though those plans could be modified as a result of a pending deal between the site’s current owner, Shockoe Bottom-based Historic Housing, and Guy Blundon of CMB Development.

Blundon is under contract to purchase the property, along with two neighboring parcels that also front Main Street, from Historic Housing’s Louis Salomonsky and David White, who secured zoning for the project last year after a previous proposal for a 13-story condo tower was withdrawn due to concerns from area residents.

The three adjacent parcels – 2801, 2823 and 2825 E. Main St. – include the existing Shiplock Watch apartments building and a triangular-shaped parcel near the intersection of Main and Williamsburg Road that’s planned to be developed as landscaped parking.

Blundon said the deal, which is scheduled to close in the third quarter this year, came to him by way of Bruce Milam with Colliers International. Milam said Salomonsky expressed interest, during a meeting, in selling the properties but did not want a broad listing, prompting Milam to reach out to Blundon.

A preliminary rendering of the planned apartments as viewed from the west.

Blundon said he was interested in the properties for their location between the Bottom and Rocketts Landing. He also noted their location on the recently opened GRTC Pulse bus rapid transit line and proximity to the Virginia Capital Trail and Great Shiplock Park.

“It’s right in the path of development, right at the east end of Cary Street and Shockoe Bottom,” Blundon said. “Going out toward Rocketts Landing, development is moving that way. There are some exciting things going on out there. It’s got great views.”

The sale price won’t be known until the deal closes later this year. The three properties are collectively valued at $7.2 million, according to assessment figures on city property records.

Blundon said he intends to develop the new apartments and landscaped parking generally in keeping with designs put forth by Historic Housing, but with some adjustments to the number of units and architectural details. The building’s five-story height would not change, he said.

The conceptual plans submitted to the city include preliminary designs by Salomonsky’s SWA Architects that show a five-story building on the Main Street side with structured parking underneath as the property slopes down toward the river.

The plans call for a total of 144 units and 134 parking spaces, with a pool deck on the river side and a 4,000-square-foot commons building with fitness center and laundry room. Proffers included with last year’s rezoning required a minimum of one parking space and one window per apartment, and a building façade predominantly made of glass and brick.

Salomonsky said the design and five-story height came about through discussions with city planning staff and Church Hill’s neighborhood association, which wanted to preserve views of the river from the top of Libby Hill. He said Blundon has likewise met with the association and plans to maintain the general design.

“I’m very happy with what was created,” Salomonsky said. “Guy Blundon loves it too, and we’re delighted he’s stepping in.”

Blundon said the units would be primarily one-bedroom floor plans, and the number of apartments and the building design would change slightly as plans become more detailed. He’s working with Walter Parks Architects on the design, with Purcell Construction on board to build the apartments.

HG Design Studio is designing the landscaped parking, which will fill the parcel on the other side of the Shiplock Watch building. The surface parking would add 70 spaces with landscaped tree islands and a gazebo, Blundon said.

Blundon put the cost of the new apartment building at just below $30 million. He said he hopes to break ground in early 2019.

The property is across Pear Street from the site of another planned condo tower that developers David Johannas, Jerry Peters and Howard Kellman pulled the plug on last year. White still owns that 0.3-acre parcel, which is listed for sale by One South Commercial with a $1.3 million price tag.

“We like that parcel, but that’s not part of the deal right now,” he said.

Blundon’s other projects in town include the 10-story River’s Edge residential tower at City View Landing across the river in Manchester. He said that project, likewise a collaboration with Purcell, is moving in its first tenants.

Blundon and Purcell also teamed up on The Winterfield at Midlothian apartments, a 238-unit complex beside Blackwood Development’s Winterfield Crossing along Midlothian Turnpike.

I’d like to weigh in on this. Despite the developers assertions, like the previous proposals no mention of how tall this building actually is? The previous developments height was erroneous and so is this one. Blocking the historic view shed from Libbie Park is completely un acceptable to me and should be to anyone that cares about Church Hill or this City’s History.

Josh, the Libby Hill view to the east which is the historic one will be protected by a scenic easement. The land east of the existing apartments will be developed with surface parking only. Only low lying trees will be allowed within the surface lot. Louis and Guy met with community leaders on the Hill to discuss the developments restrictions.

The Multifamily team from Colliers is pleased to have been instrumental in this transition of developers.

Thank you for your communication. I do appreciate the developers modifying their original proposal. Unfortunely if not for a lot people including myself this project would have went ahead ufettered as orginially proposed and our historic view for which this City was named, would only be offered to the residents living in the proposed structure. The history and esthetics of the Church Hill community and Richmond are what I’m concerned with.