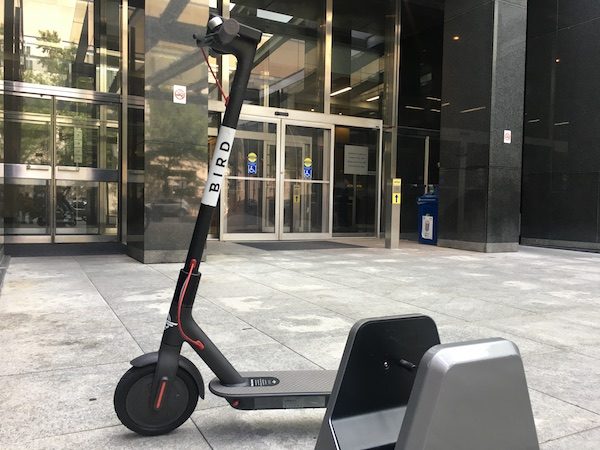 A controversial electric scooter startup has taken initial steps toward operating legally in the city, but will have to go through City Council before it can drop more of its vehicles on Richmond’s sidewalks. 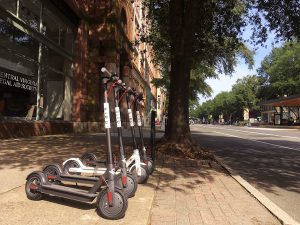 A quartet of Bird scooters along Broad Street. (Mike Platania)

Bird Rides Inc., a California-based company that last week brought a fleet of its on-demand, dockless scooters into Richmond unannounced only to have them seized by the city, met on Tuesday with officials from Mayor Levar Stoney’s office.

The two sides discussed the city rules and regulations that Bird violated during its overnight blitz last week, when it unleashed dozens of scooters.

City spokesman Tom Byrnes said the city told Bird on Tuesday that “City Council action and an ordinance will be required, along with the establishment of an appropriate permitting, legal and administrative review process, before any dockless scooter initiative can be considered.”

Bird could not be reached for comment by press time. 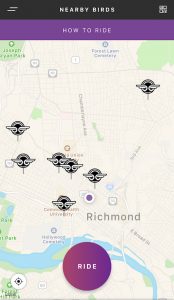 Byrnes added that the city won’t permit the operation of electric scooters by Bird or its competitors in the interim. The city has continued collecting the scooters since Thursday’s surprise launch, though a few stray Birds remain. As of press time, Bird’s app showed six available scooters scattered around the city.

The city said it considers placement or parking of any vehicles on the sidewalk to be in violation of City Code and that going forward, the city will utilize its towing contractor, Seibert’s Towing, to remove scooters illegally parked in the right-of-way.

“City officials will nevertheless work with Bird, Lime and any other motorized scooter company with an expressed interest in Richmond,” Byrnes said in an email.

Lime is a Bird competitor that also has shown interest in the Richmond market.

Councilwoman Kim Gray said on Tuesday that she’s been in contact with Bird and that she’s willing to sit down and work on an ordinance with the startup.

“(I) just don’t want the sidewalk to be littered and have tripping hazards, but I think there’s a healthy balance,” Gray said.

She added that she’s planning to look into what other localities have done to regulate the dockless scooters.

There are currently no scooter-related ordinances on the agendas for City Council’s next meetings on Sept. 10 and 24.

I think the electric scooter is a great idea around the VCU area but Bird needed to go about it the right way. I’m also not a fan of the ‘dockless’ system. Other municipalities are having issues with dockless bikes and such just being left all over their city on sidewalks and medians. Docking stations around town I feel would be a better solution but I know that companies like Bird don’t want to operate that way because it cost them a lot more to do business. It’ll be interesting to see where this all goes.

‘City Council action and an ordinance will be required, along with the establishment of an appropriate permitting, legal and administrative review process, before any dockless scooter initiative can be considered.’

Translation: ‘We might get this done about mid-February for Bird [Scooters], just in time for our second winter cold snap and snowstorm.’

Good article.
This begs the question: What is the City going to do about all of these dockless personal automobiles that litter the street– parking illegally in front of curb cuts, in bus lanes, in loading zones…? And their operators, who are often so inattentive that they actually kill people?
It’s easy to point at the new, yes, novelty thing and laugh; let’s not forget the context of our overall mobility infrastructure, and avoid double standards.

The ‘personal automobiles’ are parked in their docks. Those docks are called parking spaces. Those who don’t park in those ‘docks’ are ticketed/towed, just like these scooters.

I’m aware of the concept, but often see a lacking in execution. Look at any side street coming off of Main or Cary and you’ll often find vehicles parked illegally close to the intersection. This endangers pedestrians, scooterists, cyclists, and other drivers more than a wayward scooter ever might, but is typically overlooked in the public eye.

@Bert- I hate to participate in this example of “whataboutism,” but walk or drive through the city and count how many cars are parked too close to the intersections unticketed/untowed, creating very dangerous, low-visibility conditions for everyone (cars, bikes, pedestrians alike). It really does make this concern about a stray scooter being left on the sidewalk seem a bit overblown.

Looks like I should have refreshed the comments before I posted. Anyways, the point bears repeating.

Hey if y’all are fine with it then go ahead. I’ve been to other cities, like Phoenix, who’ve had to deal with the issue of discarded dockless bikes being left all over the place. The early love of that system turned into a big issue later but hey, maybe Richmond is different.

It’s not that I am fine with people haphazardly leaving scooters laying in the middle of the sidewalk. It’s that every time the issue of alternative transportation comes up (buses, bike lanes, scooters…), a very vocal portion of the population gets all up in arms about some sort of safety or convenience issue that pales in comparison to already existing car-related issues, such as cars parking too close to the intersection. I think there are probably ways to limit the amount of scooters that get dropped off irresponsibly without requiring docking stations. Yes, there will always be bad actors, but,… Read more »