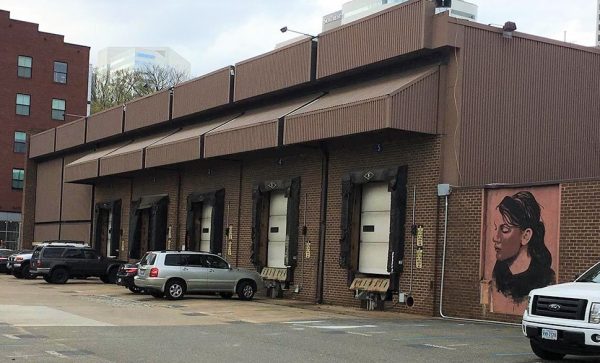 Access to this former warehouse space was the subject of a lawsuit between NFA and Margaret Fruend. (J. Elias O’Neal)

An unresolved dispute over a downtown alleyway has forced a local developer to scrap his plans for a 10-story hotel near Shockoe Slip.

Charles Macfarlane, principal of Richmond-based Macfarlane Partners LLC, said he’s eyeing land elsewhere in the city for the hotel he had hoped to build at 1300 E. Byrd St.

“We do not have the property under contract because of issues with Pope’s Alley,” Macfarlane said. “We could not proceed until the issue with the alleyway was settled.”

Pope’s Alley, which dates to 1884, is a 35-foot-wide private alley owned by North Falls Acquisitions LLC and 140 Virginia Street LLC.

The alley runs behind the two properties and connects them.

The neighbors turned to combatants when North Falls claimed Freund was preventing their access to portions of the alleyway. North Falls needed those impediments removed in order to be able to sell the property to Macfarlane.

Plans called for Macfarlane to scrap a 22,000-square-foot warehouse on the site and construct a 144-room Hyatt Place, including meeting and commercial space along Kanawha Canal, and a 111-space parking deck.

The hotel would have been accessible mainly via South 12th Street, according to a development plan filed with the city at the time. But its rear entrance would have been off Pope’s Alley, which runs behind the Lady Byrd Hat building on Virginia Street.

North Falls sued Freund in March 2017 to force her to remove multiple obstacles in the alleyway.

Freund denied North Falls’ claims, filing her own counterclaim in May 2017 that sought to retain control of her easements in the alley and to block rear access to the hotel. She argued that hotel patrons would overburden the alley with traffic and trespass on her portion.

The cases were tied up in Richmond Circuit Court for over a year before both sides voluntarily withdrew their claims this summer, but without resolving the dispute.

Macfarlane said his firm, which was not party to the lawsuit, is no longer under contract for the site, ending a negotiation that began in 2016.

“This was 1 1/2 years going on two years of planning,” Macfarlane said. “Part of our agreement with the city was to have the issues with the access to the alley resolved before we could move forward with the project … that just hasn’t happened.”

Disappointed, but determined to build the hotel elsewhere, Macfarlane said his team has identified another site “close to the river” that would be ideal for the project. He would not disclose the location.

He said his team would have to submit another development plan with the city’s planning division, adding that the hotel would be either a Hyatt Place or a Hyatt House hotel.

“Both are quality hotel brands that would perform well in that area,” Macfarlane said. “Right now, we’re just trying to regroup and see what may work for the area we’ve identified for the hotel site.”

Just build the hotel on top of the Locks “Tower” that they are building next to Riverside in the James! That will bring more height to the project which will make it look less out of place and hopefully rid itself of the ugly design it currently has. Easy. Done. That’s what they should have done from very the start!

Can they still make adjustments to the Locks Tower Master Plan to include the Hyatt Hotel plan? Because what you just said was the smartest suggestion that has ever made, I’m so surprised the developers never thought of that.

I’m not sure they can as it may be too late, but why didn’t they think of this long ago? Surely, they saw this coming, right? When they proposed the 3TwentyOne tower with Suntrust, there was a hotel also planned for the tower. They removed the office space and hotel for just residential. Well, I say they should have not removed the hotel piece in the first place. Only the engineers and architects could tell you whether or not they could include the hotel now, but it make sense.

The entire structure would have to be redesigned for additional height (and weight) as well as additional parking needed for a hotel.