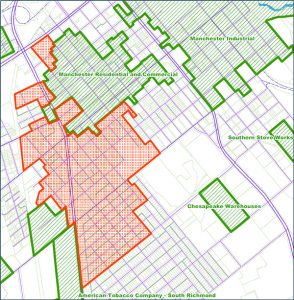 A map of the proposed boundary expansion, shown in orange. Existing historic districts are in green. (City of Richmond)

The Virginia Department of Historic Resources announced Wednesday it is postponing a presentation that was scheduled later this month on a requested broadening of the Manchester Residential and Commercial Historic District, due to the notification error and a suggestion from federal regulators to make the proposal more specific to the Blackwell neighborhood.

A special meeting on the proposal is now scheduled to be held 1p.m. Wednesday, Oct. 10 at New Life Deliverance Tabernacle, 900 Decatur St. in Blackwell.

DHR Director Julie Langan said her office is working to revise the proposal as a Blackwell-specific historic district, rather than an expansion of the existing Manchester district.

Langan said the change was recommended during recent discussions with the National Park Service, which administers the National Register of Historic Places. She said a new reviewer with that agency suggested the change due to the size of the proposed expansion area and Blackwell’s established identity as a neighborhood distinct to Manchester.

“We felt like an amendment was the correct approach,” Langan said. “But the fact is that we talked to the person who’s going to make the decision, and he has said: ‘I don’t agree with how you’re doing this; I think you should do a separate district.’ So that’s what we’re going to do.”

Langan said she supports the change in approach even though her office had proposed the expansion – a process initiated by a request from Michael Hild and Laura Dyer Hild, whose Church Hill Ventures has been on a redevelopment streak with properties eligible for state and federal historic preservation tax credits.

In June, when DHR delayed the proposal three months in response to concerns that area residents and property owners were not aware of it, Michael Hild sent an email to Langan stating the delay could prevent planned investment in the area that he said was on track to exceed $250 million.

Attempts to reach Hild for comment on the additional delay were unsuccessful Wednesday.

The revised proposal would call for several properties closer to the Manchester boundaries to be added to that district, while the bulk of the proposed 155 acres spanning about 60 city blocks would be designated as the Blackwell Historic District. The proposal also includes properties in the Swansboro neighborhood across Semmes Avenue from the existing 75-acre Manchester district.

“This provides us the opportunity to emphasize Blackwell, to elevate its profile more than if it was just an appendage to an existing district,” Langan said.

She said the approach to adding the Blackwell properties is not as important as their addition to the state and federal historic registers – a process DHR had recommended but could not initiate on its own, Langan said.

“There’s not one way that’s right and one way that’s wrong,” Langan said. “The way I’m looking at this is we want to do it the way that’s going to get it across the finish line the fastest.”

Langan said the additional time is also needed to fulfill a public outreach campaign that DHR has been running since June.

She said DHR had contracted with a third-party mail service, VCU Mail Services, to distribute notification letters to area property owners on a mailing list. She said a miscommunication resulting from a staffing change caused an error in which letters were not sent to a “major portion” of the owners on the list.

“The failure explains why many residents failed to receive letters notifying them of September’s public quarterly meeting …” DHR said in Wednesday’s announcement, referring to complaints of property owners not receiving mailed notifications that prompted the three-month delay in June.

The Manchester area has been a hotbed for public debate of late. Last month, a proposal to relocate a homeless shelter to Manchester was met with pushback from residents and developers before the deal fell through.