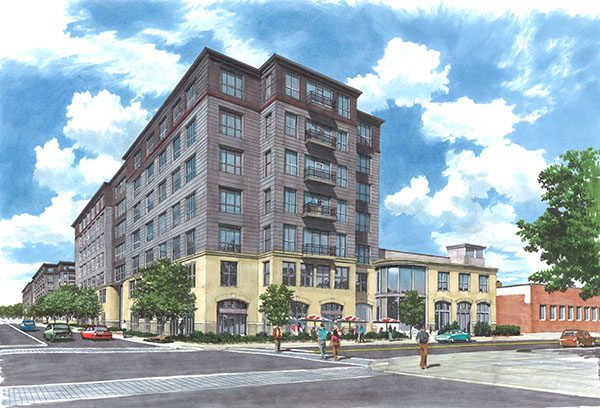 A rendering of the Scott’s View project, where Virginia Commonwealth Bank is hoping to open a new branch on the first floor. Scott’s View is slated to open in late 2019.

Despite pulling the plug on a planned downtown branch and closing a location in Hopewell as part of a round of expense cuts, a Richmond bank is moving closer to a deal for an outpost in Scott’s Addition.

Virginia Commonwealth Bank is negotiating a lease for a 1,300-square-foot branch on the ground floor of Scott’s View, an $80 million project that developers Louis Salomonsky and David White have under construction on 2.5 acres at 1400 Roseneath Road.

VCB President Frank Scott said the bank, which last year merged with Bank of Lancaster from Kilmarnock, is looking to capitalize on the neighborhood’s momentum. 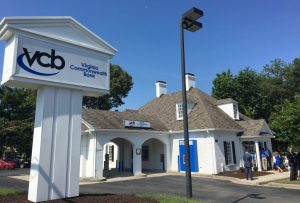 VCB’s branch in the West End, which opened in the fall of 2017. (Bizsense file photo)

“We like what’s going on there,” Scott said. “We’ve made some rehab loans (in the neighborhood) and got familiar with the area. We thought the potential was great to make a lot of great banking relationships.”

Scott said the branch, which will have visibility at the corner of Roseneath and West Clay Street, will feature an open floor plan without traditional teller lines, a trend in banking aimed often at appealing to millennials.

The bank has hired architect Alan Davis from Baskervill to design the branch. It’s expected to open in the second half of 2019.

VCB’s plans in Scott’s Addition are coming together as the bank also is carrying out a round of expense-cutting measures announced last week.

Those include the closure of its Hopewell branch at 1421 W. City Point Road and scrapping a plan it was considering for a location in downtown Richmond.

Regarding the Hopewell branch, CEO Randy Greene said the bank looked at branch analytics and traffic figures, and determined its operations can be consolidated into its Colonial Heights branch, which sits about 10 miles west.

The Hopewell branch held around $25 million in deposits as of June 2017, the most recent figures on file with the FDIC. That’s the smallest of any of VCB’s 18 locations. The bank leases the Hopewell building and the closure will coincide with the lease expiration.

The bank expects annualized savings of $200,000 after the closure, which is set for March 31.

“It was just prudent business,” Greene said of the move in Hopewell.

The bank also is offering early retirement packages to some of its 200 employees.

That program is voluntary, Greene said, and 25 employees are eligible to participate should they choose. The bank estimates that effort would save $500,000 annually beginning in the first quarter of 2019.

The company said it then would further assess its staffing levels based on the results of the early retirement offering.

A “management restructuring” also is in the works, the bank said, that is expected to save $700,000 annually. It would not comment on specific positions that have or will be effected.

It expects to shave another $400,000 by discontinuing its contributions to certain employee benefit plans, include its employee stock ownership plan.

Another $140,000 would be saved as a result of unspecified “corporate governance changes” that are planned for the second quarter of 2019.

VCB and its publicly traded parent company Bay Banks of Virginia reported a profit of $946,000 in the second quarter, up from $557,000 in the same period a year ago. It is approaching $1 billion in total assets.

Its non-interest expenses were $8.5 million in the second quarter, up from $7.1 million a year ago.

Referring to its plan to cut costs, CFO Judy Gavant said, “The company is setting itself up to be a stronger, more profitable bank.”

As for Scott’s View – which will consist of a seven-story building at the corner of Roseneath and West Clay Street, and an eight-story building closer to the I-195 Broad Street exit – Salomonsky said last week that he hopes to complete the project in late 2019.

He said he’s pleased with the prospect of having VCB as a tenant and the bank’s design plans.

“They are going to have a quality image for the Roseneath frontage,” Salomonsky said. “They’re doing a classy job.”

He said he has at least one other commercial tenant in negotiations for space at Scott’s View – what he described as an unnamed gourmet grocery store with a café and patio.

“I’m working for upper image at the intersection,” he said. “It’s going to be one of my best projects.”

He and White plan another big project, as they’re under contract to purchase the former Quality Inn & Suites building at 3200 W. Broad St. from Better Housing Coalition for an undisclosed sum.

The developers have not yet disclosed their plans for the site.

saw this and was hoping it was C&F bank. Ah well.